It's been a big year for American men's soccer. The national team surprised most everyone by winning its group -- with England, Algeria and Slovenia -- at the World Cup in South Africa. It also had a legitimate shot to advance to the semifinals for the first time since 1930, when a mere 13 countries participated. Although Landon Donovan & Co. fell just short against Ghana in a tough loss, that did little to damper the enthusiasm for the sport that gripped the U.S. during the tournament. Meanwhile, MLS took another big step forward, thanks to high-profile player signings and an exciting playoffs.

Our five favorite moments from a memorable 2010:

Although the Rapids weren't the sexiest or most gifted team in the league, and although they won it with a little luck, Colorado maximized its talent under the shrewd stewardship of Gary Smith. That's not to say the Rapids never dominated or displayed dazzling soccer, because they were capable of that too. But most of all, they were a likable bunch of guys who had been working toward a championship for years, spurred on by a dedicated and deserving base of fans.

Aside from the blown call by Malian referee Koman Coulibaly, which wiped a last-gasp U.S. winner off the record for a phantom foul, the American comeback will be this match's enduring legacy. The U.S. fell behind 2-0 in the first half, a score that looked to doom its chances of making it into the next round. But after several close calls, Donovan managed to pound the ball into the roof of the goal; in the 82nd minute, Michael Bradley did the same to keep the U.S. team's World Cup dream alive. 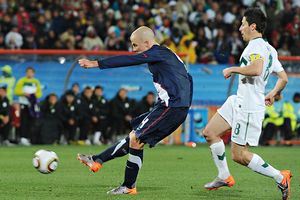 Major League Soccer's credibility received a boost when the Red Bulls snapped up French forward Thierry Henry and Mexican midfielder Rafa Marquez in the summer. Critics contend Henry has lost a step. Fair enough. But he is still a delight to watch. Marquez, meanwhile, is the first player of his caliber to join the league at the peak of his powers. His best goal of the season was also his first, this rocket against Toronto.

2. Clint Dempsey's equalizing goal, thanks to a little rub of the Green

The U.S. had gotten its World Cup off to the worst of starts, allowing Steven Gerrard all the space he needed to put England ahead 1-0 in the fourth minute of each team's opening group game. Then the soccer gods smiled on the U.S. in a way not seen since the Americans upset the English 1-0 in the 1950 World Cup. In the 40th minute, forward Clint Dempsey twisted and turned, turned back and twisted some more before hitting an innocuous shot from about 25 yards from the goal. The ball skipped right in front of Robert Green and, well, you know the rest.

It was almost midnight, the situation dire. The U.S. was in the 91st minute of a 0-0 game with Algeria, its final group stage game in South Africa. As it stood, the U.S. would be eliminated from the World Cup after a fortuitous draw against England and an unlucky draw with Slovenia. Versus Algeria, chance after chance fell short, while an overzealous linesman robbed Dempsey of a goal. And then -- that moment of moments, the undisputed highlight of the year in American soccer, and some (including SportsCenter) say the American year in sports -- Landon Donovan getting on the end of the ball to sweep it into the back of the net and send the U.S. into the next round. The goal captivated an entire country, as this YouTube video so poignantly illustrated.

The Honduran-born, 17-year-old midfielder was the lone bright spot in D.C. United's dark season, and he has a chance of becoming the best player ever to come out of MLS, as this highlight reel suggests.

It was an all-American story: Wondolowski transcended his modest talents to lead MLS in scoring (18 goals) and carry the San Jose Earthquakes to the Eastern Conference finals. His biggest goal? The game winner against New York in the conference semifinals.

The Scottish-born midfielder overcame potentially soul-crushing setbacks -- three unsuccessful trials in England, two broken legs and an attack by thugs outside a club -- to break out as Bolton's playmaker and become a front-runner as the next USMNT star.