SOCHAUX, France -- Fourteen months after sustaining nearly fatal injuries in a car accident, Sochaux forward Charlie Davies is hoping for a return to action in the French league this weekend.

The 24-year-old American, who missed this year's World Cup after failing to recover from his injuries, says he is now at "90 percent" and ready to play against Bordeaux on Saturday.

Davies was a passenger in a car accident Oct. 13, 2009, in which another passenger died. He was left with two broken bones in his right leg, a broken and dislocated left elbow, a broken nose, forehead and eye socket, a ruptured bladder and bleeding on the brain. 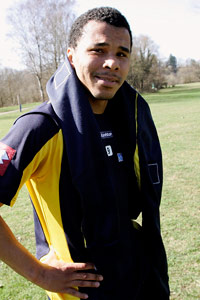 AP Photo/Mathieu CugnotCharlie Davies hopes to return to the field this weekend from the car accident that nearly took his life.

Davies played in several exhibition games for Sochaux in July and has since taken part in several matches with Sochaux's reserve team. His last competitive match was the United States' World Cup qualifier at Honduras on Oct. 10 last year.

"I'm feeling good. Physically I haven't felt this good in a year or so, so I'm feeling like my old self which is great because that's the most important thing because we all know the football will come by itself," Davies said. "I'm sure, if I could just get a few minutes out on the pitch, then I could make the most of that chance."

Davies has started to score again with the Sochaux reserves and is hopeful he will be rewarded with a chance to dress against Bordeaux.

Playing on Saturday night would bring back nice memories to Davies, who celebrated his home debut with Sochaux last season by scoring twice against Bordeaux.

"I really can't think of a better way to make my comeback than against Bordeaux, in the game where it all began, and come back after over a year out of the game against one of the top teams in France," Davies said. "It would be astonishing to finally get my chance."

But Davies is facing a sharp competition from strikers Brown Ideye and Modibo Maiga, a situation that has led Sochaux coach Francis Gillot to suggest it might be better for the American to leave the club on loan after the winter break.

"There are two guys ahead of me in the pecking order who are scoring goals left and right and playing well together, as well," Davies said. "But if I could get 15 or 20 minutes and make a difference and turn a few heads and suddenly people would be thinking, Sochaux with Bobby [Brown], Modibo and Davies, have three strikers that can all contribute and offer different things. I don't know which way it's going to go, so I can't really say anything about a loan just yet."

Davies was fined $1,040 in October and his license was suspended by French police because of a speeding violation in which he said a teammate was driving.

He reiterated his desire to play in the Premier League in the future.

"My long-term goals have definitely not changed, they're just maybe taking a little longer to achieve," he said. "But in terms of moving to England and hoping to play for Arsenal one day and making a difference with the national team and helping the USA to a top-four finish at the World Cup and just to be that player that everyone can count on, that hasn't changed at all."