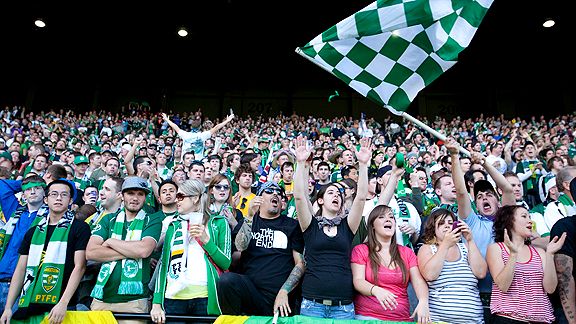 Jonathan Ferrey/Getty ImagesWith such a dedicated fan base and rich soccer tradition, Portland will have a memorable '11 season.

Expansion in Major League Soccer is a complex sort of business.

In most companies, new branches spend the first few years leaning on older ones for support until they can stand on their own feet. In MLS, funny enough, it has been largely the other way around of late -- the newer franchises helping to keep the old ones healthy.

Three of the four league leaders in home attendance last year were the most recent expansion teams: Toronto FC, 2007; Seattle Sounders, 2009; and Philadelphia Union, 2010. (That's discounting the San Jose Earthquakes, which rejoined the league in 2008 after its previous incarnation left for Houston in 2005.) It's quite likely that next year the much-hyped additions of the Vancouver Whitecaps and Portland Timbers will be among the leaders in attendance.

The average league attendance, meanwhile, has remained fairly constant during this spell of highly successful expansion. In 2006, before Toronto, Seattle and Philadelphia joined, the league pulled in an average of 15,404 fans per game. In 2010, that number was 16,675, having hovered around 16,500 for every year in between. That said, if the three expansion teams are taken out of the equation for 2010, attendance would have fallen to 14,685 per game for the league. In fact, Seattle alone -- the gold standard for expansion with its 36,000-plus home crowds -- added 1,300 fans per game to the league average last year.

In a sense, only the expansion branches are preventing a decline for the MLS company as a whole. But it would be a mistake to conclude that the newer franchises are simply better or that the original franchises were poorly selected.

"There are a lot of factors that are going into the success of teams, but I don't think it means that the wrong markets were selected initially," said MLS president Mark Abbott, who was the league's first employee and has overseen franchise selection and expansion ever since. "I think it reflects a different time. The league was clearly at a different point in its evolution. The environment we functioned in back in 1996 [when the league started] and 1997 is a lot different than the environment we function in today. That's natural. Whenever you start a business, including a league, the early days are challenging."

The original teams and the early expansion teams have laid a foundation of stability, allowing new teams to get a running start and build up buzz.

"It's not at all surprising that the expansion franchises are among the top of the league [in attendance]," said Gary Roberts, dean of the Indiana University School of Law-Indianapolis and an expert in sports business and expansion. "Usually expansion franchises do well. For the first few years, those expansion teams do very, very well because there's a novelty factor to them. Most expansion teams have a honeymoon period of a few years to build a good, consistent, quality team and win their share of games."

Whereas many original MLS teams needed that honeymoon period just to make people aware that they existed, newer expansion teams can exploit it for cementing a fan base that in most cases was already there and clamoring for a team. It's a luxury older clubs didn't have.

That is all to say that newer teams are reaping benefits of dues paid by the older ones.

"It reflects our strategy over the last 10 years, the move to soccer-specific stadiums and the adoption of the designated player rule, the investment our teams have made in television and digital media," Abbott said. "It's a combination of the changes in the marketplace and the execution of our strategy. When new clubs come in now, it's just in a different environment than it was 15 years ago. The league has grown significantly…and the expansion teams have entered at a time when the league and the sport is more popular then when the league first began. It reflects a different time in the life cycle of the league and the strength of the league itself."

The art of managing that life cycle has been to monitor the league's growth carefully. Overzealous expansion is a killer, as demonstrated by the defunct National American Soccer League, which quickly overinflated and popped. Critics might wonder if MLS is expanding too rapidly, but the league has avoided growing beyond its means. 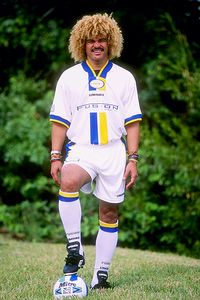 Zoran Milich /AllsportCarlos Valderrama played for the Miami Fusion in its inaugural season, 1998. The club closed up shop after the 2001 season.

Part of the reason the successful expansion teams weren't among the league originals or added in the first rounds of expansion -- which saw the Chicago Fire and since-contracted Miami Fusion added in 1998 and Chivas USA and Real Salt Lake in 2005 -- is simply that those markets weren't ready for MLS teams.

In spite of the newer teams picking up the originals' slack in terms of attendance, the league's increased stability has led to a streak of four consecutive seasons in which average league-wide attendance was at least 16,000. That makes this the most successful period in the league's history, each of the last four seasons outdrawing all pre-2007 editions, save for the 1996 opening season, when average attendance was 17,406.

Over the years, MLS has expanded wisely. Its only demerit has been the Miami Fusion, which failed four seasons after joining the league. An independent study of ideal MLS cities, based on economics, conducted by the University of San Francisco in 2004 found that the 10 MLS franchises in existence at the time were all within the 25 most desirable soccer towns in the U.S. The study also indicated that Miami and Tampa had been very poor choices for franchises, justifying their contraction.

Since the study came out, MLS has added teams to three more cities that landed in top 20 cities (Philadelphia, Houston and Seattle) and two in Canada (Toronto and Vancouver).

It should be noted that one 2011 expansion city, Portland, was ranked 24th, below the contracted Miami and Tampa. "I don't think Portland is going to turn out like Seattle," the study's author Daniel Rascher told ESPN.com. "Seattle is a larger market with a high income and more purchasing power."

That said, every post-Miami expansion has made MLS a stronger league, and that trend looks like a good bet to continue. Unlike the old NASL, in which each expansion team seemed to make the league a little worse, the momentum generated by each successful MLS addition makes the league stronger.

The more, the merrier, in other words.