CARSON, Calif. -- Juan Agudelo and Teal Bunbury gave a young United States team some energy in the Americans' first match of the year.

Agudelo was tripped up during a run into the penalty area, and Bunbury converted the kick in the 75th minute for his first international goal, giving the U.S. a 1-1 exhibition tie against Chile on Saturday night. 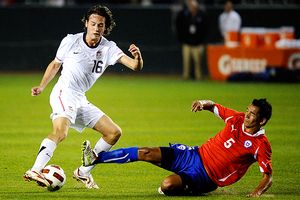 Agudelo and Bunbury, a pair of players who made their Major League Soccer debuts last season, entered in the 60th minute in place of Brek Shea and Chris Wondolowski.

"They both gave us a good effort," U.S. coach Bob Bradley said. "They seemed to be into the idea that when they came onto the field, they needed to make a difference."

Estaban Paredes, the only player on either roster to play at last year's World Cup, had put La Roja ahead in the 53rd minute with a 7-yard volley inside a post, off a cross from Felipe Seymour after defender Marvell Wynne overcommitted.

Agudelo, an 18-year-old forward who like the 20-year-old Bunbury made his debut in November's win at South Africa, was tripped one stride into the penalty area by Sebastian Toro. Bunbury, whose father Alex scored 16 goals for Canada from 1986-87, slotted the penalty kick in as goalkeeper Paulo Garces dived the wrong way, to his right.

Because it was not a FIFA fixture date, both teams went with youth and did not bring in established players from Europe. The U.S. will use veterans for its next three matches: at Egypt on Feb. 9, against Argentina on March 26 at East Rutherford, N.J., and versus Paraguay three days later at Nashville, Tenn.

As the U.S. prepares for the CONCACAF Gold Cup in June, Agudelo and Bunbury are trying to earn roster spots alongside Jozy Altidore.

"I feel really comfortable playing up top with him," Bunbury said of Agudelo. "I feel like our chemistry is really growing."

Midfielder Alejandro Bedoya, cut from the World Cup roster, was the most experienced player on the field for the Americans, making just his seventh international appearance. The entire American starting lineup entered with a combined 18 appearances and 23-year-old midfielder Dax McCarty was captain for the first time. Central defenders Tim Ream and Omar Gonzalez had each played only one national team game.

"Getting to see all of the new, young guys out there was fun for me and, hopefully, it was fun for everyone else," Gonzalez said. "I thought that we did well. We wanted to win, but a draw is a good result so, all in all, I think that everyone did a good."

Seven U.S. players made their national team debuts, including four starters: right back Sean Franklin, left back Zach Loyd, midfielder Jeff Larentowicz and Wondolowski, the lone forward in a 4-2-3-1.

"The first five-to-10 minutes it's really fast," Loyd said. "I was all excited, and after that you just get relaxed and your teammates are always talking to you and giving you confidence along the way."

Sean Johnson, who took over in goal at the start of the second half, also made his international debut, as did defender Anthony Wallace, who entered in the 73rd, and midfielder Eric Alexander, who came on in the 83rd.

"Chile puts pressure on you," Bradley said. "There were some periods where our ability to stay tuned in, move quickly and be in good spots broke down. But there was also a strong response when we were down, and I felt that was quite good."

The match may have been the finale for popular Chile coach Marcelo Bielsa, who said in November he was resigning. There is hope in Chile he may reconsider because Sergio Jadue took over as federation president instead of Jorge Segovia.

"This subject is tiresome," said Bielsa, who added he will address the situation next week in Chile.

When asked whether he had the support of Chile's players, media and fans, Bielsa replied humorously.

"What would you think if I told you this?" Bielsa said. "Imagine if I said, 'What's happening to me has never happened before in the world, despite my being Argentine?' "