LIVERPOOL, England -- Chelsea has broken the British transfer record, signing Fernando Torres from Liverpool for a fee reported to be 50 million pounds ($79.5 million).

Monday's deal is soccer's third-most expensive transfer, exceeded by Real Madrid's 2009 purchases of Cristiano Ronaldo from Manchester United for 80 million pounds ($131 million) and Kaka from AC Milan for 65 million euros ($92 million). It will be a similar figure to that received by Inter Milan when the Italian side team sold Zlatan Ibrahimovic to Barcelona the same year, a deal that sent Samuel Eto'o to Inter.

"Liverpool Football Club tonight confirmed they have agreed a fee with Chelsea for the sale of Fernando Torres," a Liverpool statement said.

Liverpool, purchased last fall by the parent company of the Boston Red Sox, described Torres' move Monday as a "British-record transfer fee" after he signed a 5½-year deal with Chelsea. Manchester City forward Carlos Tevez was recognized as being the previous most expensive signing within British soccer after moving from Manchester United for about 47 million pounds (then $76 million) in 2009.

Torres scored 81 goals in 142 games during 3½ years at Liverpool but grew frustrated as the 18-time English champions struggled to keep pace with England's leading clubs. Liverpool has not won the league since 1990.

"I am very happy with my transfer to Chelsea and I am looking forward very much to helping my new teammates this season and for many years to come," Torres said. "Having played against Chelsea many times since coming to England, and in some very big games I will never forget, I know there are many great players here and I will work hard to win a place in the team. I hope I can score some important goals for the supporters to enjoy this season." 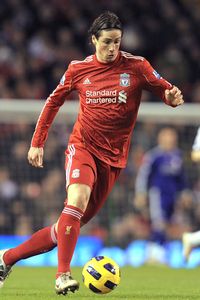 Andrew Yates/AFP/Getty ImagesEx-Liverpool forward Fernando Torres of Spain makes a run against Fulham during an English Premier League match at Anfield on Wednesday.

Torres' first game for Chelsea is likely to be against Liverpool at Stamford Bridge on Sunday. he joins a Blues roster that already includes Didier Drogba and Nicolas Anelka.

"This is a very significant day for Chelsea, capturing one of the best players in the world with his peak years ahead of him," Chelsea chairman Bruce Buck said. "We have long admired the talents of a player who is a proven goalscorer in English football and Fernando's arrival is a sign of our continuing high ambitions. I hope every Chelsea fan is as excited as I am with this news."

Liverpool replaced Torres by breaking the club's record transfer fee twice in the space of a few hours to sign Luis Suarez from Ajax and Andy Carroll from Newcastle -- for a combined total of 58 million pounds ($93 million).

Torres, whose contract at Liverpool was due to expire in 2013, has regained some form over the past few weeks after struggling early in the season as he recovered from a groin injury.

Three of his nine goals this season have come in the past four games. Overall, he has struck 81 goals in 142 games for Liverpool.

Torres remained one of the most sought-after players in world football despite a disappointing contribution to Spain's World Cup win in South Africa last year. In 2008, he scored the winning goal in Spain's 1-0 victory over Germany in the European Championship final.

Chelsea manager Carlo Ancelotti will have an embarrassment of riches up front if Torres completes his move, but how the Italian coach aligns his team remains to be seen.

Torres appears to be a better long-term option than Drogba, who turns 33 in March and hasn't been as prolific this season as he was when he scored 37 goals for Chelsea last term.

Torres looks to have lost patience with Liverpool after its poor form over the past 18 months. The Reds finished seventh in the Premier League in 2010 and made their worst start to a campaign for 56 years this season.

With the prospects of silverware slim at Liverpool, Torres will be hoping to win trophies at Chelsea, the defending Premier League and FA Cup champion.