After a flurry of activity on Monday, the January transfer window is closed. Clubs won't be able to wheel and deal again until the summer. In the meantime, many teams will now have to adjust to new players joining their squads or key players leaving town. Here are the five big questions facing a few clubs in the English Premier League.

1. How will Chelsea line up with Fernando Torres?

Chelsea's recent form suggested that its squad needed improvement, but few would have predicted the arrival of a 50 million pound striker a couple of weeks ago. Put simply, Fernando Torres doesn't fit into the 4-3-3 formation Carlo Ancelotti has favored this season -- neither Torres nor Didier Drogba would be happy playing wide, and neither would be at his best if he did.

Therefore, Torres' arrival will yield a change to a formation featuring a Torres-Drogba strike duo, with Nicolas Anelka being demoted to the bench. Ancelotti has always been a fan of a 4-4-2 diamond. He played that system for the majority of his eight years in charge of Milan, and it was also the shape he initially favored in English football before moving toward a 4-3-3 midway through last season.

Before that switch, the 4-4-2 diamond wasn't quite working for the Blues. They didn't have the right players for the system, and they became too easy to play against. There were two problems. First, they lacked an attacking right back to provide width from deep because of Jose Bosingwa's long-term injury. But he's now back and up to full fitness. Second, neither Michael Ballack nor Deco were capable of providing the energy needed for the "shuttler" role on the right side of the diamond, which involves acting as a central midfielder when out of possession, and as a right-sided midfielder when in possession.

However, the summer signing of Ramires plugs that gap perfectly. He impressed for Benfica and Brazil last season by playing in that very role, and a change to a 4-4-2 diamond would delight him. Florent Malouda and Frank Lampard would be less pleased; Malouda prefers to drift in from a left wing position, while Lampard likes breaking forward from a midfield three.

Another issue is at the back. New signing David Luiz is very much a left-sided center back (in fact, he's been used as a left back at various points in his career), which might be a problem considering John Terry likes to play on the left of a central defensive duo. Terry's poor World Cup was partly blamed on his having to shuffle across to the right to cater for a left-footed partner, Matthew Upson, and the Chelsea captain won't take kindly to a shift in position.

2. How will Liverpool adapt to the signings of Andy Carroll and Luis Suarez?

In theory, they make an excellent front two. Carroll is big, strong and powerful in the air, and also possesses good technical characteristics, while Suarez is more of a small, nippy, skillful player.

A 4-4-2 would cause havoc throughout the rest of the side, however. In central midfield, Steven Gerrard, Raul Meireles and Lucas Leiva would be scrapping for two positions, with probably the least talented of the three, Lucas, who would have to be included for reasons of balance. The (ultimately unsuccessful) pursuit of Charlie Adam also makes little sense if Liverpool were planning on fielding just two central midfielders.

So with nothing to suggest Kenny Dalglish would play a diamond in midfield, it looks like he'll go with a 4-3-3. Carroll would be the main striker, while Suarez would be used in a wider position, something he's more than capable of doing. He's spent the season at Ajax drifting in from the right, though is probably also able to play on the left.

This would leave Joe Cole, Dirk Kuyt, Milan Jovanovic and Maxi Rodriguez competing for the final attacking spot. All these players are more suited to a 4-3-3 than to a 4-4-2, further underlining the feeling that a 4-3-3 (or possibly a 4-2-3-1 upon similar lines) will be Dalglish's choice.

3. How will Newcastle score without Andy Carroll?

No other Premier League club has fans who are so insistent upon having a powerful central striker to bang the goals in. The Newcastle No. 9 shirt is one of the most famous in English football, having been worn by legendary figures Jackie Milburn, Malcolm MacDonald and Alan Shearer. Local lad Carroll was supposed to be the new hero.

The board (if not the fans) have been more than compensated with a staggering 35 million pound transfer free, but that was not reinvested in the side, and so Newcastle has effectively lost its most important player with no replacement.

Shola Ameobi, Leon Best, Peter Lovenkrands and Nile Ranger will compete to play up front, and one of them will have to step up -- not just in terms of goals, but to provide the strong aerial presence Carroll gave, and to act as a focal point for Newcastle's attacks.

Goal scoring is a worry, however. Ameobi has never been prolific, Best has scored in only one game in the past 12 months, Lovenkrands is more of a wide forward than a striker, and Ranger is yet to start a Premier League game. Luckily, Newcastle has the highest-scoring midfielder in the league, Kevin Nolan, but many of his goals came through his relationship with Carroll. Scoring will be difficult for Newcastle, which in turn means keeping it tight at the back becomes even more important. 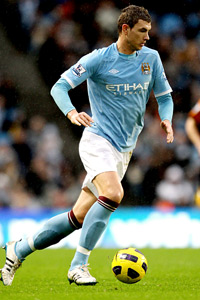 Alex Livesey/Getty ImagesEdin Dzeko is a great signing on paper for City, but it's going to take him time to learn to play alongside Carlos Tevez.

4. Where does Edin Dzeko fit in at Manchester City?

It's almost a month since he signed, but this question has not yet been answered. Carlos Tevez has spent the season up front in a 4-3-3, and over the past 12 months, he has arguably been the Premier League's most consistent player. The arrival of a central striker leaves Roberto Mancini with a question about how to accommodate the two.

In the recent defeat to Aston Villa, Mancini started with Tevez on the left in the 4-3-3, and then tried Dzeko out there. Neither player looked completely comfortable, and City failed to score. It's likely that Mancini will persist with this option for another couple of weeks, but if playing the two in a 4-3-3 doesn't yield decent results soon, he'll be forced to change his system, which would be a shame as City was finally starting to look cohesive.

The most logical option is for Tevez to play a narrow left-sided role, with width provided by Gareth Barry from midfield and Aleksandar Kolarov from defense. But that's still taking Tevez away from the false nine role -- one that sees him cover lots of ground thanks to his unwavering work rate -- that he's played superbly this season. Dzeko is a great signing on paper, but he prefers to play in a strike duo. It's going to take time for him to adapt to City's shape.

5. How will Aston Villa line up?

Villa is one of the transfer window's big winners -- four players in, no major stars out. Darren Bent becomes the focal point for the attack, on-loan Kyle Walker gives another option at right back, while Jean Makoun and Michael Bradley provide energy in the center of the pitch. Villa's squad looks considerably stronger than it did this time last month.

Gerard Houllier has so many options -- and a few versatile players -- that it's difficult to know where to begin when considering his formation. But a 4-2-3-1 looks most likely judging by his recent lineups. With Bent a certain starter and a back four in place, Ashley Young, Gabriel Agbonlahor, Stewart Downing and Marc Albrighton will be competing for three positions, while Makoun, Bradley, Stiliyan Petrov and Nigel Reo-Coker will be fighting for two. Add in a couple of veterans (Emile Heskey, Robert Pires) and some promising youngsters (Barry Bannan, Nathan Delfouneso, Fabian Delph) and Houllier has plenty of competition for places, but is also likely to have a few unhappy figures in his squad.