A valentine to Wayne Rooney 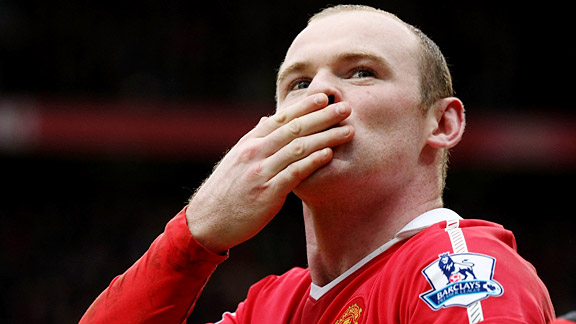 Now we know why that purple-faced meanie, Sir Alex Ferguson, played nice with Master Wayne during their contractual smackdown in October. Rather than telling his Prodigal Striker never to darken the gates of Old Trafford again -- as he had done with David Beckham, Roy Keane and just about any other player who felt he was too big for his United shirt -- Sir Alex kept faith with Rooney.

And continued to do so despite the fact that for the past 11 months Wazza needed a seeing-eye dog to find the back of the net and United had a cold-eyed Mexican sharpshooter waiting in the wings.

Ferguson is nothing if not a pragmatist and a true believer in the old soccer maxim: Form is temporary, class is forever. After all, ever since that ankle injury this past March, Rooney's once-fearsome finishing ability has been cohabitating in the witness protection program with Tiger Woods' swing. If any further evidence was needed of his current malaise, Rooney offered it up in hapless abundance for the first 77 minutes of Saturday's Manchester derby.

From the early moments, when a bone-rattling challenge by City's resident hard man, Vincent Kompany, turned Rooney into a human Exocet missile, Wazza had the look of a man spoiling for a fight rather than someone focused on his craft. His passes routinely went astray, his runs were mistimed and his tackles bordered on the reckless. As Rooney himself was to admit to reporters later: "To be honest, I wasn't too pleased with my overall performance today."

With the exception of his flick-on in the buildup to Nani's opening goal, Rooney was a peripheral figure in the United attack, isolated up top and struggling to imprint himself on the game. In fact, just before United launched the sequence of passes that would result in Rooney's unforgettable finish, the cameras panned to Michael Owen, last season's Manchester derby hero, warming up on the sidelines, likely in anticipation of replacing The Forlorn One.

Almost on cue, Rooney hit a poor chip that only the sure touch of Paul Scholes could keep from derailing the move. And then came the 77th minute.

Wayne Rooney -- the game-changer who lost his way in South Africa -- finally returned to the ranks of world-class strikers by conjuring up a piece of improvisational genius that even had this hardened Arsenal fan banging his glass of Stella on the bar in awed appreciation. It's not too much of a stretch to say that years from now, long after Sir Alex has abdicated and even Ryan Giggs has stopped messing with Father Time, that anybody in thrall to the wonder of soccer will ask each other "Where were you when Rooney scored that goal?"

I was at my local pub awash in a sea of the wrong red shirts when the ball whistled off Rooney's right foot (only a Liverpool fan would say right shin) and into the back of the net. The roar that went up was so loud and primal that I thought the beer taps would spontaneously combust. (Fortunately, they didn't.)

My friend Luke Dempsey, a born and bred Manc who named his daughter after the legendary Eric Cantona, spoke for all United fans when he proclaimed: "God can take me now and I wouldn't complain."

I reminded Luke that he had said the same thing right after Dimitar Berbatov scored on a glorious overhead kick against Liverpool earlier this season.

"There's a difference," he explained. "As great as Berba's goal was, it was the second of a hat trick, it hit the underside of the bar and it didn't prove decisive. In other words, it didn't meet Cantona's criteria that a good goal is one that is important and beautiful."

Rooney's masterpiece, which was both the game winner and impossibly gorgeous, not only qualified for admission to Cantona's pantheon but also to Ferguson's. "We've had some fantastic goals down the years at Old Trafford," Sir Alex declared in his postmatch press conference, "but the execution of that goal, you'll never see that again."

What took the breath away was the otherworldly combination of athleticism, technique and confidence on display. Nani's cross from the right flank was targeted for Rooney's head but a slight deflection caused it to spin behind the striker. In a split second, Rooney had both the physical and mental dexterity to adjust his body to the altered flight of the ball, turning his back to goal and launching himself off the ground in a sliver of space between Kompany and Micah Richards. So ferocious was the power with which Rooney's right instep met the dropping orb that Joe Hart never moved a muscle before picking the ball out of the net.

When Rooney scored his brace against Aston Villa two weeks ago -- only his fourth goal from open play this season -- his celebration had been rather muted, as if he knew he still wasn't back to his old menacing self. But not this time. This was a finish of such unanticipated wonder that you could sense the catharsis in his backward-strut-into-a-Messiah-like-pose.

All that separated it from one of Cantona's famous post-goal salutes was the absence of a popped collar and an impish wink. While the Frenchman had exuded cheek, the Englishman radiated defiance.

By scoring a transcendent goal against United's arriviste crosstown rivals and the very team he had used as leverage during his toxic contract squabble, Rooney finally paid his debt to the supporters who had stuck by him during his troubles. "The Manchester United fans deserve that from me," he said of his goal.

Yet before he can be truly redeemed, Rooney needs to prove that Saturday's acrobatic game winner wasn't an isolated moment of brilliance in an otherwise underachieving season. But for now, just like his magical moment Saturday, the Old Trafford faithful are head over heels that Wazza is back.