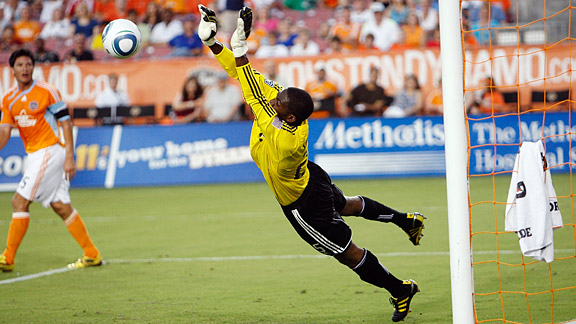 Bob Levey/Getty ImagesOne of the few things that have remained unchanged in Chicago is its starting goalkeeper, Sean Johnson, the 21-year-old who'll be called upon to make the saves this season.

After the additions of Freddie Ljungberg and Nery Castillo, Chicago had its home crowd buzzing. And then, this offseason, Chicago got rid of them -- and other talent, too. No fewer than eight players, some of them legitimate big names, are gone, replaced by a heap of rookies, two unknown Croatians, two unknown Uruguayans, Jon Conway and Cory Gibbs. "Reinvention is risky, and the Fire's makeover is so extensive that its 2011 edition could really be anything at all, ranging from a mismatched bunch of rookies and foreigners to an energetic and skillful collective.

One of the few things that have remained unchanged in Chicago is its starting goalkeeper. As a rookie, Sean Johnson won the starting job from Andrew Dykstra midway through the 2010 season, and Dykstra has since been released. Johnson parlayed his second half into a call-up to the U.S. national team's January camp and a debut in the friendly with Chile. While he has shown potential and has been assured he is the team's No. 1, ahead of new arrival Jon Conway, that's a lot of confidence to have in a 21-year-old sophomore.

3. Where will the goals come from?

While Chicago's 2010 incarnation produced a respectable number of goals (37, third in the East), very few of those came from its forward line. Midfielders Marco Pappa and Baggio Husidic were first and third, respectively, on the team with seven and five goals. The most prolific attackers were Brian McBride with six and Collins John with three. By and large, relying on your midfielders to score goals is an unsustainable model -- just look at the U.S. in the past two World Cups. So where will the goals come from instead? With John and McBride gone, and the Castillo experiment a failure, the burden falls on new 25-year-old Uruguayan strikers Gaston Puerari and Diego Chaves. The Fire think highly of Puerari. Klopas said he could "score between seven and 10 goals and the same amount of assists." Yet he scored just eight times with Montevideo Wanderers over the past two seasons. Chaves, for his part, has six goals in 34 appearances over the past two years.

Chicago had the second-worst home record in MLS last year, scoring the second-fewest goals (14) and winning just four of its 15 games there. Only D.C. United had fewer home wins, with three. Chicago is eager to turn Toyota Park into the intimidating setting its raucous fans could help make it. But for that to happen, the club's new strikers will have to capitalize on their chances. 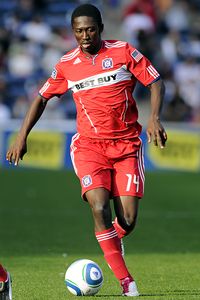 David Banks/Getty ImagesAfter leading the team in assists last year with 10, which was 5th-best in the league, Patrick Nyarko could become the league's best winger.

After leading the team in assists last year with 10, which was fifth-best in the league, the 25-year-old Ghanaian winger could become the league's best at his position in his fourth year. Remember, in 2010, he played through an ankle injury for the second half of the season, yet still managed to take on opponents one-on-one and create opportunities for himself and others.

Chicago has the makings of a good defense, with Gibbs joining the returning Dasan Robinson and Kwame Watson-Siriboe, complemented with highly regarded rookie Jalil Anibaba and Croatian central defender Josep Mikulic. But they will have to find a rhythm quickly. "Of course, it's going to take a little bit of time for some of those guys to gel together," said Klopas. "There were so many pieces we had to put together because we lost so many players. Identifying the guys that can play well together, identifying as soon as possible that group that is going to be your core group and then go with it is going to be a key for us."