Another test for the U.S. 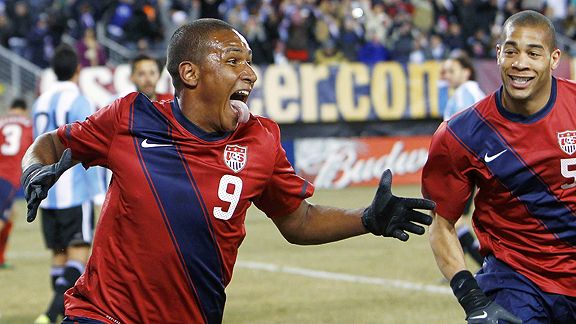 Jeff Zelevansky/Getty ImagesThe U.S. faces Paraguay with the red-hot Juan Agudelo, who has scored the team's past three goals.

After getting an unlikely 1-1 result on grit against Argentina on Saturday night, the U.S. faces Paraguay in Nashville, Tenn., on Tuesday night in the second and final friendly match of this international break.

Here are four key questions heading into this game:

Going on a good run before a big tournament like this summer's Gold Cup is vital. The U.S. rode into last summer's World Cup on the back of wins over Turkey and Australia. They may have been just friendlies, but the matches instilled confidence in Bob Bradley's players that helped the team at the World Cup, where it kicked things off without trepidation against England.

Although the U.S.'s 1-1 draw against Argentina belied the dominance of Lionel Messi & Co., especially in the first half, it was a hard-fought result that the U.S. can build on, said captain Carlos Bocanegra. "Argentina is one of the top teams and we bent but we didn't break. We take some positives away from the [Argentina] game and try to correct a few things that went wrong [when we face Paraguay]."

Paraguay is no pushover, either, as it proved at the World Cup last summer, reaching the round of 16 before losing 1-0 to eventual champion Spain. "We knew in this double-fixture date that we were playing against two very good teams," Bradley said. "Paraguay [is], as we all know, very organized, [has] some very good players."

"I think it's going to be another tough test, and I'm just hoping we can take some confidence from this game," said goalkeeper Tim Howard. "We played well in spurts."

If the U.S. can duplicate its second-half form against Argentina for the Paraguay game, it has every opportunity of going on a nice winning run before facing Spain on June 4 and then starting its Gold Cup campaign on June 7 against Canada.

Much has been made of Bob Bradley's post-World Cup transition from a 4-4-2 to a 4-5-1 formation. Many had been calling for the change, including this author. With a lack of quality strikers and surplus of good central midfielders, the triangle formation seemed to be the logical choice.

Bradley gave the scheme a shot in the past five friendlies, trying it with his regulars against Argentina on Saturday and against Poland and Colombia in October. He also used the 4-5-1 with his second string against South Africa in November and Chile in January.

The verdict has been decidedly mixed. In the first game with the first-string players, the Michael Bradley-Jermaine Jones-Stuart Holden triangle was a success. Later on, it was passable. Against Argentina, it was a meek-looking mixture, as Maurice Edu took the injured Holden's place at the top of the pyramid. In the second half, with Jones leaving the field for striker Juan Agudelo, the U.S. reverted back to a 4-4-2 and looked much better for it.

"We saw in the first half that the understanding between Michael and Jermaine and Mo [Edu], still that needs work," said Bradley. "When Mo got pushed a little bit higher [up the pitch] that puts him in some spots that in the moment probably aren't most comfortable for him."

What became plain to see is that the 4-5-1 is a good idea only when Holden is present, since he is the only man qualified to play at the top of the triangle. Without him, insisting on playing a 4-5-1 is just as foolhardy as setting up in a 4-4-2 when you have only one good striker. But since the U.S. now has two decent options up top, with rising star Agudelo joining strike partner Jozy Altidore, Bradley could opt to return to a 4-4-2 -- at least until Holden returns in six months.

Edu, for one, would like to see the triangle formation given a bit more time to take root. "In the first half, it was hard to get on the ball," he said. "But in saying that, we've only played a few games and I still believe that it's a system that we could play. I think we just need a little bit of time."

Bradley might not be so inclined. He said that when he returned to a 4-4-2, the U.S. found "a better rhythm and having Juan close to Jozy certainly helped, and it seemed like the understanding in the second half with Mo and Michael was good."

How the U.S. lines up against Paraguay could give us the clearest indication yet of how the U.S. intends to play in the Gold Cup.

Whenever the U.S. finds itself dominated by an opponent, the way it did in the first half against Argentina, it is usually a consequence of an inability to control the ball and influence the pace of the game.

"Argentina came out with such a good rhythm that we got put on our heels," said Bradley. "They've got the ball and they're starting to probe and keep it moving and now we get pushed deeper and deeper. Then we're defending by being tight, and the ability to win the ball and play a good first pass becomes difficult, too, because they press really well." 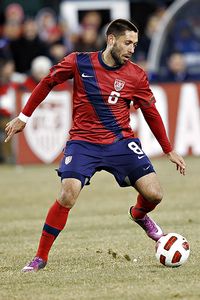 Jeff Zelevansky/Getty ImagesAgainst Paraguay, the U.S. will have to try to take command of the match. To do that, it'll have to get the ball to wingers Clint Dempsey (pictured) and Landon Donovan more often.

Against Paraguay, which like Argentina uses a possession-style game, the U.S. will have to try to take command of the match, giving its wingers, Landon Donovan and Clint Dempsey, more of a chance to get involved and create chances.

"I hope we can push the tempo against them," said Howard. "Argentina, because of the team they are, they were able to dictate a lot of possession, a lot of the play. Hopefully we can go into the Paraguay game and do that to them."

For that to happen, Bocanegra said that the U.S. will have to be tidier on the ball when in possession. "Once we do win the ball, try to make one or two extra passes to break that pressure -- I think we can do a little bit better job with that," he said.

4. Will the youngsters continue to impress?

While getting the formation and approach right is crucial, bringing in fresh faces to start replacing some of the team's aging players (especially in the back line) is equally important. With the past three goals the U.S. has scored coming off the foot of the 18-year-old Agudelo and several young defenders -- Omar Gonzalez, Tim Ream, Timmy Chandler -- showing well in their first outings, the transition is well on its way.

Expect to see more of that on Tuesday. "The turnaround is quick with the Saturday-Tuesday [games]," said Bradley. "So we'll think about some changes and that certainly includes some of the younger players."

In all likelihood, midfielder Mixx Diskerud and defenders Eric Lichaj and Tim Ream will see more minutes. Agudelo could, too, perhaps finally make a start. In the process, Bradley could shed more light on the future face of the U.S. men's national team.