MLS' 10 most valuable players so far

With 10 weeks in the books, the 2011 Major League Soccer season is shaping up to be a memorable one. So we thought we'd stop resisting premature most valuable player speculation and get in on the fun.

Here are, in our view, the 10 players most deserving of MVP chatter with one-third of the season almost gone.

In the final year of his monster $32.5 million, five-year deal, Beckham is finally looking like the player the Galaxy had hoped they would get all along. He's been spraying good crosses and long balls into the clubs' corps of attackers, snapping up six quick assists -- tied for first in the league. He also curled in a vintage free kick against Sporting Kansas City on May 14. This past Saturday, he dropped a free kick squarely on Chad Barrett's head, allowing him to score the lone goal against city rival Chivas USA. At this pace, Beckham could end up with around 15 assists. It may be due to his expiring contract or perhaps the fact that he is fully focused on the Galaxy for once, but either way, Beckham, at 36, is showing that he can still hang. 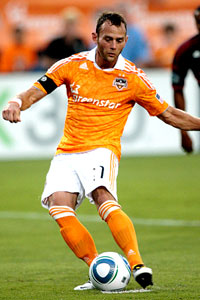 The league's most underrated player and one of its best strikers off the ball, Davis is once again flying largely under the radar in Houston. And once again, there is no justification for his absence from the cognoscenti's consciousness. Davis has six assists, getting them all in a four-game span, tying him with Beckham. On Saturday in Houston, he scored the first goal in a game that later ended 2-2 after the Red Bulls scored a last-gasp equalizer. Although the Dynamo, third in the East, have bled talent almost every offseason, Davis has stayed and helped them remain mostly competitive. He has logged three double-digit assist seasons in five years for the Dynamo, getting 12 in both 2010 and 2009. Yet he has inexplicably dropped out of the national team picture.

After a disastrous return to Europe, where he had started out as a pro, Cooper turned to MLS in 2011 to revive his career, strolling into the welcoming arms of the expansion Timbers, who were desperately seeking a striker. Even if it was a marriage of convenience, the union has been a smashing success. Although his three goals and lone assist in nine games haven't turned heads, Cooper's influence is obvious. He has played in every minute but one of the Timbers' season and has been a headache for defenders all the while, creating room for his teammates as they've stormed to 17 points -- tied for third-most in the league.

Besides adding a legitimate scoring option to a team that set an all-time MLS low for goals scored with 21 last season, Davies, who has scored six times (three on penalty kicks) on a team with 13 total goals, has a quickness that lengthens the field for D.C. and has given it a badly needed big name for the fans to identify with. Among players with at least 10 shots taken, Davies leads the league with a scoring-chance percentage of 46.2 -- which is to say that almost half his shots result in goals. Only Landon Donovan's percentage of 41.2 comes close. And after Donovan, the players closest to Davies stand at 27.3 percent. Also, Davies' 0.94 goals per 90 minutes is best for all players who have appeared in at least five games. 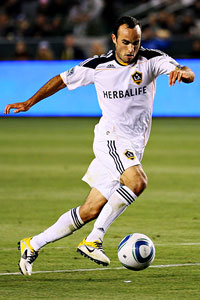 Stephen Dunn/Getty ImagesLandon Donovan's contribution has been even more vital than usual because the L.A. Galaxy's strikers, Juan Pablo Angel and Chad Barrett, have been disappointing.

On April 23, Donovan proclaimed that he'd lost interest in scoring goals and wanted only to win. So naturally, he scored seven times in five games starting that day. That total of seven leads the league and represents a large portion of the Galaxy's 18 goals scored in 13 games, which has the defending Supporters' Shield winners in first place in the Western Conference. Donovan's contribution has been even more vital than usual, because the club's strikers, $1.25 million-a-year newcomer Juan Pablo Angel and Chad Barrett, have been disappointing.

Although it was far too soon to label him a bust, Henry's complete lack of production was cause for concern. He hadn't even scored since Sept. 11, 2010. That was until six games ago, mind you, when the Arsenal legend finally kicked into gear. Since an April 16 breakout 3-0 win for Henry and the New York Red Bulls over the San Jose Earthquakes, Henry has been good for five goals and three assists in five appearances, vaulting him from the brink of abject failure to the short list of the league's most valuable men. Although he missed Saturday's game with a knee injury, Henry's newfound form has much to do with his growing match fitness, which had been poor since he'd arrived, and some cooperation from his chronically ailing Achilles tendon.

Jewsbury might not be quite as popular as the Timbers' talismanic central defender Mamadou "Futty" Danso, who headed in a winner against Philadelphia and an equalizer against Seattle of eerie similarity. But with five assists (third in the league) and two goals (second on his team), Jewsbury has been key to his team's success. He was appointed club captain immediately after coming over in a trade with Sporting Kansas City, where he had spent eight solid seasons. Since then, Jewsbury has elegantly shepherded the expansion team through some tough tests.

Even though he got in a spot of trouble with the law before the season, New England's holding midfielder is again playing a crucial part for a mediocre team that badly needs him. Joseph has four goals and is tied for the league lead of game-winning goals with two, sharing the top perch with six other players. Chances are, the rest of the season will offer up even more Joseph heroics because the arrival of playmaker Benny Feilhaber finally takes some of the focus off him.

Of keepers with more than one appearance, Rimando has the lowest goals-against average with .29 per game, the second-highest winning percentage with .57 and the best save rate, with 92 percent of shots faced. What's more, Rimando shares the league lead with five shutouts but needed four fewer starts to get them than FC Dallas' Kevin Hartman did. He has conceded just two goals in seven games, half the total of the next starting keeper, Portland's Troy Perkins, who gave up four in five starts. Oh, and Rimando has let in just two of the 24 shots he's had to handle, also a league-best, of course. 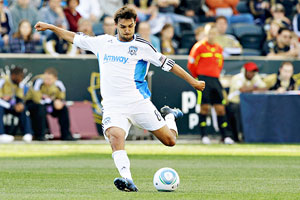 After Wondolowski earned a well-deserved raise from $48,000 a year to $175,000 on the back of his league-leading and rather cost-effective 18 goals in 2010, there was nothing left to do but prove that he wasn't a one-season wonder. So far, he's looked even sharper this year, ever the clinical finisher. Good thing for the Quakes, too, because the scoring load is once again entirely on Wondo, whose five goals make up almost half his piddling team's 12. Sound familiar? Last year he scored 18 of his team's 34 league goals. Before Saturday's 2-1 win over New England, the last time the Earthquakes had won a game in which Wondolowski didn't score was Sept. 5, 2010. His supporting cast is still terrible, reigniting an old debate over whether a player's team has to be winning for him to be the most valuable of his peers.