WEMBLEY, England -- The debate is over now. Barcelona is on the list of soccer's all-time greatest teams.

Led by another dominant performance from Lionel Messi, the Catalan club beat Manchester United 3-1 on Saturday to earn its third Champions League title in six seasons and No. 4 overall.

"I feel privileged," Barcelona coach Pep Guardiola said. "You always want to win, but the way we have won is what I am most proud of. This is the way we want to play football.

How exactly did Barcelona undress Manchester United so badly? Leander Schaerlaeckens breaks down the who and the how of Barca's victory. Story

In the end, there was nothing Manchester United could do. Barcelona was simply too good to be denied Saturday, James Martin writes. Blog

• Blog: Champions final by the numbers

"Lionel is the best player I have seen and probably the best I will ever see."

Messi was typically subdued in his celebration.

"I'm very happy about the match," Messi said. "We were the better team. We deserved to win."

Messi put Barcelona ahead to stay with his 53rd goal and helped create another score to give the Spanish league champion some breathing room.

Barcelona dominated play at Wembley Stadium with its trademark one-touch passing, but it needed the Argentine striker to conjure a 54th-minute solo strike from the edge of the penalty area to take the lead for the second time.

There seemed to be no space as Messi was tracked by fullback Patrice Evra. But the two-time world player of the year spotted a gap between the central defenders and hit a shot down the middle, beating goalkeeper Edwin van der Sar.

Messi added a fake and run that led to David Villa taking possession on the edge of the area. From there, the Spain striker curled a shot into the top corner of the net.

"They do mesmerize you with their passing and we never really did control Messi," United manager Alex Ferguson said. "But many people have said that.

"In my time as manager, it's the best team I've faced."

Soccer commentators had said before the game that Barcelona, which already had won a third straight Spanish league title, would be ranked among the sport's truly great teams with a victory over United. Now, with four European titles, only Liverpool, AC Milan and Barcelona's fierce rival Real Madrid have won more.

With Pedro Rodriguez scoring the opening goal midway through the first half on an imaginative through ball from Xavi Hernandez, the win was as comprehensive as Barcelona's 2-0 victory over United in the 2009 final in Rome. 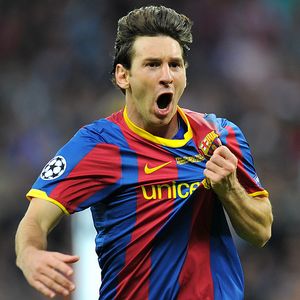 LLUIS GENE/AFP/Getty ImagesLionel Messi was the star of the show as Barcelona dominated Manchester United to win its third Champions League title in six years.

"When Rome finished, I thought we had played a good game, but when I looked at it again I wasn't that impressed," Guardiola said. "But it has served its purpose.

"I think we played much better than the game two years ago."

Wayne Rooney's goal in the 34th minute left it tied at 1 at halftime. Rooney carried the ball to the edge of the area, slipping it to Ryan Giggs. Giggs knocked it back, giving Rooney the perfect opportunity to curl a shot past goalkeeper Victor Valdes at the far post.

Barcelona's performance was so comfortable that Guardiola was able to bring on regular captain Carles Puyol for the last few moments, giving the oft-injured defender the chance to play a part in a memorable triumph.

But in a gesture symbolizing Barcelona's team ethic, Puyol handed the armband over to Eric Abidal. His place on the team had been in doubt after he had surgery this season to remove a liver tumor -- and the France defender lifted the famous trophy.

"Players are human beings," Guardiola said. "Carles has made a great gesture and it has made us stronger."

After a shaky opening, Barcelona simply outclassed the English champions. Xavi, standing in as captain for Puyol, orchestrated play from in front of Sergio Busquets, while Andres Iniesta and Messi hurt United with pinpoint passing.

"This is the reason I came to Barcelona," Villa said. "I'm very happy, very satisfied. We have a team with ambition, a team with the will to win."

United could do little to disrupt Barcelona, the prevailing force of European soccer.

"They were the better team so we can't really argue," United's Rio Ferdinand said. "They're a great side with great players."