FOXBOROUGH, Mass. -- After allowing three goals in a 13-minute span, United States goalkeeper Tim Howard pounded his hands on his thighs in frustration.

And there was still another half to go.

"When you get knocked down, you see what you're made of," Howard said Saturday after World Cup champion Spain overwhelmed the U.S. 4-0 in an exhibition that the Americans used to tune up for the Gold Cup. "I put it behind me. I've been at this a while. When you play the best team in the world, they can make you look silly at times."

In its tuneup to the Gold Cup, a weakened U.S. side suffered a beatdown at the feet of world champion Spain, 4-0. Leander Schaerlaeckens has a report card on each U.S. player's performance. Story

Santi Cazorla scored twice as Spain avenged a loss in the semifinals of the 2009 Confederations Cup, when the Americans won 2-0 to snap top-ranked Spain's 35-match winning streak. Alvaro Negredo and Fernando Torres also scored for Spain, which started just six of the 11 players it began the World Cup final with last July.

It was the most one-sided loss for the Americans since a 5-0 defeat by Mexico in the 2009 Gold Cup final.

"We choose always to take these kinds of challenges, play these kinds of teams, because we feel it's the best way to improve," U.S. coach Bob Bradley said. "Look, when you challenge yourselves against the best teams, you have to accept that this is the way it's going to be sometimes."

The United States was missing Landon Donovan, who was back at the hotel with an undisclosed illness. Bradley said Donovan was feeling weak, but that he is expected to be ready for Tuesday's Gold Cup opener against Canada in Detroit.

"I think we dominated, but we are also aware that they had important players who did not play," Spain coach Vicente del Bosque said.

The international goals were the third and fourth for Cazorla in his career. He had not scored for Spain since a September 2009 World Cup qualifier against Estonia.

Spain was without Carles Puyol, who was recovering from knee surgery, and Xavi Hernandez is resting after a grueling season for Barcelona. Iker Casillas, Andres Iniesta and Pedro Rodriguez were on the bench for the start. 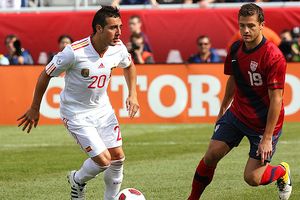 Seven of Spain's starters were from Barcelona and Real Madrid, which played each other in four intense matches over 18 days. Barcelona won the home-and-home to advance to the Champions League final, Madrid won the Copa del Rey, and the teams drew in the league match.

The crowd of 64,121 was the largest to watch a U.S. soccer game in New England, though just a bit short of a sellout. Many were red-clad supporters of Spain, and those there to see the Americans lost their enthusiasm quickly once Spain got started.

The most spirit they could muster was a "Let's Go, Bruins!" chant in support of the NHL team scheduled to play the Vancouver Canucks in Game 2 of the Stanley Cup finals later Saturday night.

Spain dominated the game, taking 20 shots to six for the U.S. After one goal was waved off for offside, Negredo hit the crossbar in the 13th minute. Spain finally scored in the 28th when David Silva worked the ball in and sent it across to Cazorla, who put it into the upper corner of the net to the goalkeeper's right.

In the 32nd minute, Xabi Alonso popped one from behind midfield to Negredo as he outran the defense, collected it outside the box and left-footed it into the net.

"We got our butts kicked," Howard said afterward, adding with a smile. "If we win the Gold Cup in a couple of weeks, nobody will remember this."

Torres made it 4-0 in the 73rd, knocking it off one goalpost, then the other before it trickled over the line. It was the 27th international goal for "El Nino," but just his second for club or country since joining Chelsea on Jan. 31 for a British record transfer fee of $80 million.