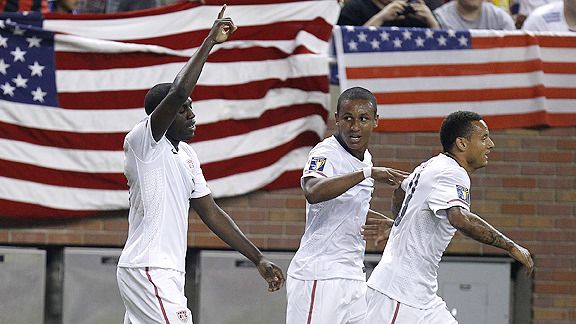 Gregory Shamus/Getty ImagesThe Americans put the Spain debacle behind them with an impressive 2-0 win over Canada in their opening match of the Gold Cup.

DETROIT -- We were all in dire need of a reminder that the U.S. can still dominate the continent. And on Tuesday night against Canada, we got one.

In the first half, the U.S. was everything it hadn't been against Spain: aggressive, organized, sharp and composed. It sought out possession, moved well and applied high pressure when it lost the ball. Of course, the U.S. was also helped by the (ahem) difference in the quality of the opponent, as well as having its regulars available for an entire match. But the victory also showed a confidence that was completely missing against Spain. That manifested itself in a calmness on the ball that was lacking this past Saturday in Foxborough.

The U.S.'s distribution was clean, and the early pressure it applied led to a series of corners. Although it probably resorted to the long ball a little too often, given how plainly dominant Bob Bradley's men were, it was from one such ball that the opening goal emerged. Landon Donovan played an accurate ball into the box to Jozy Altidore, who trapped it, turned, gave it a good thump and saw it slip under Lars Hirschfeld, who didn't cover himself in glory on the play.

Even considering the opponent, the play was much improved. And that was largely down to Michael Bradley and Jermaine Jones in the middle of the park. They dropped back as far as necessary to ensure the safe passage of the ball through to the other side of the field. This also allowed for the U.S.'s wing backs to slide up and create problems for Canada on the flanks. The pressure Bradley and Jones exerted also kept Canada from getting into a rhythm in midfield for the bulk of the first half, forcing errors and taking the pressure off the U.S.'s defenders almost entirely. In all, the U.S. really conceded only one chance in the first half, when Dwayne De Rosario secured a rare pocket of space outside of the box and curled a shot just wide with his preferred right boot.

But the U.S. took its foot off the gas and failed to put the game away in the first half. And that almost came back to haunt it in the second, when Canada came roaring out of the locker room, putting the Americans on the back foot by approaching the game much the way the U.S. had in the first half -- with vigor, quick passing and savvy runs.

Canada, however, failed to turn its lone spell of dominance into more than a handful of forgettable chances. And by the time Altidore prodded deep into the box in the 62nd minute and earned an assist when Clint Dempsey slipped with the ball, Canada's fate was sealed.

In the end, the U.S. earned a much-needed win, which was a good start to the tournament -- one that left room for improvement.

Tim Howard, GK, 7: Clean sheets have been rare for the U.S. in recent months, and Howard had little to do to pull off this one, except for a series of heroic saves in the 85th minute, drawing extended name-chanting from the faithful.

Steve Cherundolo, D, 6: The tiny right back had a relatively calm night, allowing him to push forward often and well. Once there, however, his crossing was off too much of the time.

Tim Ream, D, 6.5: The young center back again acquitted himself well on the big stage, sniffing out attacks and showing his now-trademark composure on the ball. He was dominant in the air, but twice got badly beaten by his man.

Clarence Goodson, D, 7: Goodson made you wonder why he doesn't get to play more often. He was strong positionally, showing he reads the game very well, and was a threat in the air on offense.

Carlos Bocanegra, D, 6: Bocanegra was solid in the back, but he could have pushed forward more to take advantage of the space Dempsey often vacated.

Clint Dempsey, M, 7.5: Dempsey was on his game, drifting to create space and dribbling into free real estate. He combined well with his teammates, eventually sliding in Altidore's cross for the game's second goal.

Michael Bradley, M, 8: Bradley sprayed more long balls around than usual, but his accuracy was impressive. He distributed the ball well and got forward when he could. When Bradley plays like this, the U.S. is a much better team.

Jermaine Jones, M, 7,5: Jones can fly under the radar, but that doesn't make him any less useful. He sat back while Bradley pushed forward and sealed off the defense expertly.

Landon Donovan, M, 7.5: Donovan was very dangerous early on but seemed to lose his edge as the game went on. That may have had to do with the illness he suffered from earlier in the week, but nevertheless it didn't stop him from setting up both goals on nice long balls.

Jozy Altidore, F, 7.5: The much-criticized Altidore had a banner game. He put the U.S. ahead by booting the ball hard and low past Hirschfeld and earned the assist on Dempsey's shot.

Juan Agudelo, F, 6.5: Agudelo was useful, dangerous and lively on the night, working hard, pressing well and instinctively sensing when to trade places with Dempsey or Altidore. He got off three good shots in the first half and came very close to sliding in the ball that eventually rolled to Dempsey for the second goal. A nice progression from the 18-year-old.

Chris Wondolowski, F, 6: By the time Wondo made it into the game in the 63rd minute, the U.S. had done most of its attacking. He had a shout for a penalty and a chance to make it 3-0 for the U.S.

Maurice Edu, M, 6: Edu had a steady 13 minutes of work, helping to bail out the U.S. when it got itself into trouble in the back in the late going.