TAMPA, Fla. -- A slow start doomed the United States against Panama, slowing the Americans' usual march to the quarterfinals of the Gold Cup.

Instead, the surprising Panamanians guaranteed themselves a spot in the next round of the tournament with a 2-1 victory over the favored U.S. on Saturday night.

"Sometimes you just come out flat for whatever reason. At this level, and against a good team, you can't do that," U.S. star Landon Donovan said, reflecting on the Americans falling behind by two goals in the opening half. "Some nights you come out flat and you don't get punished, but other nights you do. We learned a valuable lesson."

After losing 4-0 to Spain last week and being deservedly beat 2-1 by Panama, it's difficult to imagine how much lower the U.S. can sink, writes Jeff Carlisle. Report card

Luis Tejada scored in the 19th minute and Gabriel Gomez converted a penalty kick later in the first half for Panama, which won for the first time in nine meetings with the Americans, who had never lost a match in the group stage of any Gold Cup.

"First of all, give Panama a lot of credit. They started the game well. They put us on our heels at times," Donovan said. "It took us a while to get into the game. Our second half was very good, but when you dig yourself a hole that huge, sometimes you can't get out."

Despite the loss, the U.S. can clinch a spot in the quarterfinals of the tournament that determines the champion for North and Central America and the Caribbean by beating Guadaloupe in its final Group C stage match Tuesday night in Kansas City.

Tejada finished a sequence that began with Nelson Barahona's free kick, tapping in a rebound after U.S. goalkeeper Tim Howard lunged to get on a hand on Armando Cooper's header from left of the net. American Tim Ream's foul set up Gomez's penalty kick, which the Panamanian lifted over the diving Howard for a 2-0 lead in the 36th minute.

Clarence Goodson gave the U.S. hope for a dramatic comeback, scoring in the 68th minute. The Americans had a couple of opportunities pull even, but Chris Wondolowski missed a wide-open net in the 80th minute and Jaime Penedo made two of his six saves in injury time to help Panama hang on before a crowd of 27,731.

"In the first half as the game was developing, we had the ball a lot but we weren't able to take advantage of some situations," U.S. coach Bob Bradley said. 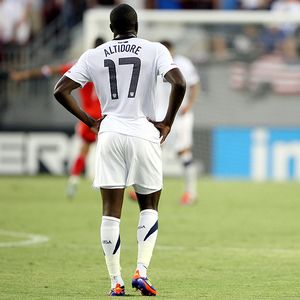 "What you don't want to do in that situation is go down a goal. You just want to keep doing a good job controlling the ball, controlling the game with the idea that opportunities will come. You put yourself behind, you make it much more difficult."

The loss was just the second for the Americans in their past 21 Gold Cup games. They had been 6-0-2 against Panama, with all the meetings coming in Gold Cup or World Cup qualifying.

Despite defeating Panama in the past three Gold Cups, the Americans stressed they could not overlook the Panamanians because each of those games had been close.

The teams played to a scoreless draw in the 2005 final, with the U.S. winning a penalty shootout to take the championship. They met in the quarterfinals in 2007 and 2009, with Panama losing 2-1 each time.

Panama coach Julio Dely Valdes said through a translator that the victory was especially gratifying because of the effort that went into finally getting over the hump against the Americans.

"We worked very hard for it," the coach said. "I'm absolutely happy because we made history."

The U.S. began the tourney with a 2-0 win over Canada, but wasn't near as sharp in falling behind the aggressive Panamanians, who used their quickness and athletic ability to create numerous opportunities.

Panama opened with a 3-2 victory over Guadeloupe and beating the Americans gave it consecutive Gold Cup wins for the first time.

Donovan said it was just a matter of time before a team as talented as Panama had some success against the U.S.

"CONCACAF teams are getting better and better. It's a pretty good team we played against," Donovan said. "It's disappointing, but the reality is it's over now. ... We've got to win Tuesday, see what else happens and see where we end up. We're still fine."

Game notes
There were 35 fouls -- 18 on the U.S., 17 on Panama. ... The U.S. is 24-1-2 all-time in Gold Cup group play. ... Panama improved to 1-3-1 against the Americans in Gold Cup. ... Freddy Adu was among five players who were not active for the U.S. The midfielder also was inactive for the tournament opener against Canada. ... Canada won the first game of the doubleheader at Raymond James Stadium, defeating Guadeloupe 1-0. The Canadians face Panama in Kansas City on Tuesday.