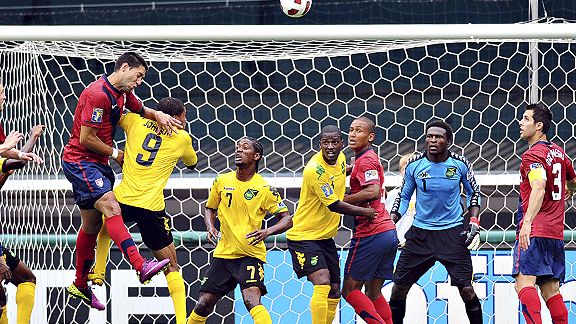 Evan Habeeb/US PresswireHeads up: The U.S. dominated Jamaica and now heads into the Gold Cup semifinals with some much-needed momentum.

WASHINGTON, D.C. -- Responding to the criticism of the team and the immense pressure on its embattled coach, Bob Bradley, the U.S. soundly outplayed Jamaica on Sunday afternoon, winning 2-0 to advance to the semifinals of the 2011 CONCACAF Gold Cup.

Jamaica had been one of the tournament's hottest teams coming into the match, and many thought that the Reggae Boyz's considerable speed out of their 3-5-2 formation would overrun the U.S. on the break and perhaps even pull the upset over the Americans.

But no such scenes unfolded in muggy Washington.

In the first half, the U.S. set up in the 4-5-1 that probably always suited its manpower better and got good results from it. Even if Landon Donovan started the match on the bench -- this probably had to do with his leaving the team for four days to attend his sister's wedding and not returning until 7 a.m. on the day of the match -- the U.S. was vibrant and dangerous. In a game where Jamaica was expected to dominate with its speed and marauding wing backs, it was the U.S. that held the flanks, keeping Jamaica's backs home. Alejandro Bedoya was active on the right, occupying several men by cutting inside while Clint Dempsey drifted to the center to make room for left back Eric Lichaj.

With this approach, the U.S. was able to set up high and exploit the gap behind Jamaica's very advanced midfield. This put considerable pressure on Jamaica's back line and yielded a slew of chances for the U.S.

The Yanks also avoided the dreaded early conceded goal, even if it came close in the fourth minute when Michael Bradley got his pocket picked by Dane Richards, who tore off with the ball to create two good chances for Jamaica, both of which it failed to capitalize on. What's more, the U.S. managed to hold the ball fairly well, gobbling up long spells of possession and avoiding the sort of turnovers that would play into Jamaica's strength of staging lightning-quick counters. Only in the 38th minute did this happen, when Dane Richards snuck off on the left and eventually put his finish right at Tim Howard.

Yet in spite of the U.S.'s dominance in the first half, it failed to put the game away early. A combination of factors -- splendid goalkeeping by Donovan Ricketts, decent defending by the Jamaican defense and subpar finishing by the U.S. -- kept the game scoreless in the first 45 minutes.

The Americans didn't create as many chances in the second half, but they got the business done by scoring twice. The first came when Jermaine Jones' shot from outside the box took a wicked deflection off a defender before landing in the back of the net in the 49th minute.

After that, Jamaica was clearly deflated and could muster little more than running interference between American passes. Although Jamaica pulled back its midfield, the U.S. got a little more comfortable on the ball as it was being pressed less, with the Reggae Boyz now overtly playing for the counter. This made for a much more low-key finish to the game. At least until Jermaine Jones' thespian flop in the 68th minute. After he lost any hope of chasing down a through ball and decided the best remaining option was to go to ground, he got Jermaine Taylor sent off. This gave the U.S. room to attack at will.

The Americans put the game to bed in the 79th minute when Donovan, who had bailed out of a promising run on goal moments earlier, played a nice ball wide to Juan Agudelo. He, in turn, played the ball square to the wide-open Dempsey, who made up for his lackluster finishing against Guadeloupe with a cool-as-you-like goal.

This was the U.S.'s best game of the summer by some distance. Next up is the semifinals in Houston, with the potential final against archrival Mexico looming.

GK, Tim Howard, 7: Had little to do but as usual made some nice saves when called into duty.

D, Steve Cherundolo, 6.5: It was a relatively slow day at the office for the right back. Although he couldn't get forward as much because of Bedoya's inclination to set up wide, the two combined well.

D, Clarence Goodson, 6: Solid in the air as always. But he was guilty of a few poor touches on miscommunications with Howard (who did take the blame for one of the mishaps).

D, Carlos Bocanegra, 6.5: A calm and collected game from the center back, who will breathe a sigh of relief that Jamaica failed to use its speed to pressure the U.S.'s back four.

D, Eric Lichaj, 7: The U.S. may have found its left back at last. Lichaj pushed forward very well, although he should have finished a fat chance in the 44th minute. He can also get caught out upfield when he's a bit too aggressive, an element of his game that will bear watching.

M, Alejandro Bedoya, 7.5: The winger, who (unthinkably) was not on the original tournament roster, was lively, dangerous and did a lot of the dirty work before coming off for Donovan.

M, Michael Bradley, 6.5: Bradley wasn't clean in his distribution early on, but improved as the game went on. He covered acres of territory and was useful in helping out the defense. But he did get his pocket picked a few times when he'd stay on the ball too long.

M, Jermaine Jones, 8.5: Jones, easily the best man on U.S.'s side, distributed the ball expertly, closed a lot of gaps in the back and scored the game winner. He even got his man sent off on an unsightly flop before coming off in the 74th minute.

M, Sacha Kljestan, 7: He proved a nice addition to the attack, playing behind a lone striker. He made surging runs up the field, connected the attack with the two holding midfielders and was occasionally dangerous himself.

M, Clint Dempsey, 7.5: Deuce spent another game drifting around in desperate search of a goal. It took a handful of good chances before he finally rounded the goalkeeper and stuck away the 2-0 in the 79th minute.

F, Jozy Altidore, Incomplete: Was subbed off in the 11th minute after injuring his hamstring.

F, Juan Agudelo, 6.5: Came on in emergency relief for Altidore. Agudelo was useful, working hard and closing down well even if his hold-up play needs work. He provided some danger, too, and provided Dempsey with his goal.

M, Landon Donovan, 6.5: He didn't look sharp after coming on, but he also set up Agudelo for Dempsey's goal, redeeming his day.

M, Maurice Edu, 6.5: In a spell of work toward the end of the game, Edu played well, distributing well and taking some of the workload off of exhausted teammates.