HOUSTON -- Clint Dempsey struck again, and the United States is back in the Gold Cup final for the fourth straight time.

Dempsey scored in the 77th minute off an assist from Landon Donovan, and the Americans earned a 1-0 victory over Panama in the semifinals Wednesday night, avenging a stunning loss in group play.

The U.S. will meet Mexico for the championship match on Saturday at the Rose Bowl. Mexico beat Honduras 2-0 after extra time later Wednesday.

The U.S. defeated Panama 1-0 in a gritty semifinal to reach the Gold Cup final Saturday in Pasadena, Calif. Jeff Carlisle hands out the grades for every U.S. player. Story

The United States has shut out its last three opponents since the 2-1 loss to Panama on June 11. The U.S. had never lost in the group stage of the tournament, or to Panama in international play until the shocking defeat.

Dempsey, who also scored in the Americans' 2-0 win over Jamaica in the quarterfinals, said the team proved its resolve in the hard-fought rematch with Panama.

"I think we showed our quality in being able to grind out a result," Dempsey said, "even though it wasn't our best game."

Freddy Adu made a long-awaited return to American soccer in the second half, and set up the winning play with a long, slanting pass to Donovan, who played in his 27th consecutive Gold Cup match to extend his own record.

Donovan was benched at the start for the second straight game, and joined the action in the second half. He tracked down Adu's cross, then threaded a pinpoint pass through the Panama defense to Dempsey, who slid as he redirected the ball into the low corner of the net.

"It was a great ball from Freddy to open up Landon," Dempsey said. "All I had to do was put my foot on it."

"It was a very intense game, very few chances for both teams," Dely Valdes said. "I'm pleased with my team's performance, they fought until the very end." 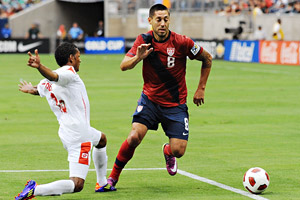 Don Emmert/AFP/Getty ImagesClint Dempsey scored the only goal of the United States' Gold Cup semifinal against Panama in the 77th minute.

Both teams were missing top players in the semifinal.

Panama forward Blas Perez earned a red card in his team's quarterfinal win over El Salvador, and U.S. forward Jozy Altidore was ruled out for the rest of the tournament with a strained hamstring.

Altidore had scored two of the Americans' six goals in the event. He was hurt in the ninth minute of the 2-0 victory against Jamaica on Sunday.

The Americans generated the first scoring chance in the 17th minute. Alejandro Bedoya hooked a high cross into the goal area. Dempsey redirected a header toward the goal, but Panama goalkeeper Jaime Penedo corraled it before Juan Agudelo could finish.

Agudelo hit the post with a diving header off a cross from Steve Cherundolo in the 25th minute. The near-miss incited swelling chants of "USA! USA!" from the partisan crowd.

The Americans controlled possession in the opening minutes after the break, but still had trouble creating good scoring chances. Eric Lichaj sent a cross in front of the Panama net, but it was too high for any of his teammates to reach and bounced out of bounds.

Adu, the one-time teen phenom who turned 22 last month, drew cheers when he trotted onto the field in the 66th minute. Adu was playing in Turkey when he got the call to rejoin the Americans' roster for the Gold Cup.

Adu struggled early in training camp for the tournament, but Coach Bob Bradley said he steadily regained his form with each practice.

"From the start of this camp, Freddy's made progress," Bradley said. "The opportunity (Wednesday) was earned on his part. You could see him getting sharper, his confidence coming back. He was a nice part of the play that led to the goal. It's important for him, he earned this opportunity and I think everybody on this team feels good about that."

Panama nearly took the lead in the 71st minute, when Armando Cooper fired a left-footed shot that U.S. goalkeeper Tim Howard leaped to deflect with his left hand.

Dely Valdes was encouraged that his team played the Americans so evenly.

"The gap between the great teams and the up-and-comers has shrunk significantly," he said. "Panama showed a very competitive level."

The Americans finally broke through six minutes later. Dempsey and Donovan embraced as red, white and blue streamers floated onto the field and the crowd roared.

The United States is unbeaten in 22 of its last 24 games in the Gold Cup, a tournament with 12 teams from Central and North American and the Caribbean. The Americans improved to 7-1-2 against Panama all-time.