Another chapter in a heated rivalry 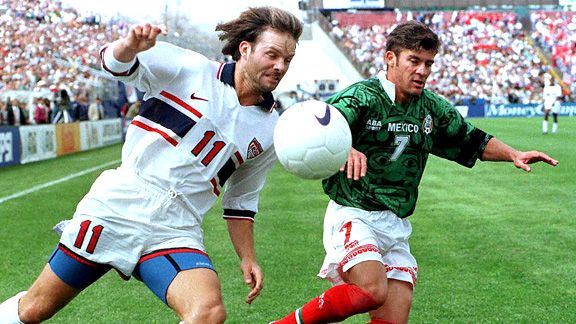 John Mottern/Getty ImagesEric Wynalda drives past Ramon Ramirez during a 1997 World Cup qualifier. It's one of many reminders of the intensity of the U.S.-Mexico rivalry as we anticipate Saturday's Gold Cup final.

There are finals. And then there are Finals.

But mere capitalization doesn't suffice in capturing the anticipation of Saturday's much hoped-for U.S.-Mexico final -- sorry, Final -- of the 2011 CONCACAF Gold Cup in Pasadena, Calif. (9 p.m. ET, Fox Soccer). This game won't just anoint a champion of all North and Central America and the Caribbean and send the winner to the 2013 Confederations Cup (the greatest head start for the World Cup out there). It will also write the latest chapter in one of the fiercest rivalries in the world's game.

Ever since the U.S. and Mexico first faced each other in Italy in 1934 in a one-game playoff for a spot in the upcoming World Cup -- the unfancied Americans pulled a 4-2 upset over their southern neighbors -- these matchups have been acrimonious affairs. Mexico considers it its birthright to be better at soccer than the U.S. The U.S., meanwhile, sees beating Mexico as validation of its growth and status within CONCACAF. Needless to say, the games often get testy from the senior national teams all the way down to the youth teams. In 57 senior games since Mexico's debacle in Italy, El Tri has corrected the aberration of that day, winning 32 times, losing just 14 and tying 11 more. But the game that mattered most, a second-round contest during the 2002 World Cup, went to the U.S. 2-0 -- another humiliation that Mexicans could ill abide.

Between wins in the U.S. Cup final in 1999 and the Gold Cup final in 2009 against a team of mostly U.S. prospects, Mexico failed to win in 11 consecutive games on American soil, losing nine times. The U.S. is winless in 24 games in Mexico, getting just a draw in a World Cup qualifier in 1997. But this is largely inconsequential, because Saturday's final will be played at the Rose Bowl. In their past 10 meetings dating to 2003, the U.S. has won five times, Mexico three, with two draws between them. 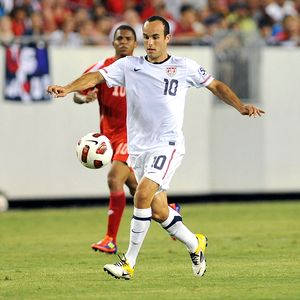 Al Messerschmidt/Getty ImagesWill Landon Donovan start the final against Mexico, or will he again play the role of the supersub?

Despite the U.S.'s positive home record (13-7-9) against Mexico and having been the better team recently, it is probably the underdog for Saturday's matchup.

Mexico is a strong team with both experience and youth that showed well at last year's World Cup. It possesses far more weaponry than the U.S. does. And the squad is so deep it could afford to lose five players, including star goalkeeper Guillermo Ochoa, to suspension after testing positive for clenbuterol without missing a beat on the field.

Mexico's speedy attack features smooth exchanges by a well-rounded, technical team that likes to strike through the middle or down the flanks. Possible issues for the U.S. could be Andres Guardado's speed up and down the left wing (provided that the ankle knock that made him hobble off against Honduras isn't serious), the drifting of playmaker Giovanni dos Santos, Pablo Barrera's distribution, Rafa Marquez's long ball and supersub Aldo de Nigris' aerial threats on set plays.

"I think with the entire Mexican team it's important that we defend with numbers, that we bottle them up and get people around the ball," U.S. goalkeeper Tim Howard said. Crucial, too, will be to bring the sort of physicality Honduras offered up against Mexico in the semifinals, which can upset El Tri's technically proficient passing game.

But while the U.S. squad is keenly aware of Mexico's ample ability, it hastens to add that it isn't so bad itself.

"Mexico is obviously a very gifted team on the ball and they've scored some goals, so at the offensive end they're very good," right back Steve Cherundolo said. "But I think we're dangerous in our own right. We're very quick on the counter and defend very well as a unit and that's maybe something that Mexico hasn't seen yet."

The U.S.'s undisputed star, Landon Donovan, is likely to return to the starting lineup after having been surprisingly benched the past two games. While the first benching was on account of having returned from a wedding the morning of the game, the second was because the team had found a good rhythm without Donovan.

Donovan, for one, had no issues with the decision. "[I was not] surprised at all," he said. "[U.S. coach Bob Bradley] and I spoke about it all week. Throughout the years we've always been very open and honest with our communication, so there's nothing left to the imagination. We spoke about it and we agreed that the team played very well the other night. I've certainly been the beneficiary of [a situation in which] the team plays well, you stay in the team. It's been that way my whole career. It would be hypocritical to think otherwise."

Nevertheless, one of Donovan's replacements in the 4-5-1 the U.S. has been employing, Sacha Kljestan, faltered against Panama. So look for Donovan to reclaim a spot, either on the left wing or behind a lone striker, while the emerging Alejandro Bedoya remains posted in Donovan's old wide-right position. -- LS

"They're a good team," midfielder Michael Bradley said. "Certainly the attacking players, they are mobile and can cause problems with their skill. Having said that, it's a big rivalry and these games, all it takes is one play going one way to tilt the bar in your favor."

For that bar to tilt just so, however, the U.S. faces a considerable problem. Aside from the aforementioned threats, there's also Mexico's Javier "Chicharito" Hernandez. The Manchester United forward, coming off a first season in Europe in which he set the continent ablaze, is threatening to become the best striker CONCACAF has ever produced. "They've got perhaps the hottest striker in the world on their team," Donovan said.

"Javier is a wonderful player," Howard said. "He's got a lot of energy, got a nose for the goal. It'll be difficult."

The U.S. will have to find a remedy for the quick poacher, who can turn up anywhere and turn a quarter-chance into a score. Between the U.S.'s slow central defense and already overworked holding midfielders, the Americans will have to find a solution or risk allowing Hernandez to add to his tally of seven goals -- already tied for the second-most in a single tournament.

Of consolation to the U.S. is that Mexico's momentum has gotten ensnared in difficult wins over Guatemala in the quarterfinals, when it needed to come from behind, and Honduras in the semifinals, when it took two extra-time goals to advance. The U.S. had considerably less trouble getting past Jamaica (2-0) and Panama (1-0) and was firmly in command of both games. This is a turnabout from the group stage, when Mexico romped through with a 14-1 goal differential and the U.S. needed to grind out a 1-0 win over tiny Guadeloupe to survive. But the U.S., with three shutouts in a row, now seems to have the better short-term form.

"We're playing a lot better," Donovan said. "Sometimes it's good to get a wakeup call. We've said all along that this tournament is a marathon and you can't get too caught in one result. You've got to keep getting better as the tournament goes on."

But each team's track record in this tournament will fall by the wayside when the starting whistle blows. All that will matter then is what happens within the span of 90 minutes (and then, perhaps, extra time and a penalty shootout). "A final is a final," concluded a philosophical Michael Bradley.

Except when it's a Final.