BUENOS AIRES, Argentina -- Historic soccer team River Plate was relegated to the Argentine second division for the first time in its 110-year existence Sunday, sparking riots between police and fans with dozens injured inside and outside Monumental Stadium.

The relegation came after a 1-1 draw with Belgrano in the second leg -- Belgrano won the first 2-0 -- of a demotion playoff. Mariano Pavone scored in the sixth minute for River, and Guillermo Farre tied it in 62nd.

Violence broke a minute before the match was over. Angry fans pelted players with objects from the stands, and police replied with high-powered fire hoses with some fans climbing fences topped with razor wire. 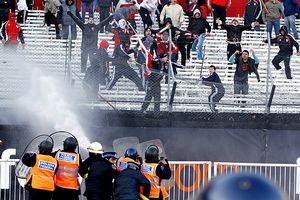 AP Photo/Ricardo MazalanPolice spray water at River Plate fans to keep them from jumping over the gate onto the field at the end of Sunday's match. River Plate was relegated to the Argentine second division for the first time.

As fans were pounded with jets of water, River Plate's players huddled on the pitch, many in tears, including goalkeeper Juan Pablo Carrizo.

Nilda Garre, the minister for security, said Sunday that 35 police officers were injured.

"Fortunately, none have their lives at risk," the Argentine news agency DyN reported her saying.

Police used water cannons outside the stadium immediately after the match, hoping to disperse fans quickly. Fans who poured out of the stadium faced police with batons and shields at every exit, while attack dogs were ready and helicopters hovered over the stadium.

The incident has threatened the upcoming Copa America and the future of the team's president.

A prosecutor has ordered the stadium closed until the turnstiles can be inspected. There are suggestions the seating capacity was exceeded by 12,000. The stadium also serves as Argentina's national stadium and is set to hold the Copa America final July 24.

Some had said the match should have been played in an empty stadium. Anibal Fernandez, head of the Argentine government cabinet and senior assistant to President Cristina Fernandez, said Monday there was "no reason" to play without fans.

"These are not River fans, these are 300 vandals," Fernandez told Telefe television. "They need to be identified, detained and never allowed back into the stadium."

Prosecutor Gustavo Galante suggested the closure could last for a month, but also hinted it might take only a week to gather evidence.

"The stadium will remain closed until this is completed and all the evidence is in hand," Galante told The Associated Press.

CONMEBOL, the governing body of South American soccer, insisted the match will go on.

Ernesto Cherquis Bialo, a spokesman for the Copa America and the Argentine Football Association, said it was too early to know if the final would be moved. He also said AFA's executive committee would meet Thursday and decide on sanctions against River Plate.

The area outside the stadium, located in the leafy northern suburb of Nunez, looked like a war zone with police battling hand to hand with River Plate hooligans, who are known by the colorful nickname "Los Borrachos del Tablon" -- the Drunks in the Stands.

Young, angry fans responded by throwing rocks at police, setting fire to rubbish bins and vehicles, and ripping down metal street barriers. Smoke also billowed from one end of the stadium with reports that concession areas and other parts of the stadium had been set on fire.

Fans also ripped up stadium seats and used them as weapons in fights.

A half-dozen ambulances entered the stadium area about 45 minutes after the match ended, with live television coverage showing medics working on the injured while street fights erupted just a few feet away.

As the troublemakers were driven away from the stadium, there were reports of stores and shops being broken into on one of Buenos Aires' most famous thoroughfares -- Avenida Del Libertador.

Fearing this kind of violence, Argentine authorities deployed about 2,200 police -- reported to be the largest security operation for a soccer match -- to control the crowd.

Suggestions to play the match in an empty stadium were turned down by interior ministry officials after consulting with the Argentine Football Association and its president, Julio Grondona.

The violence was predicted. On Wednesday, the first leg in Corboda was stopped for 20 minutes early in the second half after River Plate hooligans ripped through a fence and raced across the field taunting and pushing River Plate players.

The ugly scenes, seen worldwide, came just days before Argentina hosted the Copa America -- the continental championship for national teams -- with the first match on Friday in La Plata, about 35 miles southeast of Buenos Aires.

River Plate President Daniel Passarella said after the game he would not resign.

"They will take River's presidency away from me over my dead body," he said.

Passarella, the captain of the 1978 Argentina team that won the World Cup, faces huge problems trying to rejuvenate River Plate.

The club has debts estimated at $19 million and is sure to experience a steep drop in revenue in the second division. River Plate received about $7.5 million from TV rights in the past 12 months. In the second division, it will receive about $1 million.

Many of River Plate's top players are sure to leave, joining other stars who have been sold in recent years to European clubs. Sponsors may also seek new contracts at reduced rates. Coach Juan Jose Lopez is expected to quit, replaced by someone with experience in the second division, where play is physical and the fans are intimidating.