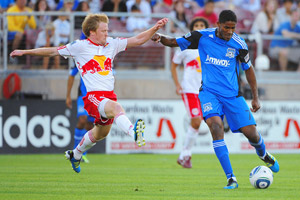 Kyle Terada/US PresswireDax McCarty played his first game for New York this past weekend, but the Red Bulls have other deals in the works.

NEW YORK -- After pulling off the biggest trade of the season on Monday -- sending playmaker Dwayne De Rosario, who had been acquired from Toronto FC less than three months ago, to DC United in exchange for midfield dynamo Dax McCarty -- the New York Red Bulls have several other deals in the works.

Contrary to speculation, that goalkeeper will not be 39-year-old U.S. national team backup Marcus Hahnemann, who has spent the last decade playing in England but whose contract with Wolverhampton recently expired. "No, we have not spoken to Hahnemann," Soler said. "As I understand, he's on his way to Seattle. So I don't think that's an option for us."

New York hopes to sign a goalkeeper from the free agent market. "We have been scanning all over the market to see if there are any options," Soler said. "The player has to be a free transfer and have a salary [demand] we can live with."

New York is also looking to add a field player, and head coach Hans Backe said recently that he wants help for his defense. In 17 games, New York has conceded 21 goals, even while the back line has looked sturdy and consistently featured the configuration of (from right to left) Jan Gunnar Solli, Rafael Marquez, Tim Ream and Roy Miller.

However, acquiring a second player would be more complicated for the club. "I don't know if we can create enough cap [space to sign a second free agent]," Soler said. So any transaction "would have to include someone moving out. It could be that we trade someone for something -- like allocation money. Or it could be another player in the league that we trade one of our players for."

However it is achieved, the moves are imminent. "We're looking short term," said Soler. "I hope in a couple of weeks we can do something. I think within July."

The all-important cap space was helped by the De Rosario trade, but not as much as the figures suggest. The Canadian forward, who has 80 career goals and is in his 11th season in the league, has a guaranteed salary of $493,750 for 2011. McCarty has a deal worth at least $175,000. Nevertheless, some of De Rosario's salary is thought to have been swallowed by Toronto for this year, while New York is allegedly taking some on as well. That means the difference between the two players isn't very big for New York this year. But longterm, McCarty, who is 24 years old to De Rosario's 33, is likely to be cheaper, since De Rosario has been openly angling for a big pay raise.

De-Ro's departure opens up space for the Red Bulls on the field. McCarty is a box-to-box midfielder who operates much deeper than De Rosario does. As a result, Thierry Henry, who told ESPN.com in April that he envisions himself as the team's primary playmaker, can now occupy the space right behind the forwards where De-Ro once roamed.

"It's one of a number of discussions that we had," Soler said. "To be able to get Thierry the ball as much as we can -- and we want him to have the ball very often -- it's easy for him if he can drop down a little bit and play in the position between the midfield and the attack. If he plays all the way up [as an advanced striker], there will be a lot of dueling and people on his back all the time. One consideration is that he is, in my opinion, a great number 10 as well as a great attacker."

Another possibility was that New York had been pursuing McCarty ever since last season, when he helped FC Dallas reach the MLS Cup final. No deal was agreed upon, even if McCarty eventually went to the Portland Timbers for free in the expansion draft before Portland flipped him on to DC United. New York now envisions McCarty forging a strong block with Finnish holding midfielder Teemu Tainio in front of its defense.

"We also think about sitting back now with two defensive midfield players and let Thierry and the other attacker do even more work going forward," said Soler. "We want people who can defend and we think that Teemu and Dax will do that very well."

New York will also be bolstered by the return of several strikers from either injury or Gold Cup duty. "We have with Luke Rodgers coming back, [Juan] Agudelo coming back and with Henry as good as he is -- and [Joel] Lindpere and [Mehdi] Ballouchy and [Austin] Da Luz playing well -- we have more options in the attacking part of the game so we decided it made sense for us to make a move."

Ultimately, the Red Bulls hope to put the finishing touches on a team that will match its ambitions. "I have a five-year plan for this club and our target is every year to be the Eastern Conference champions and every year to be a top-three team in the Supporters' Shield and try to win the Cup," Soler said. "I have no doubt in my mind that we will reach the first two goals [this year] and that we will go further in the MLS Cup than we did last year [when San Jose eliminated New York in the first round]."

That's pretty big talk for a team that hasn't made a habit of winning lately.