TOKYO -- If ever there was one, this was a victory to be savored.

After a year that will go down in history as one of Japan's hardest, a period scarred by the horrors of a deadly earthquake and tsunami and the world's worst nuclear disaster since Chernobyl, the Women's World Cup finally brought the nation something it desperately needed. 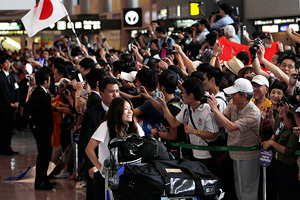 Offering a potent symbol that, despite the odds and the hardships, there is a light at the end of the tunnel, Japan's triumphant women's soccer team returned home Tuesday with the World Cup trophy.

"I never felt this day would come," team captain Homare Sawa said at a news conference, a golden medal around her neck and her Most Valuable Player award displayed in front of her.

Thousands of joyous, flag-waving fans turned out to greet the team as it arrived home, and two fire trucks shot celebratory arches of water over the team's aircraft as it approached the terminal at Tokyo's Narita Airport.

Goalkeeper Ayumi Kaihori was the first to walk through the terminal. The rest of the team, also wearing their gold medals, followed as cameras flashed and fans shouted "omedeto gozaimasu" -- congratulations.

"This is a chance to forget the nuclear disaster and everything else, to just unite and celebrate," said 22-year-old Toru Komatsu.

But the difficulties faced by Japan were never far from the minds of the players.

Before boarding the flight from Germany, Sawa said: "I have to dedicate this win to the people who suffered the disaster."

On March 11, more than 20,000 people were left dead or missing by a massive earthquake and tsunami that devastated much of the country's northeast coast and touched off the worst nuclear disaster since Chernobyl in 1986.

The calamity has thrown the nation's economic recovery into question, forced tens of thousands of people to live in temporary shelters, and made ghost towns of radiation-tainted villages that may never be inhabited again.

Then, seemingly out of nowhere, came Sawa -- who has represented Japan for 18 years -- and her teammates.

As the team progressed, Japan watched with guarded dreams, not wanting to get its hopes up too high so soon. Even as the team made the final, the buildup was cautious -- this was the United States, after all, a two-time World Cup champion. No Asian team had ever won the World Cup.

But Japan, which went in ranked No. 4, did not give up.

"On the field, we always felt the support of the nation behind us," coach Norio Sasaki said. "We wanted to give something back."

For much of this Women's World Cup, destiny seemed to be the United States' companion. Sunday it proved fickle, as Japan -- a team riding its own wave of emotion -- claimed its first-ever title, and the U.S. was left to rue its many chances, writes Jeff Carlisle. Report Card

"We were lucky during the penalty shootout, but my soccer god made it possible for us to win against the U.S. for the first time," said Japan's coach Norio Sasaki. Ravi Ubha analyzes what turned out to be an instant classic. Story

The U.S. loss will sting, but the 2011 Cup should be remembered as the coming-out party for elegant, creative soccer in the women's game. In almost every way, it has been a magical tournament, writes David Hirshey. Story

Down once, then twice, the Japanese came back. In the penalty shootout following a 2-2 draw, Kaihori seemed unable to fail -- though she missed with her hands, she blocked a key shot away with her right shin.

When the whistle blew, Japan realized it could -- finally -- start cheering.

After the shootout victory, which came at just about dawn Monday Japan time, chanting fans spilled into the streets. Police kept a small group of revelers from wandering into traffic in Shibuya, a neighborhood known for its youth pop culture.

Prime minister Naoto Kan hailed the victory as the "greatest gift" to the nation.

"I think they brought courage to the whole nation," Kan said, noting a banner the team carried before the final: "To our Friends Around the World -- Thank You for Your Support."

"As the prime minister, and as one Japanese citizen, I express my heartfelt gratitude," Kan said before greeting the team Tuesday.

The women's team goes by the name "Nadeshiko," a pink mountain flower that symbolizes beauty and strength.

Several members of the national squad were directly affected by the disaster -- the power utility that runs the crippled nuclear plant sponsored a professional team. At least one of the World Cup team players worked at the plant itself before the disaster.

Defender Azusa Iwashimizu, who was given a red card and ejected for a tackle at the end of overtime, held up a flag with a handwritten message to "Everyone in Tohoku" during the post-victory celebration.

In the message, Iwashimizu said "I have never forgotten you" and promised to take her medal to Tohoku -- in the devastated northeast -- and meet people there. She also thanked the region for cheering for the team.

"As a native of Tohoku, I wanted to bring back some good news," she said.

Having done so, the team is now talking brightly about the future -- another breath of fresh air in a country where it is still hard to see beyond the March 11 tragedy.

"Once people get a taste of success, they want more," Sawa said at the news conference, surrounded by her teammates. "I've never won an Olympic gold. That's our next goal."