Luis Suarez also scored for Uruguay, which followed up a semifinal appearance at the 2010 World Cup by winning South America's championship for the first time since 1995.

"We played as a group," said Suarez, who was selected as the best player of the tournament. "I think when groups are united like this, everyone together and going for the same thing, you can get things done."

Time to Change Up the Copa?

Uruguay's win over Paraguay in the title match ended a disappointing Copa America, a tournament that can do with some format changes, writes Leander Schaerlaeckens. Blog

At roughly 3.5 million people -- about the population of Connecticut -- Uruguay has the lowest population of teams in the tournament.

Argentina and Brazil were upset in the quarterfinals of the Copa. Uruguay ousted Argentina on penalties and Paraguay eliminated Brazil, also in a shootout.

Argentina has won the title 14 times, Brazil eight. Brazil had won four of the past five titles.

Uruguay was the clear favorite going into the final, wrapping up a tournament filled with surprises.

Not only had Brazil and Argentina been sent home early, but Venezuela reached the third-place match on Saturday before losing 4-1 to Peru. Those two countries have been the weakest in the region in recent years, but they suddenly look formidable going into regional World Cup qualifying later this year.

Uruguay's squad featured 20 of the 23 players it took to the World Cup a year ago, showing teamwork and unselfish play with none of the vast star power of Argentina or Brazil.

"The important thing was getting started well," said Suarez, who had four goals -- one fewer than Peru's Paolo Guerrero. "With two goals in the first half, I think it was very difficult for them to come back."

Suarez gave Uruguay the lead in a match it dominated in the opening minutes. Receiving a pass in the area, the Liverpool forward beat defender Dario Veron to score from a deflected left-footed shot that went in off the far post behind goalkeeper Justo Villar.

Uruguay could have even have led in the second minute, when Villar stopped Diego Lugano's point-blank header. 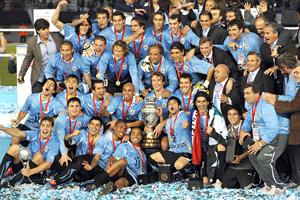 Juan Mabromata/Getty ImagesUruguay celebrates with the trophy after winning 3-0 in the Copa America final Sunday.

Forlan, who was voted the best player at last year's World Cup, made it 2-0 by lashing a left-footed shot from 12 yards that left Villar flat-footed. He was set up after teammate Egidio Arevalo Rios had stolen the ball from a Paraguay player near midfield.

The Atletico Madrid striker had not scored in his 12 previous matches for the national team.

Sebastian Eguren almost made it 3-0 in the 74th, foiled when Villar stuck out his left arm with the ball headed for the net.

Forlan scored the final goal in the 90th, taking a pass from Suarez and scoring into the far corner.

"This has been a lot of work, going back many years," Forlan said. "It's been a job of doing things well and it's yielded results."

Paraguay, which seldom threatened, played without injured forward Roque Santa Cruz and winger Aureliano Torres. Paraguay coach Gerardo Martino and top assistant Jorge Pautasso were suspended from the match after being sent off for repeatedly arguing with the referee in Wednesday's win over Venezuela.

Martino, from Argentina, is seen as a leading contender to take over Argentina's national team. The Argentine federation was to meet Monday and decide on the future of coach Sergio Batista, who is reported to be on the way out.

Paraguay won Copa America titles in 1979 and 1953 and reached the quarterfinals at the 2010 World Cup.

FIFA President Sepp Blatter and CONMEBOL head Nicolas Leoz, the leader of the South American confederation, were booed and jeered when they were introduced at 50,000-seat Monumental Stadium in Buenos Aires.