Who will succeed Bob Bradley?

So, with a little time to kill, we fired up our manual conjecture-generator to give you odds on the dozen (or maybe it's 13) favorite potential successors we could think of off the top of our heads. 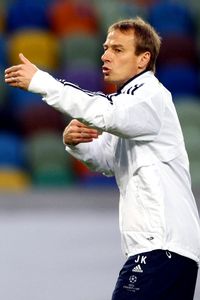 Christof Koepsel/Bongarts/Getty ImagesJuergen Klinsmann was close to getting the U.S. job twice. He's probably a leading candidate to succeed Bob Bradley yet again.

3-2: Juergen Klinsmann, unemployed (unless you count that plum consultancy gig with Toronto FC)

The word on the street -- OK, Grant Wahl via Twitter -- is that an insider at the federation said the choice would be unsurprising. One plus one equals … Klinsmann. Because the former Germany forward has twice before come close to becoming the new coach. In 2006, negotiations collapsed over Klinsmann's alleged demands that the promises the federation was making him be put down on paper. So the job fell to Bradley. In 2010, federation president Sunil Gulati told ESPN.com it was between rehiring Bradley or landing Klinsmann. Again, talks failed, apparently over the same issues. Klinsmann has been sitting by a pool (we presume) since Bayern Munich fired him within a year of his ill-fated appointment there in 2009.

The hugely experienced international coach -- who managed Argentina and Chile, which he got into the habit of playing dazzling soccer at the last World Cup -- was in talks with Gulati in the spring. Rumor has it he was being offered a technical director job at the time, but nothing materialized. Bielsa has since turned down work at Inter Milan and instead taken a job with much less glamorous Athletic Bilbao. Not that this takes him out of the running, because he had taken a job with another club in Spain, Espanyol, just a few months before signing on as Argentina coach in 1998.

The boy wonder Real Salt Lake coach is widely tipped as a future national team coach. But he currently has just four years of coaching experience, all of it with RSL. He has no exposure to the international game as a coach and logged only 14 caps as a player. Kreis isn't ready.

A nice idea, given that Lippi managed Italy to a World Cup victory in 2006. (He also oversaw its abominable 2010 campaign in which Italy ended last in a group with Paraguay, Slovakia and New Zealand.) But the hugely experienced 63-year-old has never in his life played or managed outside of Italy, and that's in a soccer career dating back to 1969. 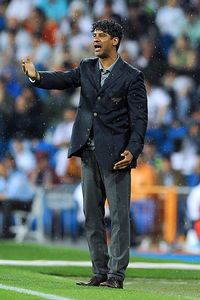 Javier Soriano/AFP/Getty ImagesIs Frank Rijkaard one of the possible successors to Bob Bradley?

Rijkaard had a wildly successful spell as coach of Barcelona from 2003 to 2008 and has international experience with the Netherlands from 1998 to 2000. Leaving desperately unsuccessful club performances with Sparta Rotterdam and Galatasaray aside, he still isn't likely to return the monster check Saudi Arabia no doubt handed him to coach its national team just last month.

Schmid has experience across all levels of American soccer, having spent time coaching the U-20 national team and assisting for the senior national team. Yet the "in-house" Seattle Sounders boss, who has performed well with the recent expansion team, wouldn't offer the status quo-pulverizing shake-up the U.S. national team program so desperately needs.

See Schmid and Kinnear. (Especially since he served as Bradley's assistant on the national team for two and a half years.)

Although he is seldom mentioned as a candidate, the Red Bulls' coach would be a good fit. He has buckets of international experience, amassed in the wake of Sven-Goran Eriksson, when he worked as his assistant at Manchester City and Mexico. Backe also knows the American game pretty well. But he isn't the sort of legacy-building name Gulati is likely keen on bringing in.

The king of mercenaries on the international manager circuit is, frankly, out of the U.S.'s league. He's likely making too much money for the U.S. to buy out his contract with the Turkish federation (Chelsea reportedly tried, and failed, at doing that earlier this summer). Hiddink also tends to take jobs where there's a clear upside in players, and it's hard to see that with this U.S. squad.

The Dutch taskmaster was recently fired as Bayern Munich coach and is looking for a last hoorah at a World Cup. Yes, the U.S. would almost guarantee him that opportunity, but he prefers working with young, coachable talent. The few prospects pushing through the American ranks likely aren't enough to sway him.

Reyna was recently hired to head up the reinvention of American youth soccer. The calculating U.S. Soccer president Gulati is highly unlikely to pull him off the task. Oh, and Reyna has no coaching experience whatsoever.

When Arena was let go after eight years as national team coach when Gulati became president, the two didn't part on good terms. Look for Arena to appear as a backup dancer to Lady Gaga before Gulati rehires him.