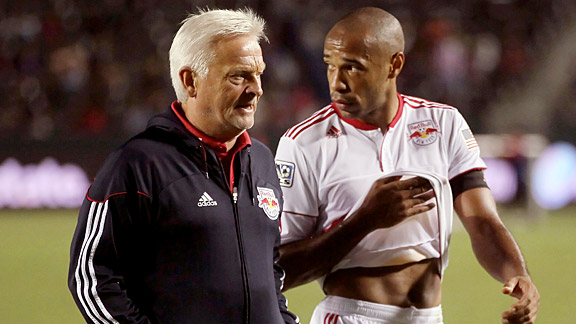 Jeff Gross/Getty ImagesRed Bulls' manager Hans Backe and Thierry Henry don't want to share any theories as to why N.Y. is in danger of missing out on the MLS playoffs.

HARRISON, N.J. -- On Saturday night, star striker Thierry Henry crisply curled the opening goal past the hapless last-place Chicago Fire in the ninth minute. Within 15 minutes, however, the Fire scored. Twice. Like the rain had all night, the boos started to stream down on the home team. The Red Bulls stood with their hands on their hips, shocked, but then again not at all surprised. It's been that kind of year.

Even if the Red Bulls were unlucky to emerge from the field with no more than a 2-2 tie, their 13th in 25 games, they did little to rectify the damage they have inflicted on themselves this season. Nor did they stop short of spending more time harassing the referee than their opponents.

These Red Bulls, bankrolled by the Austrian energy drink, are the most expensively assembled and possibly most talented Major League Soccer team in the league's 16-year history. They were much-hyped during the preseason. Yet they are sinking without trace.

The Red Bulls are 1-4-5 in their past 10 MLS games. They have won one league game since June 10 and two since April. And those wins came against the lowly New England Revolution and Toronto FC. In March and April, the Red Bulls had a winning percentage of .570. Since then, they've won just two more, or 11 percent, of their 18 games and have looked progressively worse. Only five of the league's 18 teams have won fewer games this season.

The math tells a grim story. This team is in danger of missing the playoffs. New York now is third in the weak Eastern Conference with 31 points from 25 games. But the Houston Dynamo are even on points and Sporting Kansas City and D.C. United are just one back; those three teams have one, two and three games in hand, respectively. Had the playoffs not been expanded from eight to 10 teams and the regular season from 30 to 34 games this year, the Red Bulls would already be in danger of elimination. But even with the expanded postseason, things look dire. Each conference is guaranteed only three spots, with four wild cards up for grabs league-wide. In the much stronger Western Conference, the fourth-place Colorado Rapids and the fifth-place Real Salt Lake have nine and five more points than New York, respectively, while Real has played three fewer games. This essentially relegates the Red Bulls to tussling for one of the last two wild cards with at least two of the better-positioned Eastern Conference rivals and Chivas USA in the West, which has one less point than New York but also a game in hand. Oh, and the Red Bulls face three of the league's best teams in the Los Angeles Galaxy, FC Dallas and RSL in their next five games.

What in the world is wrong with the overpaid and underperforming New York Red Bulls? 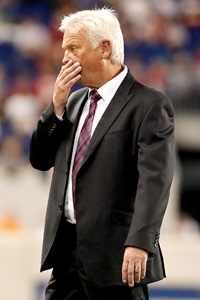 Mike Stobe/Getty ImagesRed Bulls' manager didn't want to talk about what's wrong with N.Y. as its season continues to unravel.

Taking a straw poll among a handful of veteran beat writers who cover the team daily, they easily came up with two dozen reasons why this team isn't functioning. While taking into account that the Red Bulls were hit hard by injuries and midseason national team call-ups, they pointed to many contributing factors, such as: a poorly constructed roster that has overpaid for its regular players to the point that there's no money left to add depth to the squad; the team being long on style and short on grit; indecision and inefficiency in front of the goal (even though the Red Bulls lead the league in scoring, they have missed a gob-smacking amount of chances, leading to all those ties); an overly Eurocentric approach to an American game; an overreliance on the long ball and on injured striker Luke Rodgers; lackadaisical defending (the Red Bulls have conceded the fourth-most goals in MLS); complacency; a refusal to trust teen sensation Juan Agudelo; poor trades (Dwayne de Rosario was shipped in and out within two months at a considerable loss); excessive player turnover; and an under usage of substitutions (head coach Hans Backe has used all three of his subs just once in the last 13 MLS games).

Then there's the highly laurelled Henry. "Thierry Henry has spent more time running his mouth than the field," said one beat writer. Indeed, Henry has spent the year vacillating between moping, glowering at vocal fans in the stands, throwing his hands up in disgust at failed plays (including his own) and excoriating teammates. And this was after announcing before the season that he, the undisputed star, wasn't the team's go-to player. He's nonetheless scored 12 goals, which leads the league, but his increasingly antagonistic attitude toward the press can't be doing team chemistry any favors.

Ask the team itself what is afflicting it and you'll mostly get denial, deflection or outright delusion.

When asked, the boss, Backe, answered with a cold stare. "There's nine games to go," he snapped. "Then we can analyze this season."

"This season is definitely not what we expected coming in," conceded U.S. defender Tim Ream. "But I don't think it's as many different issues as maybe people see."

"Nothing," responded midfielder Joel Lindpere when asked what his team needs to do differently. "I think the team played good today. Compliment for the boys. A win wasn't so important for me today -- I wanted that the team plays good."

The Red Bulls have gotten defensive. In professional soccer, a budding siege mentality is as clear a sign as any that a team is in trouble.

But it's even worse for the Red Bulls. This is a team not only in danger of missing the playoffs, but one that could become the biggest flop in American professional soccer history.