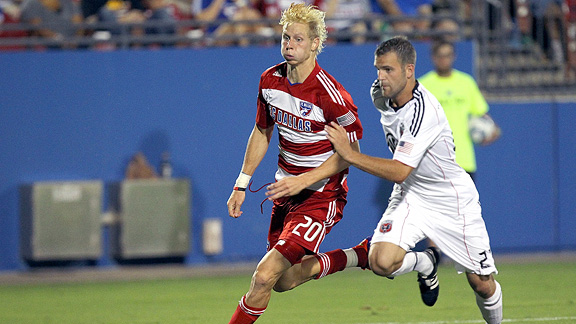 Ronald Martinez/Getty ImagesFC Dallas' Brek Shea is a leading candidate for the most valuable -- and versatile -- player.

Try getting Brek Shea to say something -- anything. It can be an exercise in futility. The FC Dallas player doesn't prefer to communicate with words. But give him a ball at his feet or a paint brush in his hand and Shea will speak volumes. The playing field becomes his canvas; the canvas his playing field.

This season, Shea has fueled the 2010 MLS Cup finalist to the second-best record in the league after it won just one of its first five games and saw last year's Most Valuable Player, Colombian playmaker David Ferreira, go down with a broken leg in April. The spindly 6-foot-3 left winger has a regal air out on the field, but without aversion from handing out a thump here and there. He drifts around, letting his ability out of the hat sparsely. But when he does burst into action, he is unfailingly spectacular. Shea is highly creative, the sort of player who commands only a few moments per game, but can tilt the run of play in those fragments of time.

"He's really stepped up big for us this year," said defender Ugo Ihemelu. "A lot of people had expectations, but I doubt that they expected him to do as well as he's been doing. With David falling off with the injury, he's stepping in there and really picked it up for us."

Ask Shea about his dominant season, and he'll mumble something barely audible about "having some success here and there."

In late July, I caught up with Shea. He was sitting on a chair in the visitors' locker room at Red Bull Arena after a game against New York, staring at the ground. The few wet strands of blond hair that survived the latest round of buzzing and coloring hung between his blue eyes. "I don't like to be ordinary," said Shea. "I kind of just do whatever comes to my mind. I don't really think of what people are going to say about it." The most frequent victim to his whims is his hair, which he has worn in styles ranging from a faux hawk to cornrows.

Shea also expresses himself through his tattoos. There's the Bible verse on his right ribcage, and the ones that read "free bird" on his left forearm in Sanskrit and "Believe" on his left leg. An angel is inked across his back, and on his left bicep the words "Play each day as if the world is watching" command your attention.

But if Shea won't say much about his own dominance, his numbers and other people will. And they'll tell you he's a front-runner to succeed Ferreira as MVP. With 10 goals (third in the league) and five game-winners (best in MLS), it's hard to refute the argument.

"When you look at the number of goals he's scored, you say, 'Yeah, he's your MVP,'" said Dallas head coach Schellas Hyndman.

"He's phenomenal," said defender George John. "Whenever we need a big-time goal he comes through, and it seems like we've gotten a lot of victories off his back."

And if Shea isn't at least a most valuable player in the league, at the very least he's the most versatile. Missing just one of his team's 26 games because of a suspension, he has started six games as a center back, left back or right back, making his goal tally, which trails Henry's league-lead by just two, all the more startling. Shea has started the rest of his games as a central midfielder, left midfielder or forward.

"I tried to put him in a goal and he said, 'No,'" joked Hyndman. "When he does that we'll talk about how versatile he is."

"He's somebody that has the physical assets," said goalkeeper Kevin Hartman. "He's just a freak of an athlete. He's able to make up for some of his misreads on plays with his speed when he's in the back."

The genes come from a father who played football at Virginia Tech and is now a professor in kinesiology at Texas A&M and a mother who teaches yoga and kickboxing there, and who was desperately disappointed when Shea decided to skip college and head straight for MLS when he was drafted second overall by Dallas in 2008 as a 17-year-old. (With his Generation adidas contract expiring after the season, FC Dallas recently inked Shea to a four-year extension, tying him to the club through 2015.) 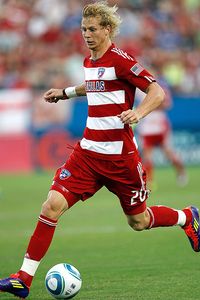 As a freshman in high school, Shea quit the football team in favor of U.S. U-17 residency in Bradenton, Fla. His football coach told him he'd never make it in soccer. Three years later, he was a professional, living across the street from Pizza Hut Park and riding his moped to practice. Before his rookie year was out, he'd been called into the senior national team for a World Cup qualifier against Barbados. In Oct. 2010, he made his playing debut, still in time to become the first player born in the 1990s to represent the U.S. He appeared scared stiff; still, he got a second cap against Chile last January. In Jurgen Klinsmann's first game in charge of the U.S. on Aug. 10, Shea played again. This time he helped turn the game, serving Robbie Rogers the equalizer on a platter.

All the above is good and well, but it isn't what makes Dane Brekken Shea remarkable. It's what he leaves behind on a different kind of canvas -- white, rather than green. It's with his hands that he's most impressive, not his feet.

A year and a half ago, Shea took up painting. "I just bought some canvasses and some paint and started doing random stuff in the garage," he said.

"He's a lefty, and those lefties tend to be pretty creative," said Ihemelu. "He comes up with some pretty cool stuff."

Shea started out by making still paintings of flowers. He moved on to abstract art. Today, he mostly paints in pleasing splotches, in colors as bright as the shoes he dons on and off the field. You can see Shea's work here, at leftfootstudio.com.

People took note. Shea's agent suggested he donate some of his works to FC Dallas's charity to auction off. Ten of his pieces fetched nearly $10,000. "I didn't think it would do that good," said Shea.

Others did. "You can see by his demeanor, in the way he dresses, his hair -- you can see he's a little bit different," said Hyndman. "So it didn't surprise me."

Shea recently moved into a bigger abode. "I've been over to his house quite a few times and there's paint everywhere, all over the garage, his paintings all over the walls," John said.

Few hang there for very long. "As people come over and family visits and auctions take place, they slowly disappear," Shea said. "I need to get back in there and refill the walls."

Shea can command good money for his paintings, even if the money doesn't do it for him. "If I could and the supplies were free, I would just paint them and give them away," he said. "Obviously, the supplies don't pay for themselves, so I've had to sell them. I've not made any profit. Most of them have gone to charity." Although the club's owners have purchased a few originals, he won't let teammates buy paintings. He says he'll make them one special for free, but the waiting list is getting long.

Hyndman doesn't own one either. "No," he cracked. "They're too expensive."

Shea's creative outlets, soccer and art, converge. And it perhaps isn't a coincidence that his rapid development on the field has coincided with his artistic awakening. "It gives you a way to forget about other things and relax and do whatever and then it comes out through painting," Shea said. "I think it's bad if you focus on soccer all the time. It definitely helps me get away from soccer and express myself in a different way."

Painting, he says, has helped his soccer. "I like to express myself on the field, but being able to [paint] and just relax and there's no right or wrong, it helps me on the field to play soccer, and be serious because I've relaxed in my free time."

More specifically, the creative outlet has allowed him to pin down how he performs best: by taking his mind off the task at hand, a sort of focus through absent-mindedness. "When I paint, I'm not really paying attention to what I'm doing and then when it's finished I look at it and think, 'Wow, I just did that,'" Shea said. "And in soccer, I play my best when I don't think about it. You're playing good soccer when your mind is free of what you're doing."

As an example, Shea brings up the goal against Toronto. "I don't remember what I did," he said. "I went back [and watched it] and thought, 'Wow, I did that?'"

He said all these things to himself, of course, as he does most things. Shea has figured out how to tap into his innermost creativity, both on the field and off, using his limbs as communicators and his mouth merely for essential tasks.