Five things we learned from the EPL

Great rivalries don't always produce great matches. We were reminded of that this past weekend when Liverpool hosted Manchester United. The opening 70 minutes were drab, almost snooze-worthy. Fortunately, it picked up in the final 20. The 1-1 draw allowed Manchester City, which defeated Aston Villa, to go top of the table by two points. And, rather quietly, Chelsea continues to win.

Here are five takeaways from the Premier League weekend. 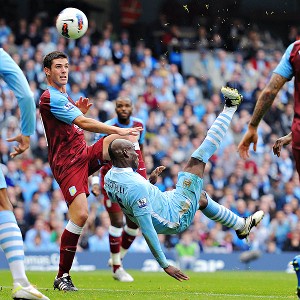 Michael Regan/Getty ImagesMario Balotelli continued to strengthen his case that he should be a starter after his sublime overhead kick put City ahead 1-0 against Aston Villa.

1. Nothing the Mata with Juan

That Chelsea, three points behind the league leader, is keeping pace with Manchester City and Manchester United is largely down to youth. New signing Juan Mata and Daniel Sturridge, back from his loan spell at Bolton, have sizzled. Without the duo the Blues would be struggling.

Every time Arsenal fans watch Mata, they must want to pull their hair out. He was supposed to join the Gunners, not Chelsea, in the summer, but his high wage demands reportedly scuppered a deal. They'll get a chance to see Mata up close and personal at the end of the month, when Arsenal makes the short trek to west London.

Mata, likened to Chelsea icon Gianfranco Zola by "Match of the Day" analyst Alan Shearer, pulled the strings in the 3-1 win against penniless Everton on Saturday. His vision and creativity were there for all to see on the opening goal. Mata unlocked the Everton defense with a ball over the top to left-back Ashley Cole, whose cross was then converted by an eager, onrushing Sturridge. Indeed, the two Chelsea players complement each other nicely. Sometimes Sturridge's control in tight spaces can let him down, whereas Mata is a maestro with the ball in the final third. On the other hand, he doesn't have Sturridge's pace. Together, they're making things happen at Stamford Bridge.

For Chelsea to maintain the title challenge into 2012, Mata and Sturridge need to keep it up -- and Fernando Torres (serving the second of a three-game league ban) and Didier Drogba need to start scoring.

2. Mario was super on the day

The last thing Roberto Mancini wanted in the wake of the Carlos Tevez saga was for his other strikers to start slumping. Then, pretty soon some of the fans would likely want Tevez back in the lineup, and if that was to happen, Mancini's authority would be undermined.

The manager was probably relieved to see Mario Balotelli put in another strong performance in a 4-1 victory against previously unbeaten Aston Villa. It was a typical Balotelli outing: He clashed with the away fans, scored a theatrical overhead goal (after which he stared down Villa fans and gave them the "shhh" sign), quarreled with teammate Yaya Toure and didn't shy away shooting from distance. The Italian, who netted for the fourth straight match, will be pushing for a starting spot when City travels to United on Sunday. Mancini has to decide whether Balotelli can be trusted to keep his emotions in check in what's sure to be a hostile environment.

Balotelli's presence in the starting XI was testament to Manchester City's depth. With Sergio Aguero out injured and Tevez frozen out, Mancini could afford to rest Edin Dzeko and Samir Nasri, coming off intense Euro 2012 qualifiers, and not start midfield playmaker David Silva. Expect at least two of the three to start at Old Trafford.

James Milner scored one of the goals of the weekend by curling a shot past Shay Given. The hard-working midfielder began the move with a long, cross-field pass to Adam Johnson before covering ample ground to get into a shooting position. Then, with the ball served up to him at the top of the 18-yard box, Milner kept his head down and hit through the ball with sublime skill. It isn't often the former Villa player gets into the scoring act, but this shot was worthy of any world-class player.

Some would say United manager Alex Ferguson lost the plot last week. First, he suggested that Liverpool versus Manchester United was a bigger game than El Clasico. Then for his team's trip to Anfield he sent out an under-strength side, naming Wayne Rooney, Nani and Javier Hernandez on the subs' bench, and not including Nemanja Vidic and Dimitar Berbatov in the squad at all.

But Ferguson isn't losing it. He's still got it, in fact.

Fergie had the last laugh as United rallied for the 1-1 draw. Had Ryan Giggs not broken away from the wall to protect his privates (jokes aplenty on Twitter) on Steven Gerrard's mediocre free kick, United could have left Liverpool with all three points.

Ferguson introduced Rooney, Nani and Hernandez late in the second half, and all three contributed. Hernandez's instinctive finish from Danny Welbeck's glancing header in the 81st minute got United level, and Rooney preserved the point. His aerial challenge on Luis Suarez prevented the ever-lively Uruguayan from scoring a winner. United keeper David De Gea made a flurry of fine saves -- yet it wouldn't be De Gea if he didn't flap at a corner kick.

It's still early, but all three promoted teams -- Norwich, Swansea and QPR -- aren't being outclassed. None are in the relegation zone.

Norwich, however, is the team in form, winning three of its past four after a worrying 0-2-2 league start. Tall, imposing striker Steve Morison and Anthony Pilkington, who blew a golden chance against Manchester United on Oct. 1 with the game scoreless, impressed in Saturday's 3-1 win against Swansea. Morison, interestingly, now appears to be the first choice up top instead of Grant Holt, a goal machine in recent seasons. Swansea, meanwhile, is the only side not to have collected a point on the road. It needs to fix that to survive.

Following a flying start, QPR is stumbling, winning one of its past seven after a 1-1 draw at home against Blackburn. QPR manager Neil Warnock finally lost patience with ineffective striker Jay Bothroyd, dropping him to the bench in favor of veteran Heidar Helguson. Helguson duly found the back of the net with an exquisite chip (which perhaps was meant as a cross). More bad news for Warnock: DJ Campbell, part of Blackpool's free-flowing lineup in 2010-11, will be sidelined for about two months with a foot injury.

And up next for Rangers? Only an intense west London derby against Chelsea.

5. This will be a long, long season for Wigan

Credit Roberto Martinez. Despite Wigan continuing to lose, he looks so positive and upbeat in post-match interviews. That didn't change Saturday, when the Latics fell 3-1 to slumping Bolton to suffer a sixth straight loss. By far, it was the shoddiest defensive display of the weekend. All three Bolton goals came as a result of Wigan giveaways, two by central defender Antolin Alcaraz (send him to soccer's Alcatraz), who should know better. Keeper Ali Al Habsi, overall a positive for Wigan, saved a Kevin Davies penalty, but his inability to scoop up a weak shot indirectly led to the spot kick. Devoid of midfielders Tom Cleverley and Charles N'Zogbia, who helped the team last season only to move on, Martinez would trump himself by keeping Wigan in the Premier League for yet another season. To do that, however, he'll have to abandon any notion of playing beautiful football and just try to play winning football -- long balls, set pieces, whatever it takes.