The best and worst of the MLS season

The red carpet has been freed of pet stains and rolled out; hot-pink stretch Hummers, high-tops and bling buffed to a high shine; tuxedo T-shirts pressed and hair shaved into whimsical shapes, because … it's time for the "First Annual ESPN.com Excellence in MLS and Some Other Dubious Categories Awards"!

Broken down into four categories -- teams, players, transactions, and miscellaneous -- the year's "honors" address some of the best and worst related to the league in this 2011 season, which heads into postseason play this week.

Teams:
Overachieving team of the year: Philadelphia Union
In its 2010 expansion season, Peter Nowak's young side placed 14th out of 16 teams. This season, it came in third in the Eastern Conference, having paced it for some time and playing high-energy, attacking soccer. 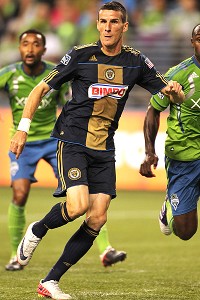 Underachieving team of the year: New York
The most expensively assembled club in MLS history played nothing like it this season, scraping the final wild-card spot off the bottom of its rotten barrel and winning just 10 games out of 34.

Most improved team: D.C. United
In 2010, United's fall from the pedestal it had heaved itself onto in the league's early years was complete, as it was by far the worst team in the league. Under former midfield captain Ben Olsen, United is rebuilding and looked rejuvenated this season, even making a credible run at the playoffs.

Biggest decline: San Jose Earthquakes
Last year's sensation was this year's deception. Chris Wondolowski & Co. couldn't follow up on their run to last year's Eastern Conference final, having knocked out the New York Red Bulls in the previous round.

Lopsided season award: Sporting Kansas City
The re-christened Sporting -- the erstwhile Wizards -- won just one of their first 11 games, losing six of seven over one particularly bad stretch. Then, as June brought the opening of Livestrong Sporting Park and some actual home games, Kansas City lost just three more games the rest of the way, winning 12 and the Eastern Conference, too.

Steady Eddies award: LA Galaxy
From dysfunctional to dynastic in just three years, the Galaxy never threatened to fall from their perch all year. So consistent was Bruce Arena's side that it won at least 10 points in four different months, and its longest stretch without a win lasted just three games -- to open the month of May -- after which it won four straight and didn't lose in 12.

Expansion team of the year: Portland Timbers
The Vancouver Whitecaps may have drawn good crowds all season, no matter how bad the team was, but the Timbers did the same. And they competed for the playoffs until the final week and won all five of their first home games. 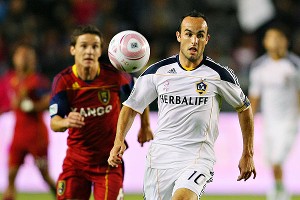 Team of the year: Los Angeles Galaxy
The Galaxy won the mighty West for a third season in a row and the Supporters Shield for a second year running. They posted a massive 67 points on 19 wins and just five losses. Plus, L.A. is through to the CONCACAF Champions League quarterfinals.

Players:
Goal of the year: Eric Hassli, Vancouver Whitecaps
Graham Zusi's free kick deserves a mention, but you don't see a goal like Hassli's every year, or perhaps even every few years, as evidenced by the 1.3 million (and counting) YouTube hits.

Miss of the year: Mario Balotelli, Manchester City
Sadly, Mario Balotelli's ill-conceived back-heel howler didn't occur in an MLS regular-season game. Then again, neither did this Chris Wondolowski hack job for the U.S. against Panama. So Balotelli takes the prize anyway.

Underperformance of the year: Rafa Marquez, New York Red Bulls
On the books for a guaranteed $4.6 million in 2011, Mexico star Marquez, lately of Barcelona, may have given his club the worst value for money over a single season in MLS history. Not only does the man have a talent for splitting his own defense by going missing in action several times per game, but he was eventually displaced from the back line by minor league journeyman Stephen Keel.

Overperformance of the year: Mauro Rosales, Seattle Sounders
Rosales isn't a nobody. He starred at the 2004 Olympics with Argentina, winning a gold medal; has 10 caps for his senior national team; and played for Ajax Amsterdam for several years. But he slipped into Seattle under the radar and at a ludicrous $42,000 salary. His 13 assists, meanwhile, were third-most in the league. 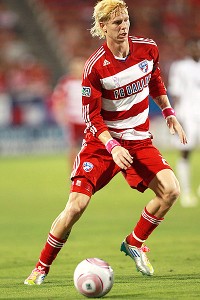 Rick Yeatts/Getty Images2011 has proven to be a breakout year on both the club and international level for FC Dallas' Brek Shea.

Breakout player of the year: Brek Shea, FC Dallas
Physical 21-year-old left winger Shea had an unequivocal breakout year for Dallas, helping to cover for injured league MVP David Ferreira with 11 goals and four assists. He did it while assigned roles all over the field, including right back, and tied for the league lead with five game-winning goals to boot.

Failure to launch of the year: Victor Estupinan, Chivas USA
Big things weren't really expected from first-round draftee Estupinan. But when you go around announcing that you're expecting to score "25 to 30 goals", it doesn't look too good when you score just one.

In-season redemption story of the year: Juan Pablo Angel, Chivas USA
After the Red Bulls wanted no part of their long-time forward ace during the offseason, Angel was picked up by the Galaxy. They dumped him in August, after which Chivas nabbed him. But for the Goats, JPA scored seven times in nine games.

Accidental hero of the year: Mike Magee, Los Angeles Galaxy
After the Galaxy burned through both of its goalkeepers -- due to injury and a red card -- by the 43rd minute of its June 25 game against the Earthquakes, striker Magee strapped on the gloves and preserved the clean sheet, earning player of the week honors.

Accidental schlemiel of the year: Kasey Keller, Seattle Sounders
Throughout a marvelous career, Keller has made an improbable number of extraordinary saves. Perhaps it was karma then that he bundled in an own goal so spectacularly against Real Salt Lake.

Clutch performance of the year: Dwayne De Rosario, D.C. United vs. Real Salt Lake on 9/24/2011
Just watch a video of the match performance. It says more than words.

Choke of the year: Blaise N'Kufo, Seattle Sounders
To choke is to disintegrate in your team's hour of need. N'Kufo, a designated player no less, did even more than that, walking out on his team hours before its season opener and retiring soon thereafter.

Goalkeeper of the year: Josh Saunders and Donovan Ricketts, Los Angeles Galaxy
Between them, the Galaxy's goalkeepers allowed a puny league-best 28 goals, combined for easily the best goals-against average, most shutouts and were tied for the highest save percentage.

Rookie of the year: Joao Plata, Toronto FC
Not technically a rookie by MLS standards because he played seven pro games for LDU Quito in his native Ecuador, the 5-foot-3 forward nevertheless had far and away the most impact of any player to come out of the 2011 MLS Superdraft, bagging three goals and five assists in MLS for a miserable Toronto team and scoring four times in five GAMES in the CONCACAF Champions League -- more than half of his team's output of seven. 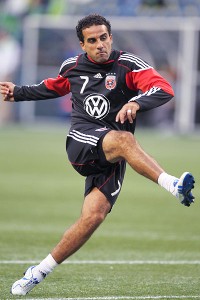 Most valuable player: Dwayne De Rosario, D.C. United
Since coming over in a trade from the Red Bulls on June 27, De-Ro scored 13 goals in 18 games and collected seven assists for United, single-handedly keeping his team in the playoff hunt. His goals and assists were directly responsible for 18 of the 20 points D.C. amassed after he arrived.

Transactions:
Best transfer of the year: Dwayne De Rosario, acquired by D.C. United from New York Red Bulls
With De Rosario badly misused by New York, which tried and failed to push the second forward into a central midfielder role -- inevitably leading him to get in the way of Red Bulls striker Thierry Henry, who also likes to roam behind the deep forward -- United seized its chance. All it gave up for De Rosario was central midfielder Dax McCarty, whom it had acquired along with allocation money for run-of-the-mill defender Rodney Wallace and a fourth-round 2011 draft pick the previous winter.

Worst transfer of the year: Dwayne De Rosario, acquired by New York Red Bulls from Toronto FC and dealt on to D.C. United
On April 1, New York sent left back Danleigh Borman and central midfielder Tony Tchani, solid and good prospects, respectively, to Toronto in addition to a first-round 2012 draft pick in exchange for want-away star forward De Rosario. De-Ro was then, as mentioned above, dealt on to United for McCarty, who lost his starting job when Rafa Marquez was moved into midfield later in the season. For the above-average McCarty, who might not have a future with New York as anything more than a good substitute, the Red Bulls gave up two prospects, a first-round pick and a chance to employ the league's most influential player.

Discovery of the year: Camilo, Vancouver Whitecaps
Plucked from the South Korean K-League Gyeongnam FC's reserve team, after a successful spell with Qormi FC on Malta, Camilo's silky skills produced 12 goals and three assists for a Caps team that badly needed them.

Homecoming: Charlie Davies, D.C. United
A slew of national-teamers returned to the MLS mothership this season -- Jay DeMerit, Benny Feilhaber, Freddy Adu -- but Charlie Davies provided not only the feel-good story but the best performance of any of them, as well. On loan from French club Sochaux, Davies scored 11 goals, proving invaluable for United early in the season before a dip in form and fitness hamstrung the striker, who had barely survived a car crash 18 months before the start of the season.

Miscellaneous:
Foot-in-Mouth Award: Rafa Marquez, New York Red Bulls
While acquitting himself poorly on the field all year long, Marquez, incredibly, blamed his teammates for his failings. "I think this is a team game and unfortunately there isn't an equal level between my teammates and I," he said after a 3-1 September loss to Real Salt Lake. "I'm focusing on performing at my highest performance, at the highest level. That doesn't mean the whole back line can perform at the same level, that's the problem."

Ref-bash of the year: John Spencer, Portland Timbers
First-year Timbers head coach Spencer has long been outspoken. He has changed little now that he's a head coach, skewering referees several times. "My 67-year-old mother-in-law can see it from the club deck," Spencer said of one non-call that caused him particular dismay. "There's an official standing right there and you're asking me why I'm having a go at the fourth official?"

Non-call of the year: Jonathan Leathers' ankle-fracturing tackle on David Ferreira
While not as gruesome as Brian Mullan's leg-breaking take-down of Steve Zakuani, Leathers' ankle-breaker on Ferreira was at the very least a yellow card, if not a red, like Mullan's tackle. Amazingly, Leathers escaped all punishment.

Inadvertent practical joke of the year: George John, F.C. Dallas
Halfway through the season, young Dallas defender John was very seriously under the impression that he'd be rewarded for his 2010 MLS Cup-losing own goal with a transfer to Blackburn Rovers. So convincing was the English Premier League club that it even sent John scurrying off to Greece to try to secure a passport in order to enable his move. And then, at the last moment, as the sale of the incumbent center back, Christopher Samba, fell through, it was called off -- we can only imagine to hoots and whoops and cries of "Gotcha!" Not really, though.