Previews, predictions for Houston vs. Philly and Colorado vs. Sporting

Considering that the Western Conference of MLS produced the league's top four sides in terms of point totals this season, it might seem natural to downplay the chances of any Eastern Conference team making a stirring run through the playoffs to capture the MLS Cup on Nov. 20. 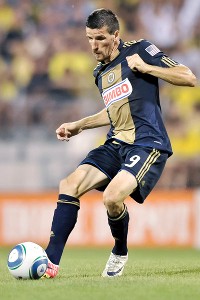 But a closer view at the four semifinalists from the Eastern Conference half of the playoff setup reveals a quartet of sides capable of making an impact -- which includes last season's MLS Cup champion (thanks to the crossover format of the league's playoffs); one of the strongest postseason performers of not-too-distant campaigns; and two of the league's most improved sides in 2011.

Here is a look at the East's semifinal matchups, which begin play this weekend.

An old soccer idiom posits that you can't win with kids. Young, inexperienced teams, that is, tend to come up short in the end. Yet the Houston Dynamo and Philadelphia Union -- who ended second and third in the Eastern Conference, respectively, during the regular season -- both rely on a fairly young core of players. Sunday (5 p.m. ET, ESPN2/ESPN Deportes/ESPN3), they'll play the first match of their home-and-home series to decide who will face the winner of the Sporting Kansas City-Colorado Rapids series in the one-game Eastern Conference final.

Aside from their demographics, the two clubs have more in common. Both missed last season's playoffs after placing second-to-last in their respective conferences (the Dynamo were still a Western Conference team while the Union were an Eastern expansion team) and both are irrefutably on the ascent. But whereas the Dynamo franchise has won four MLS Cups (two of them coming in its previous incarnation as the San Jose Earthquakes before moving to Houston in 2006), the Union are merely a 2-year-old club.

"The Houston Dynamo have guys who have already won championships and know how to do it," Union coach Peter Nowak said, pointing to several veteran Dynamo holdovers from the 2006 and 2007 championship teams. "They've already been in this situation. Ninety percent of my guys have never been in this situation." And therein might lie the answer as to who will win this series.

After a long slump, French Union forward Le Toux -- who came in fifth in MVP voting in 2010 after leading the Union with 14 goals and 11 assists -- struck another rich vein of form toward the end of the 2011 regular season. He scored just once in his first 22 games -- although he did dole out eight assists -- but scored 10 goals in his final 12, including a stretch of nine goals in eight games. Over those final dozen games, the Union as a whole scored 17 times, meaning Le Toux bagged 58.8 percent of his team's goals.
[+] Enlarge 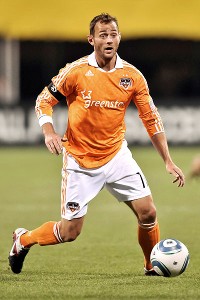 Jamie Sabau/Getty ImagesMidfielder Brad Davis is key to Houston's fortunes in the postseason.

"The first thing I think of on that team is the offensive threat that is Sebastien Le Toux," Dynamo veteran midfielder Brad Davis said. "The key to us is keeping an eye on Sebastien and not giving him too much space." Although the Union have played Le Toux up top by himself of late, neutralizing him and cutting off his supply will be crucial for the Dynamo.

In 2010, the Union conceded 49 goals in 30 games. In 2011, that number fell to 36 in 34 games. Much of that had to do with the steadying influence of Colombian imports Valdes and Mondragon. Valdes's form can be fickle, though, and Mondragon, 40, is at constant war with his decaying body. Adu remains a talent capable of changing a game with a single touch, but he too is mercurial.

Former U.S. striker Ching, 33, had his least productive season since breaking in as a rookie in 2001. His career looks to be petering out. Also underwhelming was Honduras striker Costly, a midseason addition. Yet both still have the scoring touch to decide this series. As does center back Boswell, whose nifty finishes have yielded five goals, tied for the four-way team lead.

With a preposterous 40 assists over the last three regular seasons for the Dynamo, Davis's share in how his team fares cannot be understated. He is perhaps the best lefty American ball striker out there, and his precision crosses and set pieces should put the Union's defense on high alert every time around.

When the Union are relegated to chasing the game, rather than setting the tempo and pressing all over the field, they often find themselves in trouble. "We have to press the defense, our strength is that," Le Toux explained. "We have lots of great players to play the ball on the floor, use the wings -- play and move and find the opening and make the other team run." The Dynamo will look to slow the Union down.

Outlook:
With a team that has never been in the postseason before, Nowak rightly worries that it won't be able to dial up to the necessary intensity. "As soon as the first whistle is blown, everybody has to be ready for a fight," he said. "And sometimes it's not pretty. You win, you go through. If not, you go fishing. They need to understand that."

In four games over two seasons, the Union have never lost to the Dynamo, winning twice and drawing twice. But the Dynamo are 4-0-2 in their last six games and, while slightly less talented, are generally the more seasoned team. Expect this series to be a game of chess that will be close until the end, but for the Dynamo to pip the Union 2-1 on aggregate. 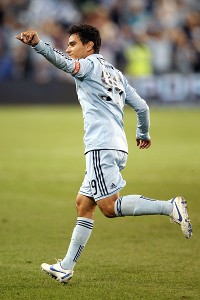 The way Colorado Rapids coach Gary Smith looks at it, he's just happy his defending champions are still in it at this point, having beaten the Columbus Crew 1-0 in Thursday's wild-card game. After last season's unlikely run to the club's first MLS Cup title, the Rapids were hamstrung by their grueling CONCACAF Champions League participation (wherein they were eliminated), a torrent of injuries and a long suspension to key midfielder Brian Mullan. "There have been numerous issues this year that have made it probably the most difficult season I've had to date at the club," said Smith, who has been mired in battles with the front office during his third year in charge.

Equally stumped by the way his team's season has gone is Smith's Sporting Kansas City counterpart on Sunday (7:30 p.m. ET, Fox Soccer), Peter Vermes. In a bizarre season, which fittingly began with eccentric American football player Chad Ochocinco trialing with the team, Sporting won just one of its first 11 games -- all of them on the road while Livestrong Sporting Park was completed -- but lost just thrice more the rest of the way, picking up the Eastern Conference regular-season title en route.

"I didn't know it was going to lead to the place we are today, that we would be first in the division," Vermes said. "You learned a lot about the team; we've overcome a lot of adversity."

Kansas City has the rather rare luxury of having four strong and productive strikers in designated player Omar Bravo, Teal Bunbury, and Kei Kamara, who combined for 27 goals, along with rookie C.J. Sapong, who bagged five. It takes full advantage of this edge by fielding three of them in its starting lineup, with Bravo and Kamara making runs off target man Bunbury while Sapong acts as the super-sub.

Colorado has a dependable back line, anchored by Drew Moor and the quick Marvell Wynne, but its marauding wing backs, probably Kosuke Kimura and Miguel Comminges, will have to stay home to keep Moor and Wynne from being overrun. Fielding sufficient manpower to absorb Sporting's attacking will be paramount for the Rapids.

From distance, attacking midfielder Graham Zusi's right boot can be splendid, and he will be counted on to feed the forwards, too. Bravo is one of the most reputable and talented forwards plying his trade on this continent and works equally as hard on the other side of the ball. Arnaud, meanwhile, missed much of the summer due to an injury but is the tough, scrappy captain that allows others to push forward. 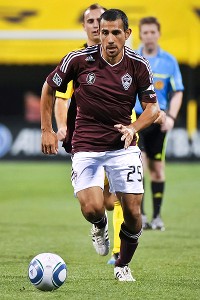 That the Rapids have a scoring problem amongst their forwards is best exemplified by the fact that Larentowicz, a classic two-way midfielder, leads the team with seven goals, having pelted opposing goalkeepers with dangerous long shots all year. That makes the timing of Jamaican striker Cummings's rediscovery of his confidence all the more opportune. After injuries and meandering form limited his production to just three goals during the season -- after he got 14 in 2010 -- Cummings scored the winner in the wild-card game and looked more like his old self. On Cummings's flank, Gambian winger and two-time malaria survivor Nyassi is a scourge to opposing defenders with his darting runs, creating room and service for the forwards.

Mastroeni is the Rapids' captain, heart and soul and central midfielder. He missed the wild-card game because of lingering symptoms of a concussion and isn't a guarantee to start in the first leg against Sporting, either. Yet if the Rapids want to go on another run this postseason, they can ill afford to do without him.

A great many times this season, Sporting has either pulled long overdue wins out of the fire or indeed given away well-deserved leads very late in games. "You need to finish your opportunities and be able to lock the game down and not give any silly opportunities away," Vermes warned. This tendency is even more problematic in the playoffs, where late goals send home undeserving teams.

Outlook:
Between two talented, offensive-minded and well-matched teams, this series is likely to spark fireworks. The Rapids had the most dangerous attack of 2010, although it is now without the injured Conor Casey, while the same could be said of Sporting this year, having scored the second-most goals of the 2011 regular season after the Seattle Sounders. With a few early goals, this matchup could turn into a goal-fest, which is why we're calling it a 5-3 win to Sporting on aggregate.