SKC and Houston poised to advance

After the opening leg of the Eastern Conference semifinals of the MLS playoffs, Sporting Kansas City and the Houston Dynamo are on track to meet in the winner-takes-all Eastern Conference final Sunday. That's if they can nurse their respective 2-0 and 2-1 leads through their second-leg matches. On Wednesday, Sporting will face the Colorado Rapids at home, and on Thursday, the Dynamo will host the Philadelphia Union.

The conference semifinals conclude with the return legs Wednesday and Thursday to decide which four teams reach the conference championships. You can watch three of the four matches on ESPN2, ESPN Deportes and ESPN3.

Both first legs were highly entertaining, testy and packed with skillful goals. Heading into the second legs, there is a strong likelihood of more quality football.

Colorado has to be the unluckiest defending champion in memory. Early in the season, the Rapids were struck by a biblical plague of injuries to key players. They nevertheless won a wild-card spot and beat the Columbus Crew 1-0 to advance to the semifinals. In that game, however, they lost influential midfielder Jamie Smith, joining Anthony Wallace, star striker Conor Casey and bedrock captain Pablo Mastroeni in the infirmary of Dick's Sporting Goods Park. In the first leg against Sporting on Sunday, wouldn't you know it, the Rapids not only lost the game, but defenders Kosuke Kimura and Drew Moor and forward Caleb Folan were injured. All three had to come off before the 57th minute, robbing coach Gary Smith of any tactical substitutions. All three are ruled out for the second leg; Kimura is out for the season, and Moor and Folan are doubtful for the rest of the remainder of the playoffs.

"It's been tough; it's been challenging," Rapids goalkeeper Matt Pickens said. "The injuries have piled up, and it does take a toll on us. We're just a little beaten up right now. There's no doubt we've lost a lot of big key players who won a championship for us last year. It's a big blow for us."

The Rapids will be receiving little sympathy from a revamped Sporting Kansas City. Having missed the playoffs the previous two seasons as the Wizards, Sporting has a new stadium, a new name and a new, exciting style that propelled its surge to the Eastern Conference regular-season title after an abject start to the campaign that saw the team win one of its first 11 matches. 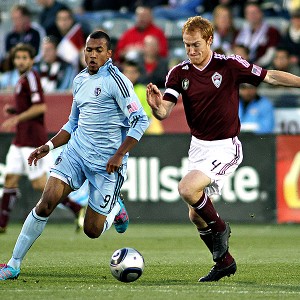 Marc Piscotty/Getty ImagesTeal Bunbury scored both of SKC's goals against the Rapids in the first leg.

Even without Mexican designated player and splendid offseason pickup Omar Bravo to lead the three-headed front line because of a slight groin strain, Sporting was clinical against the Rapids on Sunday, with Teal Bunbury scoring both goals. First Brazilian journeyman defender Julio Cesar intercepted a ball and threaded it through for Bunbury to latch on to and finish. Then Graham Zusi, Sporting's breakout attacking midfielder, slipped Bunbury the ball in the box, after which he was brought down and converted the penalty.

They were exactly the sort of plays that make Sporting dangerous. The team didn't, and usually doesn't, dominate possession or the run of play. But its three central forwards -- Bravo, Bunbury and Kei Kamara -- all scored nine goals during the regular season, giving Sporting maximum yield for its efforts in tight games with small spaces. How Colorado, with its heavily depleted back line, missing three of four regulars, solves this problem will decide the outcome of this series. (How anybody, for that matter, will solve the KC Three at any point in the playoffs is just as questionable.)

Colorado was sluggish after losing another round of personnel Sunday, so the series looks all but locked up. However, Sporting will take nothing for granted and appear at full strength, in spite of the congested playoff schedule. "Obviously we have to be intelligent in how we approach the game, but we're going to play," Sporting coach Peter Vermes said. "There's many results in the history of this league where one team is up after the first leg and the other comes from behind. We realized that there's six halves to play here: two full games and a [potential] minigame.

"They're not going to go without a fight, and we realize that," Vermes added. "We're completely focused on this game. We haven't won anything yet, we haven't advanced yet and then we'll focus on the thereafter."

There are several schools of thought on how to approach two-game playoff series. Philadelphia coach Peter Nowak clearly subscribes to the one that believes the first leg, especially when played at home, should be approached conservatively before you go all out in the second leg.

As it has all season, Philadelphia went into the first game against Houston with defense on the mind. Nowak fielded two holding midfielders in Brian Carroll and Stefani Miglioranzi ahead of his four defenders, and burdened wingers Justin Mapp and Michael Farfan with a lot of defensive responsibilities. That essentially left forwards Sebastien Le Toux and Danny Mwanga to fend for themselves up front. Trouble is, Houston isn't the team against which to do that. Sit back long enough, and it'll eventually punish you. 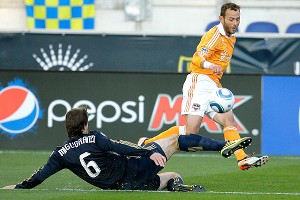 Chris Gardner/Getty ImagesBrad Davis and the Dynamo are unlikely to alter a successful approach and will keep attacking Philly.

And so it proved, as it took the Dynamo all of six minutes to score their first goal, when a predictably laser-guided free kick from Brad Davis was cleverly nodded on by Andre Hainault. In the 30th minute, veteran Brian Ching split the defense to set up a second Houston goal by Calen Carr. Philly had managed to stay in the game when it nabbed a bit of a lucky goal in the seventh minute after a Michael Farfan chip deflected right into the path of Le Toux, whose finish was precise.

Philadelphia learned a quick lesson about playing Houston. After the Carr goal, Nowak started moving more and more players into central midfield, giving his team a better rhythm and finally getting reliable service going to his forwards, coming close to an equalizer time and again.

Heading into the second leg, Nowak had best heed the lessons of the first. He is down a goal and playing on the road. "They know that we're going to have to come and attack, so you might see more of a combination of the second half here," Union assistant coach John Hackworth said. "Both teams are going to go in tactically understanding that. We just need to be a little better in attack and get [our attackers] in better positions and allow them to execute in front of goal."

Houston, meanwhile, is unlikely to alter a successful approach and park the bus; it intends to keep attacking. "Playing out the clock for 90 minutes is not the best idea stepping onto the field," coach Dominic Kinnear said.

Kinnear knows full well that the Union are at their best when their young, technical players get to zip the ball around quickly in the opposing half, however reluctant Nowak often is to let them. "We need to keep our possession going and know that if they throw numbers forward and if we're sharp in our first pass," Kinnear said, "then we can bypass a lot of their forward players and push up. But we'll have to be strong holding the ball."

The return leg promises the intrigue of a tactical game of chess. And plenty of goals, too.