How to fix the MLS playoffs

In a lot of ways, it's easy to pick on Major League Soccer. It's young, ambitious and growing. It has to tread carefully, reconciling traditional American consumption of professional team sports -- playoffs, conferences and the like -- and worldwide soccer traditions to be appealing domestically and taken seriously abroad. In this grand bargain for cultural significance in disparate sports landscapes, the league sometimes opens itself up to derision as an upshot of its broad experimentation.

So cut MLS some slack. The playoffs, however, remain a mess, and deserving of our criticism.

The league's constant tinkering with the playoff format -- done gradually to avoid jarring changes, MLS says -- has been confusing and detrimental to the creation of tradition, a concept so very important in sport. The conference semifinals alone have gone from a best-of-three format to first-to-five-points to a two-leg home-and-home format.

In the 2011 MLS Cup playoffs -- which will conclude when the Los Angeles Galaxy hosts the Houston Dynamo on Nov. 20 after a two-week layoff (we'll get to that later) -- two teams were added to the original eight. Clubs ranked ninth and 10th overall during the regular season played Nos. 7 and 8 in wild-card games to advance to the conference semifinals -- a system openly criticized by L.A. head coach Bruce Arena and his Real Salt Lake counterpart, Jason Kreis.

These playoffs exposed several problems. Here, then, are some suggestions for how the league can stage a fair, logical and straightforward postseason. 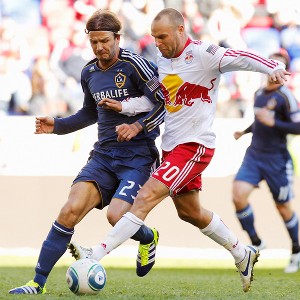 The league says it makes spots in one conference's playoff bracket available to teams from the other to add intrigue to more regular-season games and reward the most deserving teams. It smooths out disparity between the two divisions and bails out good teams with the misfortunate of being in the stronger conference, especially in years when the schedule has been unbalanced. Yet no other sport in the U.S. does this. Baseball's American League has been stronger than the National League for many years, but no crossover has ever happened, except when teams changed leagues. And for good reason: It undermines the conferences' autonomy and calls into question why we have conferences in the first place (see Point 4). In a league with as much parity as MLS, one conference won't always dominate the other, and the imbalance will even out over the long run.

Why couldn't the two wild-card teams from each conference -- FC Dallas and the Colorado Rapids in the West, and the Columbus Crew and New York Red Bulls in the East -- have played each other and then played the regular-season conference champion? It avoids the weirdness of having a conference champion who isn't actually in that conference -- like Colorado in 2010, Real Salt Lake in 2009 and the New York Red Bulls in 2008 -- and it doesn't punish high-seeded teams with grueling trips to the other coast to play wild-card teams, the way Arena's Galaxy had to trek to New York for this year's Western Conference semis. Arena has said he'd like to see regular-season champions (not incidentally like his own team the past two seasons) reap more rewards during the playoffs. Not making conference champions travel unnecessarily would be a good start.

If we abandon crossover there's no need for a wild card, either, since the conferences consist of just one division each.

This year's wild-card games were a bust. I'm not necessarily talking about the games, which weren't great, because that isn't the fault of the league or its format but mere happenstance. I'm talking about attendance. Near-empty stands in Colorado and Dallas -- in spite of the postponement of a World Series game involving the latter's hometown Texas Rangers -- made for sad atmospheres and lame television viewing. This stood in sharp contrast to the conference semifinals and finals, which generated buzz, were played in front of packed stadiums, made front-page news and trended on Twitter, that great measure of modern relevance. 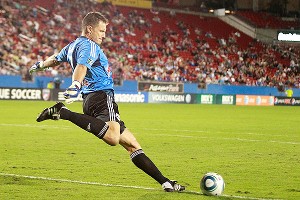 Rick Yeatts/Getty ImagesSparse attendance in Dallas (and in Colorado) made for disappointing wild-card game atmospheres.

It also diluted the regular season's raison d'etre. In 2010, for the first time in league history, there was no majority of the league's teams in the playoffs: eight out of 16. It showed. All entrants were worthy, and that was reflected in the level of play. Ten out of 18 in 2011 was too many. Teams that had no business being in the playoffs weren't long in the hunt anyway, while flagrant underperformers such as the Red Bulls weren't punished. When more than half the teams qualify, you needn't win more than half your games to reach the postseason. The playoffs are fickle enough as it is, but the current system further rewards late-season form rather than consistency. Reduce the number of playoff teams back to eight and you're more likely to see balanced matchups of good, deserving teams.

Granted, the league has the Supporters' Shield to reward the best regular-season record. But most fans probably don't care, or even know, about it. American sports is built around postseason play -- it's where the media attention and fan interest is highest. So it's incumbent on MLS to ensure the playoff format is the best it can be.

3. Play two legs in each round but the final

As stated above, the MLS playoffs are notoriously random. Seldom does the best team of the year come out on top. There's a simple remedy for this: Make every round two legs. Only the MLS Cup final would remain a single game, to ensure that the league's marquee game enjoys the most spectacle, chatter and the best ratings of the postseason.

As demonstrated in the conference semis, a two-leg affair is compelling and tidy, adding the tactical intrigue of having to face a team twice in a short span of time and making adjustments after the first game. This, too, aligns more closely with American style -- playoffs in most other sports have a series of games -- and it is used in most continental club competitions around the world, as well. Yet you retain the drama of an undiluted championship game in the final. This is attractive to team owners, as it guarantees every team a home game in every round until the final.

Doubt that the two-leg system would work in every round of the playoffs until the final? It certainly works for the best-watched club competition in the world, the UEFA Champions League.

4. When the schedule is balanced, scrap the conferences altogether

Considering the fact that the league had an even number of teams and a perfectly balanced schedule -- with each team playing the other once at home and once away -- the conferences were an artificial separation of the teams in 2011. Now, it's understandable that the league kept them, given that it knew it would be adding a 19th team in 2012 and that it is rumored it will return to an unbalanced schedule then, saving on travel and augmenting local rivalries with extra games. That said, the league hopes to add a 20th team by 2013 or soon thereafter.

If it does and subsequently goes back to a balanced schedule, which hasn't yet been decided, there's really no need to keep the conferences. They might feel familiar to Americans, and banishing them might look like pandering to Europe's way of doing things. But ridding MLS of its two divisions would solve a lot of the above problems. If there's no such thing as East and West, you ensure that the best teams qualify, unconstrained by the quality of their conference. Added bonus: It would add four games to the regular season for each team, and national team coach Jurgen Klinsmann has been adamant that the MLS season is too short.

After Sunday's conference finals, two glorious games of soccer and another tantalizing suggestion of all that this league can be, the playoffs went on a two-week hiatus. The mid-November international break is mighty inconvenient to MLS. There are playoffs into the 2012 European championships and two U.S. friendlies, against France on Nov. 11 and Slovenia on Nov. 15. Plenty to distract soccer fans keyed into the MLS playoffs, killing off its momentum. Don't be surprised if, before the MLS Cup final, you hear somebody say, "Oh, the MLS playoffs? That's still going on?"

And that's not to mention that Galaxy designated player Robbie Keane will be away for the crucial preparations for the final to help Ireland try to qualify for Euro 2012.

There's nothing MLS can do about where on the calendar the grand poo-bahs of FIFA decide to schedule their match dates, but it could adjust. By extending the regular-season schedule, as suggested in Point 4, the playoffs could be pushed back until after the mid-November match date. The climate in some playing cities is problematic in the winter, potentially scaring off fans and making fields harder to play on. But a two-week shift shouldn't make it all that bad.

So what does that leave us with? A regular season that can be stretched to 38 games per team, enhanced by as many as seven additional playoff games for the MLS Cup finalists. Those two would have advanced as one of the best four teams in each conference or the best eight in a single table and emerged from two two-leg knockout rounds before reaching the one-game final. A clean, legitimate playoff system, favoring the better regular-season teams and without interruption. Wouldn't that be nice?