PARIS -- As far as the German-born players on the U.S. roster are concerned -- and they're growing in number -- Timothy Chandler was the standout performer for the Americans in Friday's 1-0 loss to France at the Stade de France.

It's one experiment manager Jurgen Klinsmann has tried that's worked.

Such was Chandler's display against Les Bleus that Klinsmann suggested that picking a left back for the squad is no longer an issue. At club level with Nuremberg, Chandler has done his thing at right back.

"I think we have a highly talented player here," Klinsmann said in a news conference after the game. "He's a raw talent. We can develop that one step at a time. He has that starting position. It's his. And he's doing very well in that process." 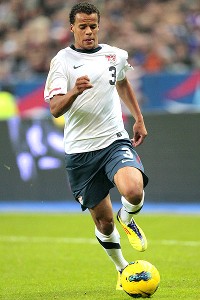 Jacques Demarthon/AFP/Getty ImagesA right fullback with club team Nuremberg, Timothy Chandler has emerged as a solid choice on the left side of defense within Jurgen Klinsmann's setup.

Chandler, possessing the speed of a winger, found himself in dangerous positions more than left-sided midfielder Brek Shea. It's the type of attacking play Klinsmann wants to see.

His only misstep was losing French striker Karim Benzema in the first half, leading to a French chance. Even that could be explained away, as Chandler was crunched in a collision with Mathieu Debuchy seconds earlier and was probably still in a daze.

"He's done really well in a position we feel like, not that it's problematic, but we've changed the players in that position quite a bit," keeper Tim Howard said, gently. "It's nice to see him settle in there and feel comfortable, not only with his one-on-one defending but how he relates to the back line. It's been good for us."

Now for an experiment that didn't work.

Without Landon Donovan, there was a gaping hole on the right side of midfield, and Klinsmann decided to fill it with Danny Williams, known primarily as a defensive midfielder. Williams, not surprisingly, offered little going forward.

Fabian Johnson, part of Germany's triumphant side at the under-21 European championships in 2009, earned his first cap after back injuries ruled him out of friendlies against Honduras and Ecuador in October.

"It's a great opportunity, and here we are," Johnson said.

Johnson replaced Williams on the right in the 71st minute, although it was clear it's not his preferred position.

"I didn't expect to get in on the wing, so it was a little bit new for me," Johnson said, adding that he'd rather play inside than on the wing. 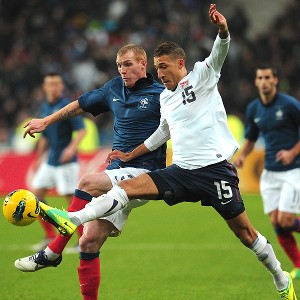 Franck Fife/AFP/Getty ImagesMidfielder Fabian Johnson was among the German-born players seeing time on the pitch for the U.S in the friendly against France.

Jermaine Jones entered for Kyle Beckerman in the second half but a fifth German-born player called up for the friendlies against France and Slovenia, Alfredo Morales, didn't make the subs' bench.

Longer, not shorter: In England, managers habitually complain that their teams play too many games.

But Klinsmann said once again he wants the MLS season to be extended, convinced it will only benefit the national team.

"I understand the circumstances of the league and schedule, and it's fine with me," Klinsmann said in Thursday's news conference. "But I made it clear if a player represents his country, he has to do more. He has to play longer, be in a rhythm for a longer period of time. It's impossible for a national team player to stop for 2½ months and be on vacation. It's just not working."

It's why several U.S. internationals that make their living in the MLS plan to train with clubs in Europe in the coming weeks, including Shea at Arsenal. Backup keeper Bill Hamid just finished a 10-day stint with West Bromwich Albion.

"Who knows, with the expansion of another team in Montreal, and who knows, down the road maybe another team in a couple of years, the season will get longer in the U.S.," Klinsmann said. "We're getting there."

Shea, who thought he didn't play well against France even as French manager Laurent Blanc singled him out for praise, was looking forward to spending time at one of England's elite clubs.

"I'm excited to be able to train at such a high level for a while and see what it's like over there," he said after the game. "I can't wait. Thanks to Arsenal and [Arsenal manager] Arsene Wenger for letting me come."

Does Shea expect to be in Dallas next MLS season?

Blanc's U.S. verdict: U.S. fans probably won't be happy to hear Blanc's assessment of the visitors. He was impressed with the U.S.'s physical game rather than technical ability.

Blanc said in the days leading up to the "match amical," as the French put it, he expected a stiffer test from Belgium -- which beat the U.S. 1-0 in September -- at the Stade de France on Tuesday, and he didn't change his tune.

"My personal opinion is that Belgium has more quality and skills," he said. "We'll see. Maybe I'm wrong."

The gloomy numbers: For those who don't know, here's a reminder: The U.S. has won one of Klinsmann's six games in charge, scoring two goals.

"The record is what it is," said Howard, who limited the damage in the second half. "But we're hoping if the big picture is [World Cup] qualifying and the World Cup, our plan is to get to the World Cup and when we get there, we're going to have a heck of a task. We could play at home against a much lesser opponent and beat them up, but does it serve a purpose other than getting us a win? I don't know."

One from the press room: Staying late at the Stade de France has its perks.

The six journalists covering the U.S. had the entire press working room to themselves in the wee hours of Saturday morning, which meant almost unlimited access to baguettes and beverages. No wine, but no one was complaining.