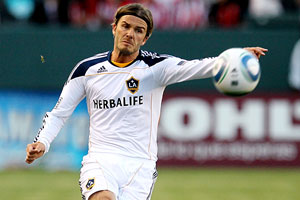 Stephen Dunn/Getty ImagesWhile David Beckham's stint in the MLS has improved the league's image, there is not an abundance of European stars aiming to folllow him to the U.S. league.

It's not easy being Major League Soccer. These days, as it turns the corner and careens towards real, tangible, undisputable cultural relevance, the league labors under dual and irreconcilable pressures. It is expected by some to resemble both a traditional soccer league -- with a single-table format, promotion and relegation and a regular-season champion -- as well as a top-tier American pro league, with playoffs and the economic wherewithal to break even every year. The latter paradigm could also hold that MLS, when out of puberty and fully grown, must have 30 or so franchises.

Why? Because that's how it's done among major leagues in America. Major League Baseball (MLB), the National Basketball Association (NBA) and the National Hockey League (NHL) have 30 franchises. The National Football League (NFL) has 32.

But recently, Major League Soccer commissioner Don Garber and president Mark Abbott each have said publicly that they're not currently looking past a possible New York-bound 20th franchise. In 2012, the league will add its 19th team in Montreal, its eighth addition since 2005. And MLS officials currently see no need nor feel any obligation to make the league swell further. They have conceded there have been talks with Minneapolis, Miami and Las Vegas, but other than adding another club to the New York market, expansion is no longer an imperative or even an objective.

And they're absolutely right.

I state my case (but not necessarily, and probably not, MLS' case) in two broad points:

Central to the notion that MLS can and should expand further is the argument that the country is big enough to support more franchises. This is a fundamental flaw in the expansionist thinking. Such a mindset is justifiable for the NBA, NFL, MLB and NHL chiefly because each is the world's dominant league in its respective sport. As such, the talent pool essentially consists of the entire planet and, most years, there's enough talent to go around for everybody to field a team that might not necessarily be competitive but at least belongs at the level.

MLS doesn't have the near-monopoly on talent that the other four big leagues enjoy. It is hard to quantify exactly where MLS ranks among the world's leagues -- in my view, somewhere between 10th- and 15th-best is probably about right -- because it has unique purchasing power for a league of its size. (In what other third-tier league could teams afford to pay David Beckham and Thierry Henry more than $5 million per year?)

But it is safe to say that MLS doesn't exactly get first, or second, or even third pick of the litter. The league won't be able to attract more talent just because there are more teams. There's a finite number of solid foreign players who happen to be willing to play in the U.S. because they are either out of alternatives or culturally drawn to it. And the talent pool at a national level, while getting better although not measurably bigger, isn't improving fast enough to compensate. Furthermore, serious young American talent is still inclined to forgo college and MLS for a shot with a European club.

If MLS kept expanding, talent would be spread too thin. The level of play has grown at an admirable pace. And only in the past few years have clubs started to develop real depth on their rosters -- as salary-cap limitations and squad sizes were relaxed -- and parlayed that into success in continental play. Overexpansion would put an end to that. By adding more teams, there's a high likelihood MLS would reach that old economic theoretical point of diminishing returns -- you subtract through addition. And in so doing, you reverse the league's positive trends and kill off its momentum.

It has taken MLS 15 years to match and exceed the attendance records it set in its inaugural 1996 season, when it was a novelty of sorts. That year, an average of 17,406 turned up to see 10 teams do battle. This season, MLS surpassed that, averaging 17,872 per game. This is mostly thanks to some very strong and smart expansion, as most of the original clubs lag toward the bottom of the attendance charts.

The five most recent expansion teams (discounting the San Jose Earthquakes, who were reincarnated in 2008 after the original franchise moved to Houston and became the Dynamo in 2006) are all in the league's top seven in average attendance, boosting the originals. Yet, somewhat counterintuitively, this doesn't mean more expansion is a good thing.

For one, the obvious markets now all have a team as professional soccer has failed in traditional soccer hotbeds St. Louis, Atlanta and Florida. That doesn't mean there are no other places that could sustain a strong franchise -- Minneapolis, Las Vegas and Miami have held recent talks with MLS -- but now that the league is at a mature size and footprint, why risk it? 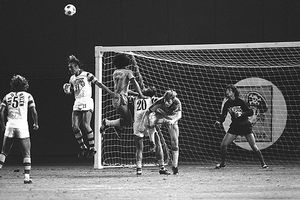 AP Photo/Lenny IgnelziThe expansion of the NASL (seen here in 1979) was the classic case of too much too soon.

The possible merits of further expansion are swiftly muted by the risks it would entail. There is no greater danger for a closed-shop professional sports league than overstretching its reach and oversaturating its market. Each subsequent expansion is more likely to weaken the league -- which already supports several flagging franchises in San Jose, Columbus and New England -- than it is to strengthen it. And why deviate from MLS' successful slow-growth model now?

Between adding the Chicago Fire and the since-contracted Miami Fusion in 1998 and Chivas USA and Real Salt Lake in 2005, MLS went six years without expanding. Since then, it has expanded in seven consecutive years -- eight next year. Why the urgency to keep going? Why not let the dust settle for a decade and see which markets are sustainable long term and which are propped up by hype? Besides, few top-tier leagues around the world have more than 20 teams. And at this size, MLS gives itself the flexibility to go to a single-table format, if it eventually has to cave to FIFA pressures to align with the format used by leagues around the world.

The only American pro league to ever expand past 20 teams in the U.S. was the North American Soccer League in 1978, when it went to 24 for three seasons, having been at just five teams in 1969. (Neither the American Soccer League, in any incarnation, nor the A-league ever exceeded 14 teams.) The NASL, of course, was dead within six years of its peak. MLS is not the NASL. And that's exactly because it has heeded the lessons of the past, and the most important of those is not to overindulge your own success by expanding too quickly or too much.