The real attractions of Euro 2012

With the draw complete and Group of Death (B) and Dearth (A) tags already handed out, it's time to start getting excited for next summer's European Championships. Who will England battle to dour 0-0 results in the early rounds? What drama will befall the proud and stubborn French this time? Can the Dutch soar, or will they crash under the weight of their own expectations? Expected storylines aside, in the grand scheme of international soccer, the Euros are a big deal: UEFA reported that 155 million people watched the 2008 tournament -- Spain's 1-0 final win over Germany was broadcast in a total of 231 countries -- and yet, we don't really watch for the trophy presentation.

The exception, of course, happened in 2004 when Greece, a country so vehemently unfashionable heading into the tournament, took home the cup after one of the most brutally impressive -- though mind-numbingly difficult to watch -- displays of defensive soccer in history.

But enough about the Galanolefki; instead, it's the marginalia that really lodges in the brain: Henrik Larsson's diving header against Bulgaria in 2004, Antonin Panenka's glorious, Totti-and-Zidane-repeated penalty-spot chip in 1976, or the Danish Dynamite of the 1980s to name four such Euros-specific moments. (A decent World Cup example? The inebriated plane ride for La Furia Roja after the 2010 World Cup, led by Pepe Reina and Sergio Ramos.)

And so, with all the above in mind, we'll ignore early chatter of champions, dark horses and winners to focus on those indelible Euro 2012 moments that will illuminate our senses -- and, obviously, Twitter -- more than any golazo, rabona, frango or WAG.

Please, can Germany and Spain meet again in the final?

Tournaments rarely run true to long-standing form, with timely hot streaks resulting in plenty of upsets and underdog triumphs -- aka virtually every MLB postseason since 2001, Uruguay's run in the 2010 World Cup and the damn 2004 Greeks to name just a few. But in 2012, I'm craving a competition in which the two best teams in Europe not only avoid getting drawn in the same group, but fall on either side of the bracket and rampage through the other 14 teams to give us a tasty rematch of the Euro 2008 final. Thankfully, the draw kept them apart, pitting Germany in Group B and Spain in Group C, though if either fails to top its hand-picked quartets, the sides will run into each other in the semis. Given the pedigree on both squads, it's unlikely … right?

ESPN.com Topics has all the information you need on the UEFA European championship -- including an extensive look at the event's history and format, listings of past winners, 2012 venues and qualifying results, and the latest video/audio links relating to the continental competition. Full Profile »

And so, prayer rituals to ensure safe, successful passage for both Die Mannschaft and La Furia Roja are well underway in the hopes of getting what it feels like we haven't had for some time in soccer: a really memorable showpiece final. Most Champions League finals are cagey, counterpunching affairs, while the 2010 World Cup final was only really notable for the thuggish Dutch, Howard Webb's ineptitude and Andres Iniesta's T-shirt tribute, so a seismic battle of Mesut Ozil versus the inimitable Xavi is a dream of dreams for soccer nerds like me everywhere.

Though the Spanish have been wildly off-color in their recent exhibition games -- graciously allowing the English a tepid 1-0 win at Wembley and spotting the Costa Ricans a two-goal head-start before salvaging a 2-2 draw are the most recent lowlights -- they're still the reigning Euro and World champs and as such remain favorites until they're knocked off.

Meanwhile, the Germans, with dapper Joachim Low at the helm and an array of bright, young and lethal counterattacking tyros (and ageless goal poacher Miroslav Klose) at their disposal, are a much stronger match in 2012 than they were in '08, when a grim Michael Ballack-led side could muster only four shots on goal in that 1-0 final defeat.

England players with autobiographies will get their best material

A key element in being a Three Lions squad member is that you never approach a major international tournament without having a book ready. If you win -- let's face it, not happening -- you're blessed with a fairytale ending. If you lose, you're giving the fans plenty of behind-the-scenes drama and insight as to what went wrong both on and off the field. Guaranteed sales and elated publishers either way. And England may be feeling bullish about its draw in Group D against Ukraine, Sweden and France. But first things first.

Tournament and dressing-room gossip forms an essential third act, something Joey Barton sarcastically pointed out when Frank Lampard & Co. came home empty-handed after the 2006 World Cup and his memoir "Totally Frank" was fighting for shelf space with Ashley Cole's insipid "My Defence" (buy it now for $1.76!) and Wayne Rooney's "My Story So Far." Barton's response to the flood was typically brilliant: "England did nothing in that World Cup, so why were they bringing books out? We got beat in the quarterfinals. I played like %#@!. Here's my book."

Last summer's dearth of tepid "tell-all" memoirs following England's monumental failure in South Africa suggests that the English superstars are learning restraint and self-awareness, but I wouldn't be surprised if the two years since -- not to mention the Three Lions' impending implosion -- will supply ample fodder for yet more bland, sorry-we-screwed-up memoirs. Especially if they screw up a seemingly soft draw against a still-rebuilding France, co-host Ukraine and a Sweden side they bested 1-0 a couple of weeks ago. 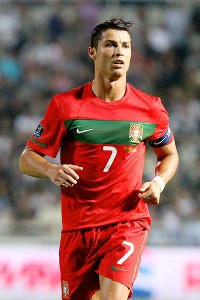 Talar Kalajian/Getty ImagesCristiano Ronaldo will command the spotlight at Euro 2012, but the same can't be said of Portugal.

Consider the 2010-11 season put together by Cristiano Ronaldo: the Portuguese prodigy scored 53 goals in 49 games for Real Madrid, a Copa del Rey victory over Barcelona and the kind of form that should steal some of Lionel Messi's headlines. (Though largely, he inexplicably remains in the tiny Argentine's shadow.)

However, the Euros next summer give C-Ron full command of the spotlight -- not that he will have any delusions about actually lifting the trophy on July 1, especially given that Portugal finds itself in Group B with Netherlands (in a nasty rematch of the Battle of Nuremberg in the 2006 World Cup), Denmark and Germany.

It's been nearly a full footy generation since Portugal finished runners-up in 2004 to the obdurate Greeks, beating Spain, England and Holland along the way. But in qualifying for 2012, A Seleccao das Quinas were more Wigan-esque than world-beaters: an 89th minute equalizer doomed them to a humiliating 4-4 home draw to lowly Cyprus in Round 1, followed by a 1-0 defeat in Norway and a 2-1 defeat in Denmark in their final group game that forced them into that tense playoff home-and-away doubleheader against Bosnia & Herzegovina.

Though Portugal ultimately skipped past the Edin Dzeko-led Dragons with a 6-2 win in Lisbon, success in Poland and Ukraine is far from assured. If it's not the inconsistency of the team's back line -- as good as Fabio Coentrao and Pepe are, they could have used seasoned defenders Jose Bosingwa and Ricardo Carvalho, both of whom retired from international football and refuse to return until current boss Paulo Bento leaves -- it's the endless drama that can surround the likes of Ronaldo and Nani, who can be as self-destructive as they can be game-changingly brilliant.

Bookies William Hill have Portugal firmly in the middle of the pack at 16-to-1, but you can bet the house on some frustrating, manic moment derailing its fortunes long before the final. 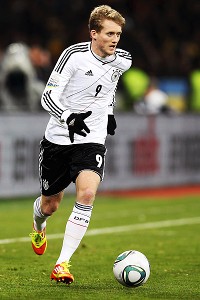 The next generation of all-world talent

Do I pick Germany's next big striker, Andre Schurrle, who scored 15 for Mainz last season and has managed five goals in 11 games for the national team since making his debut? Or his teammate Mario Gotze, the uber-talented, surely-coveted-by-Sheikh-Mansour attacking midfielder currently starring as the creative fulcrum for Borussia Dortmund? (Fun fact to make us all feel old: When Gotze and Schurrle made their debuts in November 2010, they became the first players born after reunification to rep the German NT.)

While most headlines will be dominated by the elder statesmen -- the Lampards, Villas and Riberys -- there will be plenty of limelight to spare for those names and faces that'll dominate the game for much of the next decade, which feeds neatly into our final point …

Players who can parlay a big tournament into a bigger payday

The Euros are a wonderful breeding ground for hype, especially now that the Internet can take any grainy YouTube video showing a handful of goals and some shaky-cam dribbling skills to whip transfer rumor mills into a frenzy. It wasn't always like this; in the pre-Internet age, scouts actually had to watch the games, but the captive, soccer-starved summer audience for the European Championships means that those under-the-radar gems can turn a few brilliant games into a rich new contract at a top-tier club.

Karel Poborsky was largely unknown heading into Euro 1996, but his incandescent on-the-ball trickery propelled a stubborn, stodgy Czech team all the way to the final, besting Italy, Portugal and France on penalties along the way. (The highlight? His sexy dribble-and-lob against the Portuguese in a 1-0 win.) It's all but a footnote to Poborsky's tale that his side lost 2-1 to Germany, because his ticket was soon punched to Old Trafford, and off he went. (He lasted only 18 months with United, marginalized as David Beckham broke into the first team, but the wily Czech did manage a Prem winner's medal in 1996-97 before moving to Benfica in January 1998.)

El-Hadji Diouf did it at the 2002 World Cup, parlaying a run of form with the mighty Senegal into disappointing stints with Liverpool, Bolton, Sunderland and Blackburn, and then at the 2008 Euros, little Andrei Arshavin spearheaded the Russian side's rapid-fire evisceration of the much-favored Dutch (who'd stomped Italy and France in the group stages to set up their quarterfinal humiliation nicely) and became Arsene Wenger's Magic Russian Pixie the following January.

These players were obviously known to the soccer community, but the Euros undoubtedly pushed each of them further into the mainstream and foisted upon them the kind of attention normally reserved for Hollywood divas or heads of state.

Who will it be this summer?

James Tyler is a freelance writer who has worked for ESPN The Magazine. He was the founder and editor of Unprofessional Foul, and has written for Run of Play and Time magazine. He can be found on Twitter at @UFJamesT.