SAO PAULO -- On and off the field, former Brazil star Socrates stood out above the rest.

His elegant style and his deep involvement with politics made him a unique figure in Brazilian soccer, setting him apart from the players of his time and even of today.

He was mostly known for captaining Brazil at the 1982 World Cup, regarded by many as the best team ever not to win football's showcase tournament.

But he also was widely known for his heavy drinking, which he publicly admitted caused the health problems which eventually helped lead to his death on Sunday. 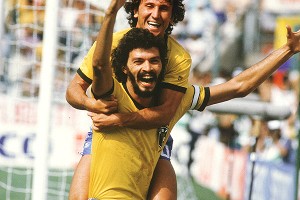 Bongarts/Getty ImagesSocrates had been rushed to the hospital on Saturday -- the third time in four months -- and had been in critical condition in an intensive care unit with an intestinal infection.

The Albert Einstein hospital said in a statement that Socrates died of septic shock at 4:30 a.m. Brazilian time. He was 57.

Brazilian President Dilma Rousseff said Brazil lost "one of its most cherished sons."

"On the field, with his talent and sophisticated touches, he was a genius," she said in a statement. "Off the field, ... he was active politically, concerned with his people and his country."

"Socrates' generous contribution to Corinthians, to football and to the Brazilian society will never be forgotten," said Silva, an outspoken fan of Corinthians, the club where Socrates thrived in the 1980s.

Socrates had been rushed to the hospital a few days ago and had been in critical condition in an intensive care unit with an intestinal infection. He was breathing with the help of a ventilator.

It was the third time in four months that he was hospitalized and placed in intensive care, most recently in September. The first two times he was admitted for a hemorrhage caused by high pressure in the vein that carries blood from the digestive system to the liver.

Socrates never denied his fondness for drinking from the time he was a player in the 1980s, but said he stopped drinking earlier this year after his stints in the hospital.

"Socrates seemed like a player from another era," former Italy forward Paolo Rossi told the ANSA news agency. "You couldn't place him in any category -- on the pitch and even more so off it. Everyone knew about his degree in medicine and he had a lot of cultural and social interests as well. He was unique from every point of view."

Indeed, Socrates was like no other on and off the field. He became a doctor after retiring from football and later became a popular TV commentator and columnist, always with unique and controversial opinions.

Since his playing days, Socrates never kept his political ideas to himself and often wrote about the subject in his columns. Known as Dr. Socrates because of his practice of medicine, he was constantly in demand from local media for interviews on varied subjects.

While with Corinthians, Socrates spearheaded a movement called the Corinthians Democracy, in which players protested against the long periods of confinement required by the club before matches. It quickly became a broader protest that coincided with Brazil's fight to overturn a military regime in the 1980s.

The clever, tall full-bearded playmaker also was a member of the Brazilian squad in 1986 in Mexico, but it was in 1982 in Spain that he made history with Brazil, which is known to have had one of the greatest teams in World Cup history but failed to win the trophy. With players like Zico and Falcao, it fell to Italy 3-2 in the second round despite needing only a draw to advance to the semifinals.

"He was a very dynamic player with a sublime foot but most of all great intelligence," added Rossi, who scored a memorable hat trick in that match against Brazil. "Along with Zico and Falcao he was the symbol of that Brazil squad.

Zico said he was honored to have been Socrates' friend and teammate.

"He was a spectacular guy," Zico told the website GloboEsporte.com. "As a player, there is not much to say, he was one of the best that I ever played with. His intelligence was unique, you always expected something good out of him."

Dozens of Brazilian footballers expressed their sadness on Twitter moments after Socrates' death was announced.

Former Brazil and Barcelona playmaker Rivaldo added on his Twitter page: "Sad to wake up and find out that Socrates has died."

Reaction came from those outside of football, too, including three-time French Open champion Gustavo Kuerten and three-time Indy 500 winner Helio Castroneves.

"Great guy," Castroneves tweeted. "A Brazilian who will be greatly missed."

The Brazilian football federation said the final round of the Brazilian league on Sunday will be played in Socrates' honor. All matches will be preceded by a minute of silence. Corinthians, the team that featured Socrates at the height of his career, needs a draw against rival Palmeiras to win the title. Corinthians' main fan group said it will honor its former star throughout the day.

Fiorentina, another of Socrates' former clubs, held a minute of silence and players wore black armbands in his honor in Sunday's Italian league match with Roma.

Socrates wrote a series of columns for The Associated Press during the 2011 Copa America in Argentina, expressing his views on all aspects of the tournament, including economic and political issues in Latin America.

"It's not just about the game itself," Socrates said before the competition began. "Before anything, (football) is a psychological battle, the human aspect plays a significant role."

Socrates was included in FIFA's list of the best 125 living soccer players in the world, a list compiled by countryman Pele. Socrates played 63 matches with the national team, scoring 25 goals.

He was known for his great vision on the field. Always clever with the ball at his feet, his trademark move was the back-heel pass, and he set up and scored many goals with it throughout his career.

Socrates briefly coached and played for Garforth Town in England in 2004.

Socrates' younger brother Rai was another great Brazilian midfielder, and he helped Brazil win the 1994 World Cup in the United States.

Funeral services will take place in his home town of Ribeirao Preto, in the interior of Sao Paulo state.

He is survived by his wife and six children.