MLSers flock to Europe for training 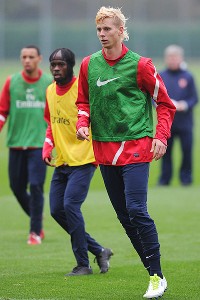 It is said that a major hindrance to the proper development of the American soccer player is a dearth of quality repetitions. It's a school of thought that's gaining in popularity on the stateside soccer scene, spearheaded by U.S. national team head coach Jurgen Klinsmann. High school and college seasons are famously short. A greater issue still is Major League Soccer, which ought to be the primary breeding ground for future national-teamers. According to Klinsmann, the MLS season isn't long enough either. At best, a league player practices and plays from January or February through November.

Klinsmann's stance on such a lengthy break was quite clear when he spoke in October. "If you have a seven-, eight-month season, that's not competitive with the rest of the world. If there's a national team player, he has to do extra work," he said. "He has to do extra weeks, and he can't go on vacation even if he says, 'Well, but I'm supposed now to have six weeks off.' If he comes and says that, then I give him a hug and say, 'Have fun the six weeks, but don't come back here.'"

In the first MLS offseason since Klinsmann took over the national team program in July and embarked on his wide-ranging reform initiative, no fewer than 15 MLS players -- all of them in the senior, U-23, U-20 or U-18 national team picture -- have gone or are going on training stints with elite clubs in England and Germany.

There are many benefits to going over for a few winter weeks. "It's a different kind of coaching they get over there. Things are done a little bit differently," said Diego Gutierrez, head of scouting and player development of the Philadelphia Union, which has three players training in Europe. "It enhances the players' flexibility for learning, exposes them to different situations, different cultures, which is going to help them down the road."

"Some of our young guys who have aspirations and have the talent to go abroad and play eventually, it's good for them to get a look at how professionally these clubs run and how their young players act and play," echoed Ben Olsen, head coach of D.C. United, which also has three players abroad.

Players across the pond

MLS players on loan or training in Europe this offseason:

* Najar is currently registered to Honduras but could be eligible to play for the U.S. in the future if he made a onetime switch.

Klinsmann personally brokered the training stints of five of the players, including that of FC Dallas winger and U.S. revelation Brek Shea, who was practicing with Arsenal. "A player like Brek has tremendous potential, but it's a raw talent," he told ESPN The Magazine last month. "He needs a lot of guidance, a lot of attention. I worked with [Arsenal manager Arsene] Wenger for two years in Monaco, and he's a coach who sees all those elements."

The intent, in addition to quality reps, is total immersion. "It's not only the training and matches," Klinsmann said. "Soccer is your life. People live for the game in Europe. There is no escape."

Coaches hope this will re-energize and motivate their players to strive for a career that will land them in a culture dominated by soccer. Indeed, New York Red Bulls and U.S. striker Juan Agudelo told USSoccer.com that his training stint had "inspired" him.

But if Klinsmann has brought attention and urgency to the emerging winter trek to Europe, it was a movement already brewing. "Really, we didn't rely our decision on sending our guys on Jurgen's initiative," Gutierrez said. "More and more MLS clubs are starting to realize that in order to develop your young players they need to keep playing. If you're young you really don't need the rest as much as the veteran guys, especially if the training conditions are very, very good. For us it was an easy decision as part of development." Union goalkeeper Zac McMath and midfielder Zach Pfeffer, currently training with Everton and Hoffenheim, respectively, were with those same teams last offseason too. The New York Red Bulls started getting requests from European clubs for Agudelo and defender Tim Ream to come train with them long before Klinsmann took charge of the U.S., according to NYRB technical director Erik Soler.

The scheme has its critics, too. Bruce Arena, coach of the 2011 MLS Cup-winning Los Angeles Galaxy, argues that the MLS season is long and tiring enough as it is. "One big difference between our league and playing in Europe is the heat and the travel, the distances," he told the Prost Amerika blog. "So you're comparing apples to oranges, and I think probably over time, [Klinsmann] will probably understand that." Arena added that at European clubs, American guests often aren't taken seriously and made to train with reserve or academy teams. 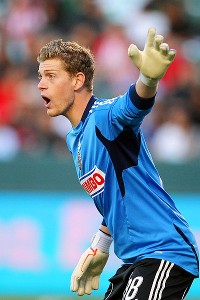 None of the current MLS players over in Europe have said that they were marginalized or only trained with reserves or youth teams, however. Training with lower teams occurs, but only when necessitated by upcoming games or road trips. "It doesn't make sense to send the guys overseas and not have them exposed to the best guys they have at that club," Gutierrez said. "So most of the time, yes, they are with the first team."

A question that remains, however, is whether MLS risks draining itself of talent by shoving its best prospects under the noses of rich European clubs. "I specifically made a point to both of the clubs that we are not selling and are building on them for the future," Soler said. "They're not going on trial or for us to sell them; if they're going to learn and stay fit then it was good for us."

Perhaps that's naive. "People can, until they're blue in the face, say these things are just training exercises, but any opportunity these guys have in Europe is an opportunity to showcase themselves," said Chris Megaloudis, an agent for James Grant Sports who represents Andy Najar, Bill Hamid and Omar Salgado, all of whom are in Europe. "Every country in the world is becoming more aware of MLS, so for them it's an opportunity to assess the top 5 percent of players in this league. It's a free look at these guys to bring them in and compare them to what you have. For everybody involved it's a win-win situation."

Except for MLS, perhaps. But ultimately, whether training stints turn into transfers or remain just that, the U.S. national team -- the greater good in all this -- is likely to benefit. And that's all Klinsmann could ask for.