It's the middle of December, and the winter transfer window opens soon. Stewart, as always, craves information. These days, the 42-year-old former midfielder -- who played in 101 games (17 goals) and three World Cups ('94, '98 and '02) for the United States -- is technical director of Dutch Eredivisie leader AZ Alkmaar, putting him in charge of the club's coaching, medical and scouting staffs, youth development and, crucially, transfer dealings.

A rising front-office star, Stewart has had astonishing success in his second career, arguably eclipsing his playing career. "It's weird how things sometimes pan out," said Stewart, resting his elbows on a desk after welcoming me into his office in AZ's AFAS Stadion. 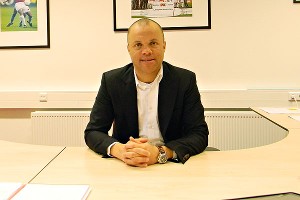 It's been almost seven years since Stewart gave in to his aching right knee. The cartilage had worn down, bone crunching directly on bone. It hurt to walk. (It still does. "As a player, I said that after my career the first day I wake up without pain I'll throw a party, and I still haven't thrown one," Stewart said.) He was almost 36, a few months removed from winning the 2004 MLS Cup with D.C. United and six games into his return to VVV-Venlo, the second-tier Dutch club where he'd come up as a teenager.

The son of an American serviceman and a Dutch mother, Stewart was born in the Netherlands and had grown up in the southeastern Dutch province of Limburg, wedged between Belgium and Germany. After leaving VVV, his professional career would take him to Dutch first-tier Eredivisie clubs Willem II and NAC, span 17 years and 484 league appearances -- with 119 goals -- in all. He had signed an 18-month contract with VVV, which stipulated that he would work in the youth academy after he retired. But when Stewart hung up his boots prematurely, VVV offered him the technical director job instead. "It caught me by surprise," Stewart said. He worried that he wasn't cut out for giving people bad news, that he wouldn't be able to sleep at night.

VVV had no such doubts. "We saw management qualities in Earnest," said VVV general director Marco Boogers. "And thought he'd be able to foster a close relationship with the players."

Stewart took the job. The next season, 2005-06, VVV had its best season in a dozen years, placing second, thanks in part to Stewart's savvy pickups and management. "He did really well, had a big share in our success," Boogers said. "He learned a lot and made sure the players clicked with the coach."

After a year, Stewart was snapped up by NAC, where he'd spent his eight best seasons as a player. The team had placed 16th the year before in the Eredivisie and narrowly avoided relegation in the playoffs. Stewart set about rebuilding NAC, which was accustomed to being a midtable team. He recruited from the lower division and from the big clubs' reserve teams, picking up their unappreciated younger players and sidetracked veterans for free or next to nothing. Under Stewart, NAC would finish 11th, third (its highest finish since 1956), sixth and, after serious budget cuts, 10th.

Ahead of the 2010-11 season, AZ put Stewart atop its list of candidates for its technical director vacancy. "He reacted like a true American when I reached out," AZ general director Toon Gerbrands said. "He said he was proud and honored that a club like AZ would call him. We're not used to that sort of reaction in the Netherlands."

Stewart accepted, leaving NAC behind in far better shape than he had found it. "The stadium was packed, and when he arrived, that wasn't the case," said Jeffrey van As, Stewart's head scout and now his successor. 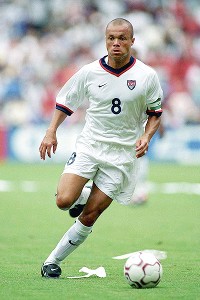 At AZ, Stewart walked into yet another challenging situation. The club's chairman and sugar daddy Dirk Scheringa -- who in 15 years had lifted it from the second-tier mediocrity to the national championship -- had been wiped out in the financial crisis, leaving the club insolvent. Its annual budget had to be scaled back from 40 million euros a year to 25 million euros, while the more valuable and high-earning players had to be sold. That summer, Stewart dealt four starters, including the Fulham-bound Moussa Dembele. But with a few shrewd signings, AZ placed fourth. Before the 2011-12 season, Stewart sold four more starters and brought on cheaper replacements, including U.S. striker Jozy Altidore, reportedly signed on a free transfer from Villarreal (which had paid MLS $10 million for him three years earlier).

Yet AZ sits in first place in the Eredivisie. "A year and a half ago, nobody would have dared to dream that we'd be at the top of the Netherlands now," Gerbrands said, crediting Stewart. "I think he played a very big part in that. We gave him the whole picture and told him that of our transfer earnings we'd only be able to put a quarter back into the squad, and that we'd have to be smart about it and spend on the right positions. We've succeeded amazingly at that, and he had a big part in it. The right purchases were made at the right positions."

Stewart's speedy ascent is the fruit of considerable labor. Stalking in the shadows, working inconspicuously and unobtrusively -- "You don't want to have your face in the paper every single day, it's not good," he explained -- Stewart puts in 70-hour work weeks. He developed a network, scouts almost every day and informs himself obsessively on the players on the market. "I need information," Stewart said. "I want to call everywhere, and I want to make sure we're up to speed on players -- where does he live, what does he do, what are his ambitions."

Stewart has what he calls a "shadow team," a short list of six or so players at every position whom the club will pursue if for whatever reason it loses a regular -- a frequent occurrence in the high-turnover Eredivisie.

"He's good at analyzing what a team needs," van As said, "what type of players do and don't fit into the club."

"I think I've become accustomed to what a team needs," Stewart said. "All those pieces in the puzzle, they have to fit. It begins on the technical side, but they're personality pieces, too. In the end, putting those pieces together, that's one of the things -- not to sound stupid -- but that I've always been pretty good at."

Recently, Stewart took AZ's front office and board to see "Moneyball." Outside-the-box thinking appeals to him. Everywhere he has worked, he operated on a budget that, relative to the club's direct competitors, was very tight. "You learn to be creative. You learn what's important for a team and club," Stewart said. "I've learned a lot at a smaller club, and then a bigger club and now a very big club in Holland." He puts strict spending caps on himself and has never spent more than 1.5 million euros on a transfer, a pittance for a club competing for the Dutch title every year.

"We don't have the budget that Ajax has, we don't have the budget that PSV has," Stewart said. "That means we have to look at football in a different kind of way. We think that the concept of how the [Oakland Athletics] thought [as described in "Moneyball"] -- it's possible to relate that to soccer." The A's philosophy was to pin down how games are won and pursue players who fit that mold but were irrationally undervalued by their competitors. Similarly, AZ tries to quantify the physical demands of pro soccer, broken down by position, and ascribe value to those different qualities. "We try to figure what is the AZ goalie of the future and what is the AZ forward of the future," Stewart said.

Making the most of your budget means empowering people to thrive. They have to be happy and get along. This was a realization Stewart arrived at as a player. "I always tried to make sure our locker room was one," he said. He still takes on that responsibility and is widely liked, forming a bridge between factions. At AZ, he has hired a team manager, who ensures players' lives are in order off the field. 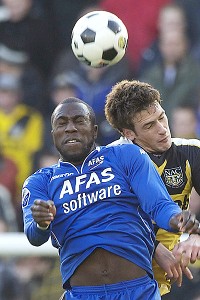 VI Images/Getty ImagesJozy Altidore has been one of Stewart's impact signings.

On the pitch, Stewart has a strong partner in his coach, Gertjan Verbeek. "I hire or buy the players, and the coach makes them better," Stewart said. "That's how it's set out." Verbeek has a strong record of developing players, including U.S. midfielder Michael Bradley at Heerenveen. He is a demanding coach bent on conditioning and individual improvement. Like Stewart, he has a background in physical education.

They share an even-handedness. "The most important thing is that you have a philosophy and that you keep following the same path," Stewart said. "And that's one of the most difficult things to do in soccer. Because the emotions of the day get a grasp on what happens. If you lose four or five games in a row, does that mean you have a bad coach? I don't think so. And if you win five or six games in a row, it doesn't mean you have a great coach. It has nothing to do with it. Obviously, getting results is also good, but the main process is making your players better every single day that you step onto the field."

As part of that process, Verbeek has developed intricate training methods, and Stewart has hired him assistant coaches to be able to work with each player individually. Every player has tailored drills on the practice field and a personal fitness and strength program. "Within 90 minutes, every player, when we add it all up, has the ball two minutes, three minutes -- a good player maybe four minutes," Stewart said. "That means he has to do 85 minutes of running, so that obviously means you have to be fit."

Put together, AZ plays a dominant, attacking, ultra-Dutch 4-3-3 with one of the fittest squads around.

If AZ maintains its lead until the end of the season, Stewart might have nothing else to achieve in the Netherlands. But he isn't one for career planning and plotting out future moves. He does, however, have something on his professional bucket list. "One ambition I do have is to go back to the United States and to be of importance to soccer," he said. "It's not an ambition I want to do next year or in two or three or four years, but at some point that's something I would like to do." At that point, Stewart probably won't become a general manager in Major League Soccer. He's put off by the constraints, quirks and parity mechanisms that allow others to reap the benefits of your own work. More likely, he'll take an executive job somewhere.

We say goodbye. I wish him luck for AZ's Dutch Cup round-of-16 bout with Ajax that night. In the 37th minute of that game, which took place on December 21, an Ajax fan -- who acquired a ticket in spite of his three-year stadium ban -- runs onto the field and tries to land a karate kick on AZ goalkeeper Esteban Alvarado, who parries and kicks the grounded fan several times. Referee Bas Nijhuis shows him the red card (later voided by the Dutch football association's prosecutor) and Verbeek pulls his side off the field. They decide to quit the game with Ajax ahead 1-0. (The game will be replayed in its entirety, with Alvarado, on Jan. 19 in an empty Ajax stadium.)

Stewart, against his own policy, appears on television to explain. "The players are sitting in the locker room, broken," he said. "They don't feel safe. And then it's not up to the club to send them out there."

That's all there was to it. Stewart trusts his people, trusts the process. Unremarkable guidelines for a remarkable second life in soccer.