LONDON -- Clint Dempsey scored the first hat trick of his career, Brad Guzan saved a penalty and Landon Donovan had an assist on a successful day for Americans in the third round of the FA Cup on Saturday.

Dempsey made it 12 goals for the season by scoring in the eighth and 61st minutes, then converting a penalty kick in the 81st of Fulham's 4-0 win over Charlton, which is top of the third tier in English soccer.

"This game is a roller coaster. Stay strapped in for them ups and downs," Dempsey wrote on Twitter. "But I did put that biscuit in the basket a few times today." 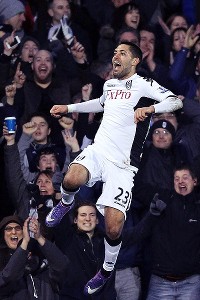 It is believed to be just the third hat trick by an American in a competitive league or FA Cup match for an English club, following John Kerr Jr. for Millwall against Derby in a second-tier league match in August 1994 and Chris Cleary for Worksop against Droylsden in the third qualifying round of the FA Cup in October 2004. There have been additional ones in lesser competitions such as Conference play, the FA Trophy and the League Trophy.

Brad Guzan, still Aston Villa's fill-in at goalkeeper in the absence of the injured Shay Given, saved a stoppage-time penalty from Scott McGleish to help the Premier League team beat Bristol Rovers 3-1 away.

Donovan assisted Johnny Heitinga's fifth-minute goal with a corner and hit the post in the 85th for Everton in its 2-0 win over Tamworth, one of three nonleague teams to be eliminated on Saturday. Donovan was playing his second game in his loan spell at the Liverpool club.

Elsewhere, Blackburn and Wigan -- the Premier League's bottom two clubs -- were the big casualties as world soccer's oldest knockout competition threw up a typically mixed bag of results in the third round.

Argentine midfielder Jonas Gutierrez scored the winner in the fifth minute of stoppage time as Newcastle snatched a 2-1 victory over Blackburn in one of the round's two all-Premier League matches.

"My lads deserve something from the club -- maybe just a small plaque with all their names because they did something special," Di Canio said.

It wasn't all smooth sailing for the rest of the Premier League teams either.

Queens Park Rangers required a last-minute equalizer by Heidar Helguson to secure a 1-1 draw and a replay against third-tier MK Dons while David Wheater's 77th-minute header earned Bolton a 2-2 draw at Macclesfield, which plays in England's fourth division.

Tottenham, which is third in the Premier League, avoided what would have been the mightiest upset by easing past fourth-tier Cheltenham 3-0 thanks to goals by attacking trio Jermain Defoe, Roman Pavlyuchenko and Giovani dos Santos.

Premier League teams Aston Villa, Stoke, West Brom and Norwich also progressed, Liverpool beat Oldham 5-1 on Friday, while the match of the round coming on Sunday when Manchester City and Manchester United -- the Premier League's top two teams -- meeting in a derby at Etihad Stadium.

Racing Santander extended its turnaround since the departure of coach Hector Cuper with a 1-0 win over last-place Zaragoza in the Spanish league on Saturday.

Santander's unbeaten streak became four games under the caretaker coaching trio of Juan Jose Gonzalez, Fede Castanos and Pablo Pinillos, helping the team move out of the drop zone for the first time in 12 weeks.

Defender Bernardo Espinosa scored in first-half added time when he sent Papakouly Diop's corner past goalkeeper Roberto Jimenez with a glancing header at the near post.

Substitute Edu Oriol hit the crossbar with a shot from outside the area in Zaragoza's best chance to pull even in the 89th.

On Sunday, second-place Barcelona visits Espanyol in a Catalan capital derby, while Jose Antonio Reyes could debut in his return to Sevilla at Rayo Vallecano.

Also, it's: Getafe vs. Athletic Bilbao, Villarreal vs. Valencia and Real Betis vs. Sporting Gijon.

MILAN -- Inter Milan started the new year with a 5-0 victory over Parma in Serie A for its fifth straight win.

Diego Milito scored in the 13th and 41st minutes and Thiago Motta in the 18th as Inter built a three-goal lead. Giampaolo Pazzini added a fourth in the 56th minute before Marco Faraoni got his first Serie A goal in the 79th.

Juventus (9-0-7), tied atop the standings with Milan at 34 points, plays Lecce on Sunday.

In Saturday's other game, Siena beat visiting Lazio 4-0 for its first win since October. Mattia Destro put Siena ahead in the 11th minute, Emanuele Calaio converted penalty kicks in the 35th and 45th, the latter after Lazio goalkeeper Albano Bizzarri was ejected. Destro scored again in the 81st.

AEK moved to second in the Greek league with a 2-0 away victory over newcomer Levadiakos on Saturday.

Dimitris Sialmas scored once in each half and got sent off. He was booked after his first goal for excessive celebration, and received another yellow card in the 82nd minute for a dangerous challenge.

AEK was four points behind Olympiakos and two ahead of Panathinaikos, which has played three fewer games. Olympiakos travels to last-place Drama and Panathinaikos hosts Kerkyra on Sunday.

Copyright 2012 by The Associated Press