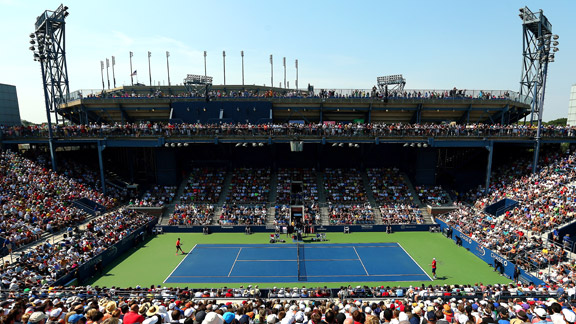 The U.S. Open is the final Grand Slam tournament of each season, held in late August and early September at the USTA Billie Jean King National Tennis Center in Flushing Meadows, N.Y. Having originated in 1881 as the United States National Championship -- a men's-only event -- the tournament now consists of championships in men's and women's singles, as well as men's, women's and mixed doubles. It also hosts junior, senior and wheelchair divisions.

Currently held on hard courts, the U.S. Open had been played on grass and clay surfaces prior to the event's move to the USTA National Tennis Center (in 1978). In men's and women's singles at the U.S. Open, the final set is determined by a tiebreaker if it reaches six games all. That differs from the other three Grand Slam events in which the deciding set continues on indefinitely until a two-game lead is reached.

The inaugural U. S. Open was held in 1881 in Newport, R.I. That year, only men's singles was featured, with Richard Sears capturing the championship after a 6-0, 6-3, 6-2 victory over William Glyn in the finals.

Throughout its early years, the U. S. Open men's championship was dominated by several players. Oliver Campbell won three straight competitions from 1890 to 1892. Malcolm Whitman won it from 1898 to 1900. William Larned won five titles in a row from 1907 to 1911, while "Big Bill" Tilden -- one of the first American superstars in the sport -- won six straight from 1920 to 1925.

Molla Bjurstedt of Norway captured four straight women's championships from 1915 to 1918. Helen Wills won six times in a seven-year span from 1923 to 1929, and Helen Jacobs claimed four straight during the 1930s.

The 1930s also saw Fred Perry and Don Budge emerge as international stars, and the two combined to win five of six U.S. men's singles titles between 1933 and 1938. The two met in the 1936 final, an epic match won by Perry after a 10-8 fifth set. That year marked the last time a British man has won the U.S. Open.

American players proved dominant in the following decade, with Frank Parker, Jack Kramer and Pancho Gonzalez each winning two men's titles during the 1940s. U.S. women won each year between 1938 and 1958, with Pauline Betz winning four times in that period and Margaret Osbourne-Dupont and Maureen Connolly taking three titles each.

Australians came into prominence in the sport and at the U.S. open during the 1960s. Neale Fraser, Roy Emerson and Rod Laver won multiple men's titles in that decade, while Margaret Smith Court claimed four women's trophies.

The start of the Open era of tennis in 1968 provided a couple of major surprises at the U.S. Open that year, when all championship divisions were played together at Forest Hills in New York. Arthur Ashe won the men's singles crown -- the first time it was officially termed the "U.S. Open" -- defeating Tom Okker of the Netherlands in the final, 14-12, 5-7, 6-3, 3-6, 6-3. Because of his amateur status, the 25-year-old Ashe, a lieutenant in the U.S. Army, was ineligible to receive the $14,000 first prize in the $100,000 event. (At the time, the Open was the richest tournament in tennis history.) Instead, Ashe received his $20 per diem. Ashe was the first American to win the U.S. men's singles title since 1955 and the first-ever African-American to win a men's singles title at a Grand Slam Championship.

The women's tournament in 1968 also saw a shocker as Britain's Virginia Wade won the title, upsetting top-seed and heavy favorite Billie Jean King. King would rebound by winning three of four U.S. Open crowns between 1971 and 1974. Chris Evert then won four straight from 1975 to 1978.

The tournament was played on the grass courts at Forest Hills from 1968 until 1974, when the site turned to a clay surface that was utilized until 1977. The next year, the U.S. Open moved to a new facility -- the USTA Tennis Center -- in Flushing Meadows, N.Y., where Jimmy Connors defeated Bjorn Borg in the men's final to earn the 1978 trophy. Having also won in 1974 and 1976 Opens, Connors holds the distinction of being the only player to win the U.S. Open on three surfaces.

Connors would go on to claim two more titles, after another left-handed American, John McEnroe, won three straight between 1979 and 1981. Foreign players proved successful throughout the rest of the decade, with Ivan Lendl and Stefan Edberg winning multiple men's titles and Martina Navratilova and Steffi Graf combining to take six of seven women's events between 1983 and 1989.

In 1997, the Arthur Ashe Stadium, the new center court on the grounds of the National Tennis Center, became the centerpiece for the annual event, allowing more than 20,000 fans to witness matches on the main court. Nine years later, the host facility was officially renamed the USTA Billie Jean King National Tennis Center in honor of the pioneering woman who captured 13 U.S. Open titles in singles, doubles and mixed doubles competitions.

King helped boost the prize money associated with the women's game, and by the new millennium the men's and women's events at the U.S. Open were multimillion dollar competitions. The 2009 U.S. Open's total purse topped $21.6 million, marking the third consecutive year the tournament's prize money increased by $1 million. In addition to the base purse of $21.6 million, the top three men's and top three women's finishers in the Olympus US Open Series had the opportunity to earn up to an additional $2.6 million in bonus prize money at the U.S. Open, providing a potential total payout of $24.2 million.

The USTA Billie Jean King National Tennis Center is a tennis complex located in the Flushing Meadows section of Queens, N.Y., that hosts the U.S. Open tennis tournament each year (in August and September). The center features two of the largest tennis stadiums in the world -- the Louis Armstrong Stadium and the newer Arthur Ashe Stadium (with a capacity over 23,000), which became the site's center court in 1997.

Originally built in 1978 after USTA incoming president Slew Hester suggested Armstrong Stadium and the surrounding area be used to build a home for the U.S Open, the National Tennis Center has grown to include over 30 outdoor courts -- 22 of which are used for the U.S. Open -- that are constructed with the DecoTurf acrylic (hard-court) surface. The overall site features 12 indoor courts and four climate-controlled clay courts available for public use.

With a regular staff of certified tennis professionals, the National Tennis Center conducts a number of instructional events and USTA programs throughout the year. The site is open to the public seven days a week for 11 months of the year, closing only on Thanksgiving, Christmas and New Year's Day.

Besides the U.S. Open, the National Tennis Center hosts college invitational events, sectional tournaments for juniors and other USTA divisions and the New York state high school tennis tournament each May. 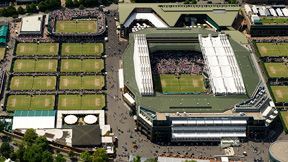 ESPN.com Topics brings you full coverage of the biggest events in tennis throughout the year.