May
5
By Brett Edgerton | ESPN.com 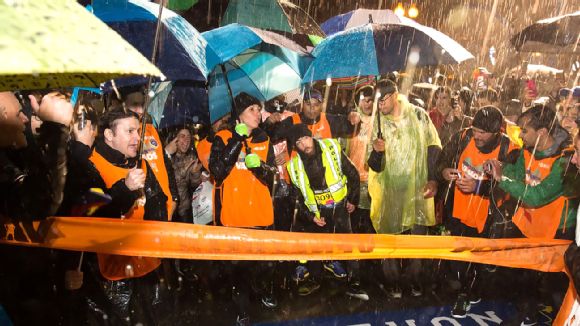 We could tell you all about Maickel Melamed, a 39-year-old from Venezuela who hasn't let muscular dystrophy, a condition that makes moving around difficult, stop him from marathoning.

We could tell you that he's completed marathons in New York, Chicago, Tokyo and Berlin but that it's taken too much of a toll on him physically and that Boston was to be his final race ever -- a fitting tribute to the city whose famed Children's Hospital gave him life-saving treatment as a child.

We could tell you about how it took him 20 hours, but that he finished Monday's marathon on Tuesday, in the middle of the night, with volunteers helping him out with umbrellas and a crowd still cheering him on.

But it's better told through the words of an eyewitness and two videos from a magical night in Boston.

Here's how photographer Michael Blanchard described it on Facebook:

Last night I watched a report by Jorge Quiroga about a man from Venezuela who was still running the marathon long after everyone had packed up and went home. ... Since I am up all night anyway, I decided to head into town to try and photograph him crossing the finish line. When I got there I was told by a cameraman that he was still in Brookline. Knowing it would be a while before he made it to Copley Square, I drove to Beacon Street to see what the deal was. Soon I came upon about 100 people walking (very slowly) and singing while cars passed by them. It was truly one of the most amazing things I've ever seen. I walked with them over the Fenway bridge, through Kenmore Square and up Commonwealth Ave until we turned the corner to Boylston. That's when the torrential downpours started and did not stop. Somehow everyone ignored the rain and kept going. At around 4:30am, 20 hours after starting the race, Maickel crossed the finish line of the The Boston Marathon. I'm not sure why I went to see this, but I'm glad I did (despite my two rain soaked non-working 5DMIII cameras and a parking ticket). Hopefully Maickel brightened your day a bit!

He certainly has. Watch for yourself as Melamed is cheered on by the crowd as he nears the finish line.

And here's video of him, after 20 grueling hours, crossing the finish line for likely the final time in a marathon.