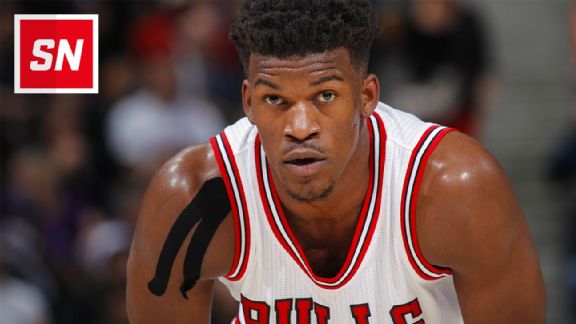 Chicago Bulls wing Jimmy Butler has a lot to be proud of. Drafted 30th overall in 2011, the former Marquette player has outperformed nearly everyone's expectations as a pro, earning himself back-to-back spots on the All-Defensive second team, a 2015 NBA All-Star berth and last season's Most Improved Player award. He also signed a five-year, $90 million deal this offseason.

All of this came after a difficult upbringing -- as documented in 2011 on this site -- in which his mother kicked him out of the house at 13 with the words: "I don't like the look of you. You gotta go."

But Butler does not want to dwell on any of that.

From Bryan Smith in Chicago Magazine:

Still, he loathes reliving the past -- so much so that he has removed the rearview mirror on his car (yes, really) as a symbolic reminder to never look back. His coach at Marquette University, Buzz Williams, says Butler was so sensitive about his upbringing that he swore Williams to secrecy while playing for him.

When I ask why he hates talking about the past so much, Butler shifts uncomfortably on the sectional in the grand San Diego house. "It's because I don't ever want that to define me," he says. "I hated it whenever it came up because that's all anybody ever wanted to talk about. Like, that hasn't gotten me to where I am today. I'm a great basketball player because of my work. I'm a good basketball player because of the people I have around me. And if I continue to be stuck in the past, then I won't get any better. I won't change, I'll get stuck as that kid. That's not who I am. I'm so far ahead of that. I don't hold grudges. I still talk to my family. My mom. My father. We love each other. That's never going to change." In fact, the day I visited Butler, his father was staying with him.

Now, we have no trouble with Butler's feelings nor his desire to make a symbolic gesture, but removing an essential car component might not be the best way to go about this. Perhaps if Butler makes a point to frequently check his sideviews and over his shoulder, he can get away with it. Still ... we wouldn't recommend it.

But hey, we're not about to tell him what to do. He's an All-Star -- and Mark Wahlberg's good friend, among many other things as captured in Smith's expansive piece.