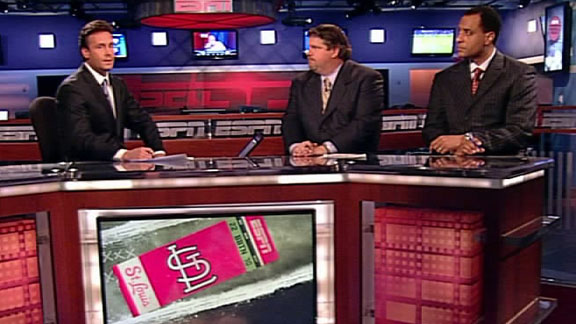 In what may be the least surprising admission of the past year, Mark McGwire has come clean about using steroids during his record-breaking 1998 season.

McGwire's admission comes at a busy time for the former slugger. His hiring as St. Louis Cardinals hitting coach and possible pinch hitter has led to further questions about his use of performance-enhancing drugs. Long considered a near shoo-in for the Hall of Fame, McGwire has been dogged by said questions, which (in SportsNation's eyes) have all but eliminated his current chances at a plaque in Cooperstown:

His refusal to "talk about the past" at an infamous Congressional hearing led to years of ridicule for the reclusive slugger, but now that he's come out in the open about his history with steroids, has SportsNation's opinion of him changed?

Was it a secret or something? I don't get it.

This is a good thing on two fronts. 1 - his team won't have to deal with the media circus that could of came with him not answering this question throughout the season. 2 - voters may now look up, instead of down, when HOF ballots come next year.

Good for him to admit it. The media will rip him apart and say maybe he shouldn't get in the HOF, but what the media won't write about is how they harassed him for years. They won't talk about how the media kept asking him if he would make a run at the HR record. Fans and the media pressured players to a certain extent. Did we put steroids in his body? No. But we practically asked him to.