An enterprising website has put up a digital billboard in Denver asking Broncos fans whether they would rather have Tim Tebow or Peyton Manning next season. This morning on First Take, Skip Bayless guessed that 90 percent would vote for Manning, while Jemele Hill thought Tebow might actually draw up to 30 percent of the vote. Hill also guessed that if Cam Newton were substituted for Tebow, he would garner roughly 40 percent of the vote. Are either of them right?

You can follow the billboard, but you'll have to leave your email address to vote. Make your picks here to see what the whole country thinks and then hover over Colorado to see what the hometown folks are saying.

How valuable is Cam Newton? 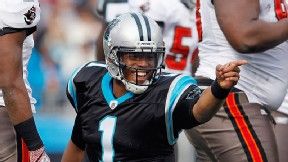