Continuing to pinch hit for A-Rod?

All of the talk about dropping Alex Rodriguez in the Yankees' batting order resulted in an unexpected outcome Wednesday night, as Joe Girardi's decision to pinch hit for A-Rod with Raul Ibanez paid off in grand fashion. Rodriguez is a sure-fire Hall of Famer and one of the greatest players of all time, but at this point in his career, he's not quite the player he once was. Should he expect to be replaced at critical junctures from now on, at least for the remainder of this postseason? 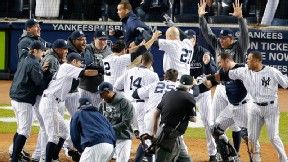 The Orioles have come back from worse deficits than this in the regular season, but they can't be feeling good about their chances after Game 3.