Who stood out in the opening weekend?

Monday morning headline: Stanford is off and running.

Gonzaga stayed with Stanford for a half Sunday, saddling the Cardinal with their first halftime deficit at home since Jan. 30, 2010, a stretch of 24 games at Maples Pavilion. Texas hung around, too, seizing on home-court advantage and a shorthanded opponent to stay within five points with 10 minutes to play against the Cardinal on Friday. 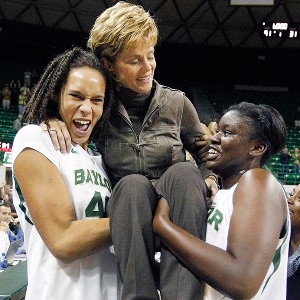 AP Photo/LM OteroKim Mulkey got a lift from 6-foot-8 Brittney Griner, left, and 6-4 Sune Agbuke after winning her 300th game.

But after three days of the 2011-12 regular season, it's pretty clear that if you want to knock down Stanford, you had best bring a knockout punch.

Testing itself while other contenders test their attention spans during the second half of blowouts against overmatched opponents, Stanford beat Texas 72-59 on the road without Nnemkadi Ogwumike (unspecified upper body injury). Then it beat Gonzaga 76-61 in large part because of the elder half of the Ogwumike sisters. With Gonzaga constantly looking to push the tempo and having already turned an early 24-14 deficit into a 30-29 lead, Stanford kept punching the ball inside for run-ending, soul-sapping baskets down low. Nneka finished with 33 points and 18 rebounds against Gonzaga, while younger sister Chiney followed up 16 points and 14 rebounds against the Longhorns with 19 points against the Bulldogs.

The Cardinal have a star capable of taking over a game and singlehandedly reversing momentum. And they have a team that can win without her.

That's not bad work for a season barely 72 hours old.

Best individual weekend performance: Alex Gensler. The elder Ogwumike probably deserves top billing for her effort against Gonzaga, but since we've been over that, it's worth giving some space to Duquesne's Alex Gensler. The senior guard made sure the Dukes avoided a potential opening stumble by scoring a career-high 33 points, including a career-best eight 3-pointers from the new line, in a 74-70 win at Saint Francis. Part of what landed Duquesne in the preseason mid-major top 10 is the balance the team displayed last season, with five players averaging between 8.2 and 12.6 points per game. But if balance is nice over the span of a season, sometimes there's no substitute for a single hot hand over the span of 40 minutes.

Best team weekend performance: Maryland. It isn't going to soothe the sting of an embarrassing loss in a game of more import in the NCAA tournament last spring, but Maryland's 72-53 win against Georgetown on Sunday is the only game that matters to the current state of affairs for both teams. The Terrapins exploited everything a team is supposed to try and exploit against the Hoyas, limiting Sugar Rodgers to 1-of-12 shooting, forcing other shooters to beat them (the Hoyas hit 2 of 17 3-pointers) and dominating the glass. Alyssa Thomas and Tiana Hawkins combined for just two fewer rebounds than Georgetown. An 84-46 win against Loyola to open the regular season isn't without merit, either. There are contending teams that will register far less convincing wins against far more inferior teams in the season's opening weeks.

Best individual performance, coaching division: Kim Mulkey. Granted, it wasn't Mulkey's toughest assignment -- although Chattanooga should have a much better season than the final score in Waco indicates -- but win No. 300 is a big deal. Baylor's 91-31 demolition of the Mocs provided Mulkey her milestone win. And come to think of it, trying to balance while being carried on the shoulders of 6-foot-8 Brittney Griner and anyone else on the roster, as Mulkey was after the win, might be among the tougher challenges of her career.

Biggest surprise: Villanova beating Michigan State. Mulkey wasn't the only coach to hit a milestone over the weekend. In fact, Villanova's Harry Perretta doubled her up by collecting win No. 600 in Sunday's 76-47 win against Iona. He's just the seventh Division I coach to total 600 wins at one school. But nobody is probably more pleased than Perretta himself that the milestone was overshadowed by win No. 599. That came courtesy of a 75-64 win against No. 25 Michigan State on Friday, the first against a ranked foe for the Wildcats in more than two years.

Villanova's next three games come at Marist and Princeton and home against Delaware, quality opponents that should test what Perretta has on his hands with Rachel Roberts and Lauren Burford (a combined 13-of-24 shooting from the 3-point line through two games).

Beyond the headlines: Xavier tries to stay in the game: No team took a bigger offseason hit than Xavier, which dropped from No. 5 in the final AP poll last season to the suburbs of oblivion. We know first-year coach Amy Waugh's hand doesn't include two aces, Amber Harris and Ta'Shia Phillips, but the Musketeers could at least stay at the table if forwards Amber Gray and Marquette transfer Jessica Pachko form a productive partnership and guard Tyeasha Moss emerges as a go-to player. Moss had 22 points, 12 rebounds and four assists in an opening win against Eastern Kentucky, but she used 17 shots to get those points. Against a schedule still loaded with the kind of opponents you book when you have two WNBA giants, the defenses are only going to get more difficult, starting with Monday's trip to Mississippi State and Sunday's visit to Louisville.

Nobody expects Xavier to get back to the rarified air of recent seasons, and Waugh is going to pile up some early losses to go along with her first career win. But if you forget who used to here and only look at the talent that is here, there is at least enough potential to make this a team worth keeping tabs on as Atlantic 10 season nears.

Setting up the week to come (Monday-Friday)

• Louisville at Texas A&M (ESPNU, 4 p.m. ET Tuesday): The matinee between teams with a lot of familiar faces on the perimeter -- Tyra White, Sydney Carter, Becky Burke and Tia Gibbs among them -- also features some new faces in the paint. Texas A&M's Kelsey Bone managed just 11 points and one rebound while battling foul trouble in her first game for the Aggies, while Cierra Warren scored 18 points in just 12 minutes for Louisville in an opening win against Missouri State. It appears Louisville will be without Shoni Schimmel, forced to sit out two games as a result of playing in a non-sanctioned 3-on-3 tournament, but highly touted freshman Sara Hammond stepped into the void with 13 points and 13 rebounds in the team's first game.

• Miami at Tennessee (ESPN2, 6 p.m. ET Tuesday): This one is the definition of new school against old school when it comes to program prestige. Shenise Johnson was, well, Shenise Johnson in Miami's opener against Texas-Pan American, falling one assist shy of a triple-double and two steals shy of a quadruple double (she finished with 20 points, 13 rebounds, nine assists and eight steals -- and just nine field-goal attempts). But the question in Knoxville is what can the supporting cast -- namely Stefanie Yderstrom and Morgan Stromando -- do for Johnson and Riquna Williams. We know the Hurricanes have the stars to compete for a title. This is the first of many chances for them to prove they have a supporting cast fit for a trip to Denver.

• Georgetown at LSU (Wednesday): Yes, Georgetown can't afford many shooting performances like the one Sugar Rodgers had against Maryland on Sunday. But in arguably the team's brightest moment last season, when it pushed Connecticut to the limit on a neutral court in the Sweet 16, Rodgers shot a woeful 3 of 17 from the floor. The rest of the team shot 21-for-45 that day. So as much as we wait to see how Rodgers bounces back against an always-tough LSU defense, we also wait to see how her supporting cast responds (at least outside of Tia Magee, who more than held her own Sunday).

• Penn State at Delaware (Thursday): There is some meat on Delaware's nonconference schedule this season, meaning plenty of opportunities to see Elena Delle Donne against quality opposition. That wasn't so much the case as she poured in 33 points in an opening win against Rhode Island, but this game is the best of all worlds -- a opponent that can challenge her physically but which has little interest in slowing down the game.

• South Dakota State at Middle Tennessee (Thursday): A lot of coaches for successful mid-major programs hold to the principle that it does them little good to play each other, the loser incurring more damage than the winner reaps benefit. That's not the case for South Dakota State's Aaron Johnston and Middle Tennessee's Rick Insell, and the sport is better for it. I'm intrigued to see Ashley Eide's second line after the Jackrabbits junior put up 27 points (with eight turnovers) in a win against Utah State.