Tennessee has a heck of a role model when it comes to leadership under adversity.

During a timeout in the opening game of Sunday's Maggie Dixon Classic between Baylor and St. John's, Tennessee coach Pat Summitt made her way onto the court at Madison Square Garden to accept an award named for the late coach and given to members of the women's basketball community fighting particularly courageous battles. Even in the midst of a game proving to be closer than most expected, the players and coaches of both teams broke their huddles, stood and applauded, one testament in a day full of them to just how universal is the support for the legendary coach of the Lady Vols as she battles early onset Alzheimer's. 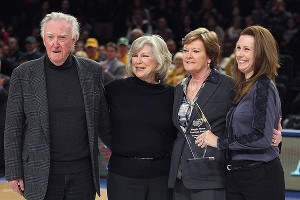 By comparison, playing 40 minutes of basketball without a freshman point guard is hard to file under the category of a hardship. On the other hand, the essence of Summitt's battle -- to some degree the essence of her career -- is that you fight the battles in front of you, no questions asked and no excuses given.

For Summitt's team in the second game of Sunday's doubleheader, that meant playing its first game without Ariel Massengale.

For the first time in a long time, Tennessee has a point guard who fits all the classic criteria of the position and could potentially fit them as well as anyone playing the position at the moment. In her first six games in orange, Massengale totaled 35 assists and just 15 turnovers against a schedule loaded with postseason-caliber foes.

But the Lady Vols will be without Massengale for two to three weeks because of a dislocated finger, a stretch that includes road games at Rutgers, UCLA and Stanford.

Not having a point guard played a big part in Tennessee's downfall in the NCAA tournament a season ago, but that wasn't the case Sunday against a tournament-caliber team. It wasn't always pretty for a team with just nine assists, but they got the ball inside enough to earn 35 trips to the free throw line and score 50 points in the paint.

Shekinna Stricklen admitted some nerves in reprising the role of point guard she filled in recent seasons, possibly at the expense of her all-around All-American game, but between her efforts and those of scoring guard Meighan Simmons and even a wing with a good handle like Taber Spani, the Lady Vols got the job done.

"She's a great point guard," associate coach Holly Warlick said of Massengale. "You can't teach an instinct of a point guard. You just can't. That's a sign of what Ariel Massengale means to this team and what we needed. She's a great leader, but she leads by example. She's smart, she sees the open floor. You can't tell a guard everything to do, and a great guard -- a great point guard -- sees things. They get the ball to whoever needs it when they need it. That's what Ariel Massengale does.

"Look, Shekinna Stricklen, Meighan Simmons, they're very good guards, but they don't have probably the quality as a Massengale has. It doesn't matter if she's a freshman or a senior. That is not taught, what Massengale has."

It only gets more difficult Tuesday night against the pressure of Rutgers and C. Vivian Stringer's defense. But if the Lady Vols currently lack a point guard with skills that can't be taught, they do seem to have a surplus of players who are willing to learn.

Co-best individual performance, Maggie Dixon Classic edition: Brooklyn Pope. Is it more surprising that Pope led Baylor with 19 points in a win against St. John's, or that she didn't commit a single foul in 30 minutes on the court against the Red Storm? Pope averages 11.0 points and 7.0 rebounds per game, but even after her lengthy stay on the court Sunday, she does it all in just 18.2 minutes per game. Run those numbers for a full 40 minutes and Pope would average 24.2 points and 15.4 rebounds -- Griner-esque, to say the least. So why the limited work? Well, before avoiding the whistle against St. John's, Pope also averaged 4.6 fouls per 40 minutes, emblematic of an overzealousness that often earned her a place behind Kim Mulkey on the bench.

Co-best individual performance, Maggie Dixon Classic edition: Alicia Manning. The senior forward isn't a one-for-one swap for Massengale when it comes to her position, but Manning saw a lot more playing time off the bench as part of a rotation that didn't include the freshman point guard. All she did with the newfound workload was contribute 12 points, 12 rebounds and four steals. For programs like Tennessee and Connecticut, there is a fine line between overrating role players who look better because of their surroundings and underrating those same sort of players who fall in the shadow of stars. Manning has always seemed like she fit the latter category more than the former, an athletic 6-foot-1 forward with some touch and an endless motor. 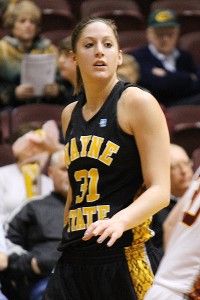 Best blast from the past: Ashley Arlen, Wayne State College. Time and resources make it difficult to dwell on the happenings in Division II, but Big 12 fans might well remember Arlen's name. As a freshman, she averaged 3.5 points and 3.1 rebounds per game in regular minutes for an Iowa State team that advanced to within a game of the Final Four. I was fortunate enough during a weekend trip to South Dakota to find Arlen back on a path that could end with a trip to the Final Four, albeit one in San Antonio this year and not Denver.

Arlen transferred to Div. II Wayne State (Neb.) after one season in Ames, Iowa, and now averages better than 20 points per game for a team that entered the weekend ranked fourth. In Friday's game against Northern State (S.D.), where our paths crossed, she went for 27 points, six rebounds, three blocks and three steals. She still looked every bit a Division I player as a 6-2 forward with athleticism and a soft touch from beyond the arc, but she also looked and sounded about as happy as a basketball player can.

Wayne State coach Chris Kielsmeier won a national championship in Division III before taking his current job and isn't taking the gift of three seasons of Arlen for granted.

"She's a tremendous leader and extremely competitive," Kielsmeier said of a player who last season became Wayne State's first All-American. "She loves the game, wants to continue to play the game overseas with any opportunities that she can. … You're fortunate to be able to recruit someone like that, and she's a special player that has changed our program."

We so often hear about the beginning of the story when a player leaves a program looking for a different fit, but it was good to see the other end of the timeline.

The week ahead (Monday-Friday)

Tennessee at Rutgers (ESPN, 7 p.m. ET Tuesday): Rutgers doesn't lack for opportunities when it comes to big games against teams like Connecticut and Notre Dame in the Big East, but this is a chance to score as big a win as the program has had in quite some time. The Scarlet Knights will probably rise or fall based on perimeter play, and how much they can frustrate the Lady Vols without Massengale, but the boards are also a point of interest. Can a Rutgers team without a great deal of size maintain the rebounding advantage it has held all season?

DePaul at Princeton (Tuesday): This game looked more appealing before DePaul dropped Sunday's game by a sizable margin and Princeton suffered a surprising 13-point loss at Navy. But a win against the Blue Demons would still be a major achievement for the Ivy League powerhouse. And lest it go unsaid, credit to DePaul's Doug Bruno for not only going to play at Princeton but playing at Illinois State less than a week later.

UCLA at LSU (Tuesday): UCLA's remaining schedule before the end of the year: at LSU, versus Tennessee, at Temple, at Saint Joseph's, versus California, versus Temple. Good luck with that. But for all the obvious reasons, you know this week's game has special meaning for both Lady Tigers coach Nikki Caldwell and the Bruins she left behind.

Arizona State at DePaul (Friday): With the holidays approaching and many schools immersed in finals, it's a lean week of games of any kind, so we'll give the Blue Demons a second spot. Doug Bruno's team is in the middle of a tough stretch of the schedule and welcomes an Arizona State team off to a surprising 7-1 start but playing just its second road game.