The headlines Monday morning are about Baylor beating Connecticut and Notre Dame beating Kentucky, but there's still cause to consider an abbreviated look at other weekend action. 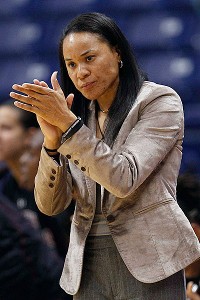 Frank Victores/US PresswireCoach Dawn Staley liked what she saw Sunday when South Carolina held No. 16 North Carolina to 48 points and improved to 9-2.

Best team performance: South Carolina. There wasn't much heft to the 8-2 record South Carolina brought to Myrtle Beach for the neutral-site clash with North Carolina, but a 79-48 win presumably hit the ACC team like a ton of bricks.

The Tar Heels played two games of consequence this season, against Penn State and South Carolina, and lost both of them without being within single digits on the scoreboard over the final 10 minutes.

Dawn Staley's Gamecocks did just about everything right, shooting 47 percent, claiming a 47-30 advantage in rebounds, turning over the ball just nine times and getting 21 points from La'Keisha Sutton and 20 points from Markeshia Grant.

Considering a third of the team's wins came while scoring 60 or fewer points, defense still rules for Staley, but at least it's nice to know the offense has this in it.

Best individual performance: Gennifer Brandon, California. It came in a loss against Ohio State, California's third of the season by three or fewer points against a ranked opponent, but Brandon's line of 24 points and 24 rebounds in 33 minutes jumps off the page. Brandon entered the weekend tied for 48th in the nation in rebounding. Her average went from 9.6 per game to 10.9 per game after her effort against the Buckeyes, the latter average bettered by just 10 players entering the weekend.

Brandon might dwell, as players are wont to do, on the shot she missed in the closing seconds to try to force overtime, but it's safe to say her team wouldn't have been in that position in the first place without her points and rebounds.

It's difficult to believe it has been nearly two decades since he took Vanderbilt to the Final Four in 1993, but he keeps piling up victories. He needs 11 more of them to make Ohio State the most successful stop of a career that includes St. Joseph's and Vanderbilt.

Best comeback: Duquesne against West Virginia. Duquesne beat a nationally ranked Ohio State team on the road a season ago during the holiday portion of the schedule and proceeded to miss the NCAA tournament out of the ultra-competitive Atlantic 10. So Dukes coach Suzie McConnell-Serio wasn't ready to put any special labels on Saturday's 61-55 win against an unranked West Virginia team. But it sure beats losing, an outcome that seemed certain when Duquesne trailed by 17 points early in the second half.

Behind clutch 3-pointers from Alex Gensler, big baskets from Wumi Agunbiade, unsung role play from Jocelyn Floyd, Vanessa Abel and Ahjah Hall and a 2-2-1 press that left the Mountaineers flummoxed and coach Mike Carey apoplectic on the bench, the Dukes closed the game on a 38-15 run and claimed the win.

Best early start to the week: Northwestern. Sunday was only the beginning of things for Northwestern, which played UNLV in the first of three games in three days in Las Vegas. But it was a good start. The Wildcats improved to 9-1 with a 79-49 win against a Lady Rebels team that entered with just two losses on the season and a victory against Big Ten side Iowa.

It seems there is life after Amy Jaeschke for Northwestern, in large part because Joe McKeown is still the man in charge. Highly touted freshman Morgan Jones is living up to the hype and finished with 18 points, seven assists and three steals Sunday, but holdover Kendall Hackney is the star so far. Hackney scored 22 against UNLV, her fourth game in a row with at least 20 points. A win Monday against Kansas State and Northwestern would be 4-1 against teams from BCS leagues.