Kentucky loses but has no reason to panic 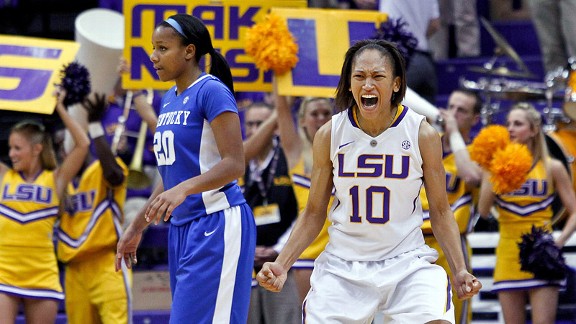 That was the 1982-83 season, and the nearly three decades between then and now represent one more reason a 61-51 loss at LSU on Sunday is hardly cause for panic.

Good teams lose games, particularly in places like Baton Rouge. That said, you take the good with the bad when you apply for membership in college basketball's elite. And in at least cracking open the door it could have slammed shut on the rest of the SEC, Kentucky showed some familiar, if far from crippling, vulnerabilities on the road.

LSU turned over the ball 26 times against Kentucky's pressure, three fewer turnovers than teams average this season against the Wildcats but hardly a model of ball control. The same was true of Middle Tennessee, which turned over the ball 28 times in a 70-58 win against Kentucky in late December. Even Notre Dame gave away the ball 22 times in beating the Wildcats, who never relent in running wave after wave of pressure at foes.

So what's the catch? In addition to all those turnovers forced, and the total is 701 and counting through 24 games, Kentucky has allowed opponents to record just 218 assists. But Notre Dame, Middle Tennessee and LSU, the three teams to come away with wins, accounted for 48 of those assists, nearly one out of every four against Kentucky this season. The Lady Tigers fed the turnover machine, allowing the Wildcats to score 26 of their 51 points off them, but they also recorded assists on 11 of 17 field goals, shot 57 percent from the field and went to the line 31 times. Kentucky is going to get its turnovers more often than not, but it seems to be the other possessions, the ones that end in bad shots and flustered sets, where opponents give away the game. Credit Adrienne Webb and the rest of the Lady Tigers for not joining that list on this day in Baton Rouge.

Yet much as Bruins coach Cori Close might have wished to pull her key players for those final minutes of the blowout, for reasons of recuperation as much as mercy, she had no such options.

At least the first-year coach didn't have to waste much time learning names.

In the race for second in the Pac-12, which is what the conference boils down to with Stanford around, UCLA remains in the thick of things at 7-4, one game behind California in advance of Thursday's trip to Berkeley. The remaining schedule isn't particularly friendly to UCLA, beginning with the back end of the Bay Area trip and a game at Stanford, but even the opportunity to write their own ending is a major achievement for a team with essentially six players.

Three players -- starters Jasmine Dixon and Atonye Nyingifa and reserve Moriah Faulk -- are out for the season with injuries, while two top recruits never made it to Westwood after former coach Nikki Caldwell left for LSU. The roster carnage left the Bruins at 8-10 overall and 3-4 in the league following a loss against Oregon on Jan. 21.

But the four-game winning streak that was extended Saturday has a lot to do with six players doing all they can and one player, in particular, filling the role of at least two. Junior Markel Walker finished with a triple-double against the Cougars: 14 points, 15 rebounds and 10 assists. In the four wins, she averaged 17 points, 12.3 rebounds and 5.5 assists.

Weekend's best individual performance: Chelsea Poppens, Iowa State. There's a good story brewing at Iowa State, one that will be a great story when coach Bill Fennelly is able to tell it at full volume. With Fennelly undergoing treatment for a cancerous lesion on his vocal cords, Iowa State dropped its first five conference games (a rugged opening stretch with road games at Oklahoma, Kansas and Texas and no relief at home against Baylor and Texas A&M).

Well, the Cyclones have won four of five since that opening stretch, including a 71-56 victory against Texas on Saturday. Poppens totaled 27 points and 10 rebounds in just 24 minutes against the Longhorns, hitting 9-of-11 shots from the floor. The junior forward topped 20 points three times in the past five games.

Michigan's best import: Porsché Poole, Michigan State. A kid from Ohio who shares a spelling, if not a pronunciation with the most ostentatious of foreign import automobiles? It doesn't seem like a perfect match, but Poole is the heart of Michigan State's resurgence. A week after rescuing the Spartans from a potential fifth consecutive defeat with 32 points, six rebounds and six assists in a win against Penn State, she came up with 23 points, nine rebounds and five assists in a 65-63 victory against Michigan. In what had been essentially a one-possession game for the entire second half, Poole cut a four-point deficit in half with 2:14 to play, assisted on Lykendra Johnson's tying basket with 53 seconds remaining and hit the winner with 3.9 seconds to play.

Best defense on campus: Davidson. The Wildcats are 10-2 in the Southern Conference and in the thick of the title race with Appalachian State and Chattanooga. They're also second in the conference in field goal defense, so Davidson knows its way around a stop or two. But the first-half line from Saturday's game against Charleston still stands out: Davidson 24, Charleston 4. The Wildcats won the game 46-23, holding Charleston to 10 percent shooting. For the record, Davidson's football team gave up more than 23 points six times this season.

Part of the club: UTEP. Bowling Green, Delaware, Green Bay, Miami, Stanford and UTEP all reached 20 wins over the weekend (Florida Gulf Coast and Gonzaga got there Thursday). The last of those might be the one flying most under the radar. UTEP doesn't have the schedule strength of some of its mid-major counterparts, but with a 20-2 record, two 10-game winning streaks and a perfect 9-0 record in Conference USA, it is doing something right. For one thing, the Miners are ensuring opponents don't do much right. UTEP is limiting teams to 32.5 percent shooting and forcing 18.7 turnovers per game.

The (busy, busy) week ahead

Maryland at Georgia Tech (Monday): After a loss against Virginia Tech on Jan. 26, Maryland coach Brenda Frese said her team had an open discussion as to which direction it wanted to go from there. Maryland blitzed Boston College in its only game since that loss, but Monday's game against a Georgia Tech team half a game ahead in the ACC standings will reveal more about the answer. It didn't have Alyssa Thomas in the game against the Virginia Tech, but she was back against Boston College and had 24 points and 11 rebounds in an earlier win against Georgia Tech.

North Carolina at Duke (ESPN2/ESPN3, 7 p.m. ET Monday): With road games at Duke on Monday and at Miami on Wednesday, North Carolina could make a run at the story of the regular season or drop completely out of the ACC discussion before Valentine's Day and risk playing itself onto the NCAA tournament bubble against a backloaded schedule. No doubt Elizabeth Williams will figure prominently in any success for the Blue Devils, but keep an eye on Allison Vernerey. No Duke player has a better career scoring average against the Tar Heels than Vernerey (9.4 points per game in five games).

Oklahoma at Baylor (Monday): Things didn't go so well for the Sooners in the first game in Norman, and the return match in Waco isn't likely going to be any better if Aaryn Ellenberg, Whitney Hand and Morgan Hook shoot 2-of-16 from the 3-point line again. Then again, a lot of teams keep digging deeper when they find themselves in an early hole against the nation's top-ranked team. Baylor was No. 12 in the nation in 3-point field goal defense entering the weekend, but no team ranked in the top 30 in that statistic had faced more 3-point attempts.

Oral Roberts at South Dakota State (Monday): There are a lot of high-profile games on Monday's schedule, but there's a good one slightly off the radar in Brookings, S.D. The home team has a two-game lead on Oral Roberts in the Summit League standings, but South Dakota State's lone conference setback came in a 71-65 loss at Oral Roberts. In fact, the Jackrabbits have dropped five regular-season games in a row against Kevi Luper and the Golden Eagles, dating back to the 2009-10 season.

American at Lehigh (Wednesday): Seeding is everything in one-bid leagues without a neutral site for the conference tournament. American (8-0) can all but wrap up the regular-season title and No. 1 seed in the Patriot if it gets a win on the road against second-place Lehigh (6-2). After some close calls early, including a 55-49 home victory against Lehigh, American won each of its past three conference games by at least 23 points.

Tennessee at Vanderbilt (Thursday): Kentucky's loss against LSU opened a door to the SEC title that seemed to close when Tennessee dropped a stunner at home against South Carolina midweek. The Lady Vols are strong overall against the 3-pointer (giving up shots at just a 25.8 percent clip), but both Notre Dame's Skylar Diggins (5 of 7) and South Carolina's Markeshia Garant (7 of 12) punished them recently. It was a high point in an otherwise decisive loss for Vanderbilt, but will Christina Foggie (5 of 12) be able to replicate her shooting from the team's first meeting?

Gonzaga at BYU (Thursday): Given Stanford's domination in the Pac-12, this might be the best conference game west of the Continental Divide this season. Or at least one half of the best home-and-home series. BYU bounced back from a surprise loss at Pepperdine on Feb. 2 to rout Saint Mary's on Saturday. That helped create a little breathing room between Gonzaga (10-1), BYU (9-2) and the rest of the conference. The Cougars get their next four games at home before a trip to Gonzaga to wrap up the regular season.

Fairfield at Marist (Friday): It likely won't be the case by the end of the night Monday, but Marist opens the week in the unfamiliar territory of second place in the MAAC, half a game behind Fairfield in advance of Friday's tilt (Marist could pull into a tie with a win when it hosts Saint Peter's on Monday). The Red Foxes dropped a 48-44 decision at Manhattan on Saturday, ending a 34-game regular-season conference winning streak.