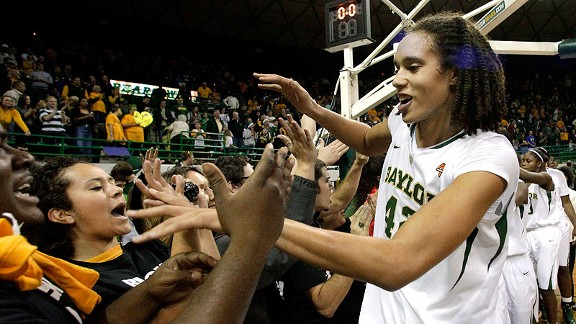 Remember Nike's "Little Rascals" commercials featuring WNBA stars? You don't? Well, then go to YouTube. If you do, recall the one in which the bossy little girl grills Cynthia Cooper for an explanation of why she pulled up for a 3-pointer on the break rather than passing to Tina Thompson on the block.

"Because I was open," an exasperated Cooper finally says. But that doesn't satisfy the kiddo.

In fact, Cooper could have said, "I could make a strong case for me taking the 3-pointer because I'm a great shooter, and I could also do the same for passing to my post player because she's terrific, too. Neither would have been a wrong decision, so I really shouldn't have to defend it."

Of course, that wouldn't have made such a funny commercial. But it's a pretty good answer much of the time when you're dealing with a variety of topics, including player or coach of the year in various sports. There is usually more than one qualified candidate, and good arguments can be made for each one.

However, in the end, if you're a voter for such an award, you have to make a decision. And in regard to national player of the year, if the vote was right now, I would pick Baylor center Brittney Griner.

What about Stanford senior post player Nneka Ogwumike? Notre Dame junior guard Skylar Diggins? Delaware junior guard/forward Elena Delle Donne? Each of them will get votes, and those absolutely can be justified.

I was leaning toward Ogwumike in the preseason, and she hasn't done anything at all to lose the award. But Griner still has moved to the top of the list. In the end, I keep coming back to this: Has any player performed more consistently at a higher level and led her team to more success this season than Griner? It's still a close call, isn't it?

Baylor is outscoring its foes by an average of 80.4 to 50.8 this season. Baylor is on its way to being the third Big 12 team to go undefeated in league play -- following Oklahoma in 2006 and Nebraska in 2010 -- and also projects to be stronger in the NCAA tournament than those squads, both of whom lost in the Sweet 16.

Throughout this run of perfection, Griner -- named Monday as one of the 21 finalists for the U.S. Olympic women's hoops team -- has been like clockwork. Through the most recently updated NCAA statistical rankings on Sunday, Griner is seventh in scoring and first in blocked shots. She's in the top 35 on the boards, in part because that's a chore she shares with two other very good rebounders for Baylor: Destiny Williams and Brooklyn Pope. Griner has not fouled out this season.

She simply doesn't have bad games, with averages of 23.1 points, 9.6 rebounds and 5.4 blocks. Although it's true you could say that about the other top candidates for player of the year, too, as all of them have their teams atop their respective conferences.

Delle Donne, who is such a complete, versatile player, is going to have some support for sure in challenging Griner for the award. The 6-foot-5 Delle Donne seems to keep getting stronger as the season wears on.

She is averaging a Division I-leading 28.8 points for the Blue Hens, who are in front of the Colonial Athletic Association at 14-0. She's also getting 10.4 rebounds per game.

Thursday, she had a monster of a game: 42 points, 14 rebounds and six blocked shots against Hofstra, a worthy league opponent, in an 89-79 victory. Delle Donne now has scored 40 points or more four times this season.

Her numbers are majorly eye-popping, especially considering her CAA opponents have tried all possible defenses to stop her, save putting her in handcuffs. (If Hofstra had tried that, she probably would have scored only 24 points.)

Diggins' Irish suffered an unexpected loss to West Virginia, but they are still 12-1 in the Big East with another matchup coming Feb. 27 against UConn, which is 11-1 in the league.

At this point, the Stanford fans are probably jumping up and down screaming, "What about Nneka?" Your frustration is understandable. You aren't too happy that folks accidentally still keep calling the conference the "Pac-10" (it's kind of a hard habit to break, though, at least for the first season) and that doubters continue to question the difficulty of Pac-12 competition. Why should Stanford be penalized for crushing the league again?

Nneka Ogwumike is averaging 22.3 points and 10.7 rebounds. Not far behind is her sophomore sister, Chiney (16.0 ppg, 10.3 rpg), who seems certain to be a candidate for national player of the year next season.

The Cardinal are 13-0 in the Pac-12, far and away in the lead. Their only loss of the season was in November to Connecticut at the XL Center in Hartford.

Would you be wrong to go with any of these four -- Griner, Nneka Ogwumike, Diggins or Delle Donne -- as your player of the year? Not at all. And let's also reiterate that this decision doesn't have to be made today, we're still just in mid-February.

But the leader of the pack is Griner. With several great choices, she's still the favorite.