More than NCAA bids are on the line 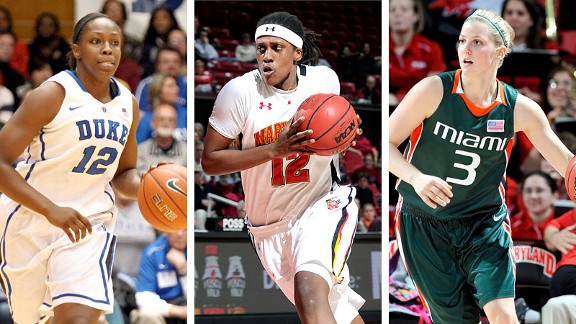 Getty ImagesTeams from the ACC -- Duke, Maryland and Miami -- have a hold on three of the No. 2 seeds.

Championship Week has arrived. For some, it is the best 11 days of the college basketball season. For others, conference tournaments are a way to kill time until the magic of March known as the NCAA tournament gets started.

But this year, even in the big conferences in which so many teams have already secured bids, the games still have huge meaning. The ACC, Big Ten and SEC tournaments, among others, open Thursday, and for some teams the ramifications are obvious. For others, the value isn't as evident, but these outcomes are no less important.

Virginia and North Carolina both must win their opening-round games to feel secure, but the Tar Heels could also really use a quarterfinal upset of Georgia Tech. UNC's résumé is OK, but there are bad parts: a lower RPI and some alarming margins of defeat. The Heels' status in the field is largely built on the limited competition for the final few spots, so beating a Top 25 team like the Yellow Jackets could go a long way.

But the ACC tournament will do more than decide the fate of teams on the bubble; it could actually have a lasting effect on how the NCAA tournament plays out. Here's why: Duke and Miami both figure to be at least No. 2 seeds in the NCAA tournament, and if chalk holds this week, they would meet in the ACC final. If when the time comes the Blue Devils and Hurricanes are both 2-seeds, whichever one (and remember, Maryland is in the mix to win the ACC, too) wins the ACC tournament is also likely to be higher on the selection board (right now, Duke is five, and Miami is six).

With so many host schools (Oklahoma, Vanderbilt, DePaul, LSU and Iowa State) as potential No. 7 or No. 10 seeds, and Maryland (another host) also being projected as a No. 2, there might be only one spot for another No. 2 seed not to be playing a potential second-round game on the road (Nos. 7, 10, 2 and 15 seeds are in the same subregional). So whichever team fairs better in the ACC will be given higher consideration to avoid that road situation. For example, in the most recent Bracketology posted Monday, Duke was higher-ranked on the selection board and therefore -- with only one subregional in that 7, 10, 2, 15 segment unoccupied by a host -- was given that one slot of two truly neutral opening games. Miami, because the Canes came in behind Duke in the ACC standings and on the selection board, got saddled with a potential second-round game against Vanderbilt in Nashville. If the Hurricanes win the ACC tournament, they would leapfrog Duke and get that higher consideration.

So you see, even though both are obviously in the field, and both are No. 2 seeds, triumphing this weekend could make a huge difference in how difficult a team's path is in the NCAA tournament. Not all same seeds are necessarily created equal.

The weekend in Indianapolis is big for a few teams, but for different reasons. Michigan needs to right the ship. Beating Illinois is a must. Beating Ohio State would really help create some safety for the Wolverines if there are some upsets in some smaller leagues (CAA, Horizon, Sun Belt).

The Buckeyes, meanwhile, also need a little bit of a run, probably to the Big Ten final, just to show the committee that what once made them a 23-3 team isn't gone. The blowout losses at Penn State and Nebraska last week have likely left some doubt, and Ohio State's seed will hinge on erasing it.

Penn State is the conference champ but might need to win the tournament title as well to be a No. 3 seed. With anything short of reaching the final, the Lady Lions are probably staring at a No. 4 and the potential burden of playing a No. 1 seed in the Sweet 16.

Tennessee and Kentucky are the two best candidates for the final No. 2 seed at this point. Given how evenly the résumés stack up, the better team in Nashville will win out. A meeting in the final would be the rubber match and would be the easiest way to solve any question as to which should be seeded higher. Of course, Georgia, South Carolina, LSU and Arkansas will have plenty to say about preventing that matchup, while improving their seed position for the NCAA tournament at the same time.

Arkansas and South Carolina might have the most to gain. Florida also can't afford a stumble against Auburn, and while a quarterfinal loss to Kentucky wouldn't hurt the Gators' chances to make the field, a win would seal the deal.