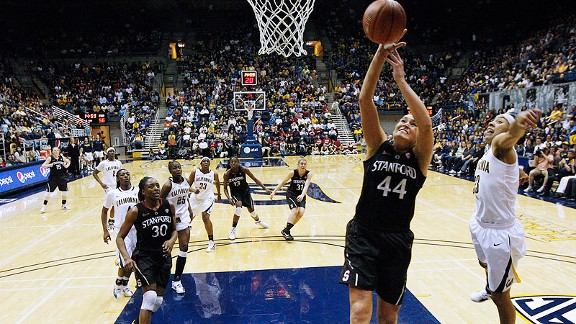 BERKELEY, Calif. -- Sunday's game between No. 2 Stanford and California meant nothing in the Pac-12 standings, affected not a single seed or matchup in the upcoming conference tournament.

But to say it meant nothing, well, that's simply not the case.

It meant something to Stanford, still in line for a No. 1 seed in the NCAA tournament after an 86-61 win in Haas Pavilion over the same Cal team that took it to overtime at home in late January.

It meant something to Cal (22-7, 13-4), the Bears still looking for one signature win for their NCAA résumé and smarting from a nationally televised pasting by their rival.

But the biggest question of the day is, what does it mean to the NCAA selection committee and its view of the Cardinal in the NCAA bracket?

Stanford coach Tara VanDerveer has been on the defensive for a few weeks now, advancing her opinion that her team has not been respected enough for what it has done this season -- a 28-1 record, 24 consecutive victories and a 79-game home-court winning streak.

But it's this last impressive stat that is the crux of the problem. Stanford has collected 75 straight wins over conference opponents, first in the Pac-10 and now in the new, but not-so-improved Pac-12.

So the question becomes, are the Cardinal padding their record against an inferior league, or are they just that much better than some decent teams? And does a 25-point victory over the second-place team in the Pac-12 cement the perception that the Cardinal are a powerhouse ready to go toe to toe with Baylor and Notre Dame, or show them to be the very biggest fish in a underwhelming pond?

"I hope people saw that we have a really strong team," VanDerveer said. "What do people look at? Yes, Nneka and Chiney [Ogwumike] are great players, we've got perimeter shooting, we worked really hard defensively -- Cal is an excellent offensive team -- I feel like we just need to keep everyone healthy. Our team knows we can play with anyone. We just want the chance."

Our team knows we can play with anyone. We just want the chance.

VanDerveer was upset several weeks ago when ESPN studio analyst Carolyn Peck suggested Duke should get consideration for a No. 1 seed because Stanford hadn't been challenged in the Pac-12, which has no other ranked teams and might get only two teams into the NCAA field. (Editor's note: Charlie Creme's March 5 Bracketology includes three Pac-12 teams, California, Stanford and Southern California.)

Over the past few days, in the San Francisco Chronicle, VanDerveer voiced frustration that her team likely will have to travel two time zones for the first and second rounds of the NCAA tournament, and could well end up playing on the home court of a lower seed -- while in all likelihood the other No. 1 seeds will be playing either at home (Notre Dame) or close to home on a neutral court (Connecticut in Bridgeport, Conn., and Baylor in Little Rock, Ark.).

But none of it would have mattered if the Cardinal couldn't win Sunday. Because a loss in Berkeley probably would have cost Stanford a No. 1 seed.

That scenario, however, was quickly irrelevant. Stanford ran to a double-digit lead less than nine minutes into the game, and led 43-24 at the half thanks to strong perimeter shooting (five first-half 3-pointers) and 19 points off nine Cal turnovers.

The Bears couldn't mount a comeback in the second half because they couldn't stop the Ogwumike sisters (who finished with a combined 34 points and 21 rebounds), and they didn't contain sophomore guard Toni Kokenis, who finished with 23 points, six rebounds and four assists. Junior post Joslyn Tinkle added 16 points and five blocks for Stanford, which also was 24-of-27 from the free throw line.

"I told Tara before the game that I almost called her after she made those comments to say 'Good for her,'" Cal coach Lindsay Gottlieb said. "If you put [the Cardinal] in any BCS conference, they are successful, they are at the top, they are really, really good. And I think the separator with them is that they have some of the best players in the country and they are incredibly well-coached. Period.

"I do think they don't get the credit they deserve, and I hope the rest of the country will not knock the conference, but give Stanford the respect that they deserve."

Cal has been a team on the fringes of the rankings all season. The Bears played close against Rutgers, Texas and Ohio State, and Stanford earlier in Pac-12 play, losing 74-71 in overtime at Maples.

But Stanford thoroughly outclassed the Bears on Sunday, and that's going to require a regroup heading into the conference tournament, where Stanford is an overwhelming favorite, and Southern California looms as a talented and desperate team that could be a dark horse candidate to snare the automatic bid.