The Huskies' only senior sat mostly dry-eyed at her locker room stall at the Pepsi Center following an 83-75 overtime defeat at the hands of the Irish on Sunday. She talked about being happy with a great run in her college career, but not feeling satisfied. Occasionally, tears welled in her eyes, but she fought them off.

"We gave this game away," Hayes said, upset by her team's turnovers -- she had six of the Huskies' 21 -- and failure to box out at crucial moments. "It's really hard; you want to be in that final game." 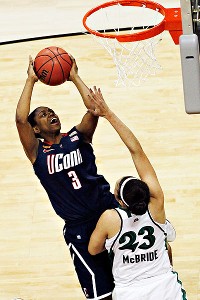 AP Photo/David ZalubowskiTiffany Hayes had 10 points and six turnovers in her final game for UConn.

Hayes was a complementary player her first three seasons at UConn, playing alongside the likes of Maya Moore, Tina Charles and Renee Montgomery. This year, Hayes was depended on more, and she came through much of the time.

In late January, she had back-to-back games in which she scored 35 and 33 points against Syracuse and then South Florida. It was a slice of Hayes at her slashing and jump-shooting best.

And in the Kingston Regional, she was pivotal in getting the Huskies into their fifth consecutive Final Four. Hayes had 32 points and 14 rebounds combined against Penn State and Kentucky in being named the regional's most outstanding player.

After the Elite Eight victory against the Wildcats, UConn coach Geno Auriemma said of Hayes: "Tiffany's grown up a lot. Being MOP was one of the highlights of her career. I'm thrilled for her."

And Hayes fully acknowledged then how her inconsistency over the years -- for which she got heat from both Auriemma and the UConn fan base -- had bothered her. She was hoping to prove at the Final Four that she wasn't going to follow a peak with another valley.

But Sunday's game is not one for which she'll have any fond memories. Along with the turnovers, Hayes took some out-of-control, wild-looking shots. Other times, she didn't seem to be looking to make a play at all, even when the Huskies really needed someone to step forward. Hayes was 4-of-11 from the field and 2-of-4 from the foul line for 10 points.

"We could have done a lot of things differently, but we're a fighting team and we didn't give up," Hayes said. "It was about all hustle plays for both teams. I don't want this to end now, but it was a good four years."

Hayes said when the buzzer went off, the thought that went through her mind was, "That's it. That's it for me. But I also knew that, like coach said, they are definitely going to be back."